I can’t put my finger on why, but for some reason I’m mesmorized by the Yeah Yeah Yeahs’ music video Maps (45mb mov).

I took this screen shot from the help screen in iTunes 5.0 this morning.

Here’s a little analogy I just came up with – I don’t know how good it is, but here it is: If someone were to steal your homework and hand it in – that would be theft. You would be left without something that you previously had. Infringement, on the other hand, is more like – if that same person copied your homework and handed it in. You might not like it, but you wouldn’t have been robbed of anything. There is a big difference.

Two weeks ago I posted about Plastic.com’s story on the perfect album. Some guy has tabulated all the albums mentioned in the comments and placed them online.

I came across a thread on Plastic today about the perfect album.

“[The perfect album is one] in which every track is great, each one worthy of being a hit. An album with not a single song I would skip past and nothing mediocre or even average.

Here’s my list of perfect albums (I included soundtracks because though they are not really albums, when I listen to them I don’t hit the skip button once):

Any others that you think I missed?

Can’t get enough? Here’s How You Remind Me of Someday.mp3. 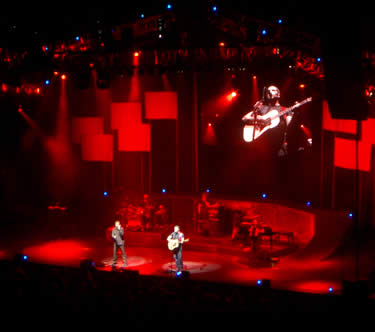 As promised here is my review from the BNL concert on April 1st in Calgary. It was great! As we were getting seated Anna questioned me about the tickets I purchased, “Do people that sit in these seats really get more nosebleeds?” Very funny. :)

The concert itself was a blast. Jason Plumb and Ron Sexsmith were the two opening acts. They seem like unknowns to me but Anna recognized Ron Sexsmith’s name and apparently Jason Plumb played for the Waltons — which I vaguely recall.

Anyway it was a great concert in which almost every song they played seemed like my favorite. I know I’m a big geek for this Canadian band, but whatever – it was fun. They played:

They weren’t planning on playing Alternative Girlfriend but got talked into it when someone in the audience held up a big sign that said quote/unquote Please let my husband drum Alternative Girlfriend with you. So they did. Ed told the audience that if he was at least half decent we should really cheer him on, but that if he sucked then we should beat him to a pulp. He was actually pretty good and it was really fun to watch. It’s stuff like that that makes a concert so memorable.

They had a fun choreographed shopping cart ballet in which they ran around with shopping carts, passed around boxes of cereal and made snow angels on the stage. They did three encore songs, which was more than the last time they were in Calgary, and I must say it was just a perfect concert. 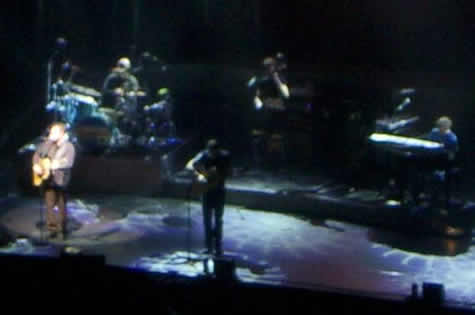 Ed wrote about the concert tour and specifically about Calgary’s show. Ed and Steve are by far my favorite bloggers in BNL – not just because they do the majority of the singing.

I read the headlines about Grey Tuesday last week as it approached but I didn’t bother to read what it was all about. I thought it sounded boring.

So today I read all about it and I downloaded a couple of songs from DJ Danger Mouse’s Grey Album this afternoon. While I strongly believe in the principle of Grey Tuesday, that is to say that copyright law needs reform, I have to say the songs themselves didn’t bake my cake. I guess I’m just not into that indie rap stuff. Anyway I do hope the attention that the Grey Album is getting will bring about some common-sense changes to copyright law.

For those of you unfamiliar with the situation, let me catch you up to speed.

DJ Danger Mouse has taken audio tracks from Rapper Jay-Z’s Black Album and remixed them with music from the Beatles White Album. The new album is cleverly titled The Grey Album.

Enter EMI and copyright lawyers. They claimed that he had not asked permission or paid for the rights to use The Beatles music and demanded that he stop selling his record. The DJ agreed to comply with the order and is no longer distributing the record, which was allegedly only intended for the ears of friends.

But the story doesn’t end there. In issuing the order, EMI has unwittingly thrust The Grey Album into the public spotlight, prompting guerilla music lovers to post MP3s on their websites and blogs specifically on, but not limited to, Tuesday February 24th. Considering that only 3,000 copies of The Gray Album were pressed and the fact that it has been banned pretty much guarantees a Holy Grail status among hip-hop fans and serious music collectors alike.

In protest of EMI’s action approximately 170 sites hosted a full copy of the Grey Album on Tuesday, in spite of the fact that many of those sites had received cease and desist letters from EMI’s lawyers.

So how successful did Grey Tuesday turn out to be?

“After a survey of the sites that hosted files during Grey Tuesday, and an analysis of filesharing activity on that day, we can confidently report that the Grey Album was the number one album in the US on February 24 by a large margin. Danger Mouse moved more “units” than Norah Jones and Kanye West, with well over 100,000 copies downloaded. That’s more than 1 million digital tracks.”

A couple have people have written the same basic message:

Just to let you know the correct lyric [in Stairway to Heaven] is ‘just a spring clean for the maid queen’ not may queen.

Actually folks, it is may queen, but if you looked up the lyrics before emailing me, you’d already know that. What is a maid queen anyway? I bet if I had one my house would be spotless.

Britney Spears might say she’s not that innocent, but some fans of Michael Jackson have put together a song that PROVES he was set-up. Ok it doesn’t really prove anything but a fun game when you are listening to the song is to try and figure out whether this is parody or not.