Two climbers on a Sierra Nevada glacier discovered an ice-encased body believed to be that of an airman whose plane crashed in 1942. 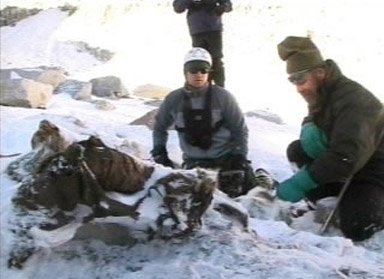 FRESNO, Calif. (AP) — Two climbers on a Sierra Nevada glacier discovered an ice-encased body believed to be that of an airman whose plane crashed in 1942.

Park rangers and specialists camped on the mountainside in freezing weather for an excavation expected to take several days. The body was 80% encased in ice, Picavet said.

“We’re not going to go fast,” she said. “We want to preserve him as much as possible. He’s pretty intact.”

The excavation crew included an expert from a military unit that identifies and recovers personnel who have been missing for decades.

Park officials believe the serviceman may have been part of the crew of an AT-7 navigational training plane that crashed on Nov. 18, 1942. The wreckage and four bodies were found in 1947 by a climber.

Today is the 60th anniversary of the detonation of the atomic bomb on Hiroshima, Japan. I asked my dad what he thought about it and, as expected, he said the Japanese got what they deserved. His main reason for feeling that way is the surprise attack on Pearl Harbor.

When I visited Japan in 1993, I was surprised at the extreme awareness and even fear of nuclear war within the Japanese students that I met. I couldn’t help but feeling that the country was still reeling from its effects. Everyone I met there were all very peaceful people and it was easy to see that many people who weren’t even born at the time of the war had their lives drastically ruined because of the radiation.

Having said that, during my visit to Malaysia I was shocked to learn of the atrocities that the Japanese soldiers of the Second World War committed in countries like Malaysia and China during their campaign across South Eastern Asia. It seems to me that if you are going to say “they deserved it” this is a better reason, but not that I’m saying that. I still think there could have been a better way.

The Atomic Bomb probably did save many of the lives of Allied Soldiers by ending the war and preventing the need for a large scale ground battle. I wonder if repeated bombing campaigns would have done the same thing, it gives one pause to wonder whether or not dropping the bomb was really necessary. It’s clearly a complicated issue, even 60 years after the fact.

Did the ends justify the means? Would the US have done the same thing to Germany if the war wasn’t going as quickly as it did? What about all the civilians that were killed during and after the explosion — was it really necessary? I guess the only thing that can be safely said is that war is a tremendous waste of life.

What is life like for new recruits in the climate of the Iraq War? This article gives a good portrait of those who jump ship and why they do it.

Particularly facinating to me, is the statistics on firing rates. Apparently in World War II only 15 to 20 percent of the combat infantry were willing to fire their weapons this number has steadily increased over the years.

By the Korean War, the firing rate had gone up to 55 percent; in the Vietnam war, it was around 90 to 95 percent. How did the military achieve this? As Grossman writes, “Since World War II, a new era has quietly dawned in modern warfare: an era of psychological warfare — psychological warfare conducted not upon the enemy, but upon one’s own troops. … The triad of methods used to achieve this remarkable increase in killing are desensitization, conditioning, and denial defense mechanisms.”

I have never been put in a situation like the ones a new soldier has to face, but I would hope that if I did have to go to war, it would be a war I could believe in.

I received a forwarded email this morning quoting a blog posting of a letter from a soldier in Iraq.

The gist of what this guy says is that while he is grateful for people “supporting the troops” he is disappointed that they don’t support the war.

My quick response to that is: the people don’t support the war because the reasons used to justify it were lies, it’s a waste of money and people, and it’s not going to make a long term difference.

Of course he supports the war, he’s a gun toting, warmongering soldier who loves kicking ass over there, and he just wishes the American people could understand how fun that is.

In a nationwide CNN/USA Today/Gallup Poll, 3,444 Arabic and Kurdish Iraqis were interviewed face-to-face regarding social and political conditions in Iraq since the war began. The data is raw, but it certainly is interesting.

War Rationale: Version 10.0 – In the year since the invasion of Iraq, the Bush administration has repeatedly shifted its justification for going to war and constantly changed its story on the ‘imminent threat’ of Saddam Hussein, weapons of mass destruction, intelligence, Iraqi connections with al Qaeda, the United Nations, political transition, democracy in Iraq, and the cost to the American taxpayer. We all know (almost) everything about it by now, but if you can hold back the tears long enough to laugh, you might find this account hilarious.

Abu Musab Zarqawi, a Jordanian terrorist who is being blamed for more than 700 killings in Iraq, could have been neutralized long before the war, however the Bush Administration passed on the opportunity three times. Why did the White House’s National Security Council veto Pentagon plans to attack Zarqawi’s Terrorist organization?

“Military officials insist their case for attacking Zarqawi’s operation was airtight, but the administration feared destroying the terrorist camp in Iraq could undercut its case for war against Saddam.”

Because our Calgary trip has been cancelled, Anna-Maria and I took a trip into Medicine Hat instead. We will be heading home to Lethbridge later today. I had the chance to talk to Dad about some current events and I can’t believe his take on “the events of” the last few weeks. (If you don’t like it get a new blog!). He feels that Canada has “gone to far” by not sending Iraqi diplomats home when the United States has put out a press release asking other countries to do so. For what good reason should Canada send them home? There is no reason. The US has no right to ask the world to send them home. Here are some excepts from a related article:

The spokesman displayed little sympathy for the Iraqi diplomats who might be expelled, saying he did not know where they should go but it was possible to return to Iraq by land. “We just think they need to be kicked out of the countries that they’re in,” Boucher said. Asked where they should go, he replied: “I guess, to put it bluntly, that’s their problem.”

The article also stated that Canada hasn’t been specifically asked:

A spokesman for Canadian Prime Minister Jean Chretien told Reuters in Ottawa: “They (the Americans) have not asked us and we see no reason to change Iraq’s diplomatic status in Canada.” Iraq’s embassy in Ottawa has one Iraqi diplomat. Russia also refused the US request to expel Iraqi diplomats from Moscow, dismissing it as “unacceptable”.

In a war that seems more and more like it’s being run by an ambitious dictator, I can only hope it is over soon.

Last night I went to Anna’s roommates birthday party. I was watching the news when the first guests arrived and we learned about a marine (an engineer actually) stationed in Kuwait who threw a live grenade into a tent filled with other Marines. The blast injured about 13 people and killed at least one. Apparently the Marines had had some problems with this guy and were planning on leaving him in Kuwait when it was time to move into Iraq. What a crazy world we live in.

Another interesting article I read this morning explains that many Iraqies would rather kill their own officers than fight the US.

It looks like my trip to Calgary has been cancelled because Anna is not going down to the States with her parents after all. I’m going to work on my animation instead.

It’s Oscar night and I’m sure Anna-Maria and I will be tuning in. Steve Martin is hosting and I read an article about where he’s getting his jokes from, which I thought was interesting.

So with the nominees list open in my other window here are my predictions: