I just got back from my trip to Calgary and the Kid’s Hope Ethiopia Triathlon.

I didn’t swim nearly as fast as I had hoped but I’ll choose to blame it on the fact that I couldn’t get very good rotation on my arms while wearing my wet-suit. Every stroke meant pulling against the elastic fabric of the neoprene and I’m sure the lack of training never had anything to do with my inability to keep my time under 10 minutes. 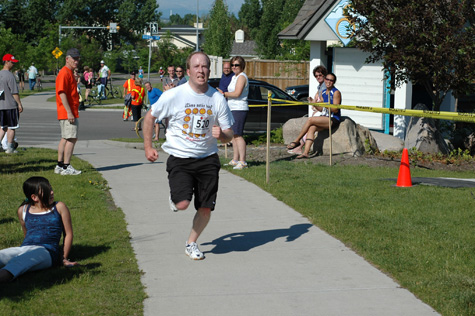 Nevertheless our team did very well—especially against the other teams—not so much against the individual tri-athletes many who amazingly swam, biked, and ran faster than the three of us working together.

The race was put on by Kids’ Hope Ethiopia, the same charity organization that Bryce happens to work as a Project Coordinator.

So against other teams, we came in 8th out of 21 and my individual swim ranked me 4th. I think the highlight for me was seeing my team-mate Bryce making his crazy sprint to the finish line and then paying the price after the race. It’s not hard to love a competitive team-mate.

I can almost see myself getting into doing the whole thing myself, but then again, it’s a lot easier said than done, especially from the comfort of my office chair.

I’m away today taking part swimming in a team triathlon held in Okotoks (is it safe to call Okotoks a suburb of Calgary yet?) for the annual Foothills Charity Triathlon for Kid’s Hope Ethiopia.

I’m happy enough to just have one section of the triathlon, because I want to go all out, but I have to keep in mind that I’ve spent exactly no time at all training for this event.

I’m just shooting to break seven and a half minutes which looks to be a fairly competitive time (and a winning time depending on which year’s results you are looking at).

The other day a friend asked if I would take part in the Foothills Charity Triathlon for Kid’s Hope Ethiopia. It’s actually a “mixed” triathlon in that, the three segments of the race are done by different people, so I’ll only be doing the 500m swimming section in Crystal Shores Lake (Okotoks, Alberta).

I’m really looking forward to it. I’ve never been much a distance swimmer, and though 500m isn’t exactly FAR (by most swimmers’ standards), it’s slightly out of reach for me to sprint the whole way though it wouldn’t surprise my former swim teammates if I tried.

Wish me luck, and if you’re in the Calgary/Okotoks area, come and cheer for my team! The race happens Saturday, July 5th, 2008 starting at Crystal Shores Lake at 8:00am.