Mordechai Vanunu was released from prison earlier today, but will have to live under some very restraining rules. The leader of the Israeli Opposition Party and founder of Israel’s nuclear weapons program Shimon Peres says the heavy restrictions imposed upon Vanunu are justified.

As I mentioned in an earlier post Mordechai Vanunu betrayed his country, Israel, by telling the world about its atomic weapons program. Vanunu is not allowed to speak with the media, he is not allowed to release any information about Israel’s weapon’s programs including information that has already been leaked. He must give 24 hours notice if he wishes to sleep at a different address and he is not allowed to communicate in Internet chatrooms unless specific permission is given. He is not allowed to speak to “foreigners”, he has no Israeli passport and Israel’s intention is to keep him within their borders preventing him from speaking to anyone about their secrets. Other restrictions will be applied if the government feels he is not cooperating. 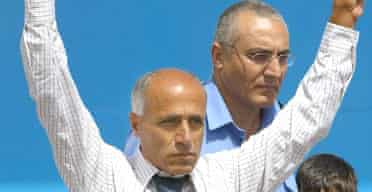 After 18 years of prison, nearly 12 of which were in solitary confinement, I hope he’s learned that the government means business. It’s in his own best interest to go along with the rules that have been setup for him, and just try to start living his life. Given the picture of him here, flashing victory signs, I think he has other plans in mind.

Supporters of Vanunu have put up a special website on his behalf. Meanwhile news organizations like The Moscow Times, Jerusalem Post, and many more are running stories about his release and speculating on what he might do next.