Would you settle for an island that sort of looks like a part of a continent? Well now you can – assuming you have several million to buy it. 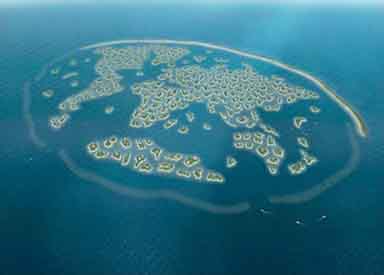 It’s a collection of (soon to be) man-made islands designed to look like the world. Construction has begun on the $1.8 billion(US) project that is scheduled to be completed late 2005.

The World will consist of between 250 to 300 smaller private artificial islands divided into four categories – private homes, estate homes, dream resorts, and community islands. Each island will range from 250,000 to 900,000 square feet in size, with 50 to 100 metres of water between each island. The development is to cover an area of 9 kilometers in length and 6 kilometers in width, surrounded by an oval shaped breakwater. The only means of transportation between the islands will be by marine transport.

Here is a report from The Emirates Network. While you’re there, check out their interesting promotional video.

Not everyone is happy with the islands, with complaints about harm to the ocean’s natural eco-system and eroding shorelines due to current changes.

Soccer players David Beckham and Michael Owen don’t seem to be worried about it, because apparently they each bought apartments in one of the archipelagos. It’s also been reported that singer Rod Stewart bought the island designed to represent Britain. (link to divernet.com article)