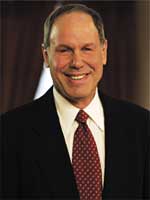 The New York Times is running a story on the departure of Disney CEO Michael Eisner from the company. His last day will be on Saturday.

It is a low-key way to end a 21-year career that was both brilliant and controversial and during which Mr. Eisner, 63, became the face of Disney for the generation whose parents grew up with the founder, Walt Disney.

It's about bloody time.

Of all the people not to get into a PLANE CRASH! I'm sure Pixar will be staying now:)

I don't know about that t.

I think Eisner's replacement, Bob Iger, will have his work cut out for him because I still think Disney doesn't want to pay Pixar the money they deserve.

I also don't think Pixar will be in that bad of shape without Disney's logo prefixing their products, and finding a new distributor will be, relatively speaking, pretty easy.

It will be interesting to see what happens.