In the 1951 movie, “Distant Drums” a stock sound effect now known as the Wilhelm scream was first used. It has since been featured in dozens of movies. It is one of the most well-known cinematic sound clichés.

The Wilhelm’s revival came from Star Wars-series sound designer Ben Burtt, who tracked down the original recording (which he found as a studio reel labeled “Man being eaten by alligator“). He named it after Wilhelm, a minor character who emitted the scream in the 1953 movie The Charge at Feather River. Its use in Star Wars was the beginning of something of an in-joke amongst some sound designers of the film industry, especially at Skywalker Sound. They continue to try to incorporate it into movies wherever feasible; action movies are naturals, but film sound cognoscenti are particularly impressed when it is used naturally in films such as A Star Is Born (with Judy Garland) and A Goofy Movie. In a tribute to its origins, the clip was used in the film Indiana Jones and the Temple of Doom when the villain Mola Ram was, in fact, eaten by alligators.

Some people, once aware of it, recognize it immediately. Some feel that it distracts the viewer and interrupts the flow of the film. 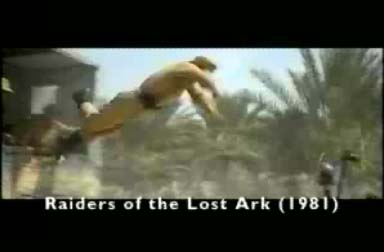 There are many movies featured in this compilation that incorporate the wilhelm scream, for example Star Wars, Indiana Jones, Howard the Duck, The Goofy Movie, and Batman just to name a few. After having watched the clip I’m sure it’s going to stick out everytime I watch another movie where it is used.