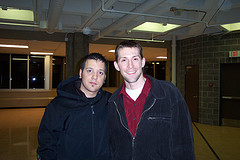 Being a part of the studio audience was a lot of fun. George is one of those rare people whose great TV personality is totally real. He is almost exactly the same one-on-one as he is in front of the nation.

I also enjoyed meeting some of the producers and even the director of Newsworld. The Hour is a great program, one that I never realized was as good as I’ve heard it to be. I’ll be watching more often in the future.