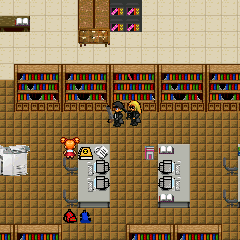 I just finished reading an interesting pieceÂ on watercoolergames.org about the Super Columbine Massacre RPG, a video game in which you take the role of Eric Harris and Dylan Klebold, the Columbine killers, on that fateful day in the Denver suburb of Littleton. How many people they kill is ultimately up to the player.

Judging from some of the harsh comments and some of the news articles written about the game from journalists that never even bothered to play the game it seems to me that a lot of people can’t comprehend the possibility that a video game could be a potential medium for provoking thought or education. Not that playing the game is a particularly enjoyable endeavour, but as compared with the documentary, the movie, or the multiple number of books written on the subject, why is it assumed that “the game” would automatically be something that condones their behavior whereas these other mediums get a pass?

One commenter had the nerve to go so far as to say,

“If your purpose in this game is to ‘understand’, my question is why do we need to understand? Understanding evil is not important—knowledge is not power. Evil is present and does great harm in our world. A better choice is to empower through ministry that heals. It’s my thought that your game doesn’t minister or provoke healing discussion—rather, it fuels the negative impact, divides people from Truth rather than lead them toward it.”

To me, a comment like this is so out-of-touch that it’s shocking. I can understand that at first appearance the idea of making that fateful day’s events into a game may seem trivilizing, but after having taken a few minutes to try it myself, I can say it allows for an interesting perspective that isn’t exactly possible in other forms.

If you’re not convinced, then I recommend checking out the fascinating interview about the game with a Columbine survivorÂ and another one with the game’s creatorÂ which, after reading, may cause you to adjust your preconceived notions about the game.