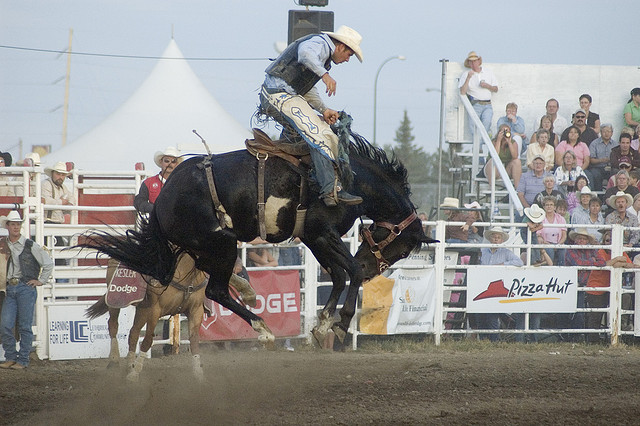 This last week has been Whoop-Up Days in Lethbridge, which is to say the Rodeo has been on at the Stampede and Exhibition Park and though I’ve lived here for almost 4 years, this was the first time I’ve been to the Lethbridge Rodeo. I took a bunch of photos that even though I know will probably never win any awards, they do give a pleasant taste of what the rodeo is all about.

The rodeo I remember as a kid was not nearly as entertaining as my experience on Friday and Saturday night. I remember sitting through extremely long breaks where it seemed that nothing was happening followed by short bursts of entertainment which if you were not careful, you might miss completely because hey what’s going on UNDERNEATH the stands? Needless to say I was always looking for entertainment. The other thing I remember about the rodeo as a kid was that there were a lot of cowboys smoking cigarettes and drinking beer—which coming from a non-smoking, non-drinking, somewhat religious family—made me extremely uncomfortable. The other thing I didn’t like about the rodeo as a kid was that we always sat so far away from the action. It was hard to see what was really happening. That all changed this weekend. Well the drinking and smoking didn’t, but I came to realize that the breaks are actually not that long and this time I didn’t waste my time with all the suckers up in the stands, I got down right beside the field because my plan was to get some really nice photos. I was a little nervous just heading down there, because I didn’t know if you needed special permission or what? Well, I guess people just saw my camera and assumed I was a seasoned photographer and obviously was supposed to be there taking photos. It turns out that’s all it takes. I had such a good time at the Rodeo on Friday night, that when my brother arrived in Lethbridge on Saturday, I talked him in to going with me for another night of photography fun. He’s got a lens that lets in more light and therefore is able to take photos later into the evening after the sun has gone down and he actually is a seasoned photographer. He gave me lots of good tips. Anyway, Gary and I, each had our cameras out, shooting next to the Global TV camera man when we met a friendly guy from the Canadian reserves. He asked if we would mind taking a few shots of their mascot for him, since we had fancier cameras, and then just emailing him. We agreed and he gave us his card. Well a little while later someone official looking came up to us and asked us if we had press passes. The old “carry a fancy camera and get into restricted areas” trick had used up all its juice.

But as we were getting told that if we didn’t have press passes then we would have to leave, I whipped out the business card I had just been given and explained that this guy asked us to shoot photos for him. What a stroke of luck because the guy knew who we were talking about and all of a sudden it was fine for us to be there. We were rodeo photographers again!

But the fanciest camera and all the permission in the world won’t necessarily help one to remember to set his white balance properly. I can’t believe I shot the whole night with my white balance set for fluorescent lights. Luckily Photoshop is helpful at fixing such issues. We had a lot of fun at the rodeo and Gary, as expected, got some really great rodeo photos (which he hasn’t uploaded yet).

You can check out the rest of my rodeo photos in my flickr set: Whoop-Up Days 2006.