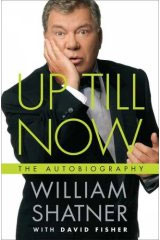 I’ve grown out of my teenage fandom for all things Trek, but I found these excerpts from William Shatner’s new autobiography, Up Till Now, very interesting. They encompass a range of experiences from his time on Star Trek, where he confesses being the colossal jerk of legend, to his poignant recollections of the death of his third wife.

Within a few days of Nerine’s death I learned the National Enquirer was going to run a story asking, basically: “Did he or didn’t he kill her?”

I wanted to get the true story out as quickly as possible.

We called the Enquirer and offered them a deal: “Don’t run that story. Instead, we’ll give you the exclusive story of what happened that night.”

In exchange, they contributed $250,000 (£123,000) to what would become the Nerine Shatner Foundation, which helps addicted women.

I guess the question asked most often was why did I call 911 before diving into the pool to try to save her?
It took me years to fully understand, and even then it was only because of my fourth wife, Elizabeth.
Every year on August 9, Elizabeth and I would go up to the pool in the evening. The moon is in the same position, the lights are the same.

On one of those nights I suddenly knew. The water in the pool had been still.

And somehow I had known that whether I dived in and rescued the body and then called 911, or called 911 and then did so, it would have made no difference.

Honestly, I always assumed he killed her, but now I’m not so sure. Either way, I find this kind of bear-all openness, from a legend such as Shatner, riveting.