From the 2nd grade reader, “More Friends and Neighbours” comes a classic tale of a husband biting off more than he could chew. He learns an important lesson along the way.

I’m not sure where the book came from, but I’ve been reading it to my kids lately. I enjoy reading the old fashioned style as well the gender norms of a bygone era are also interesting. I remember my mom (or possibly grandma) used to tell me this same story at bedtime. Enjoy: 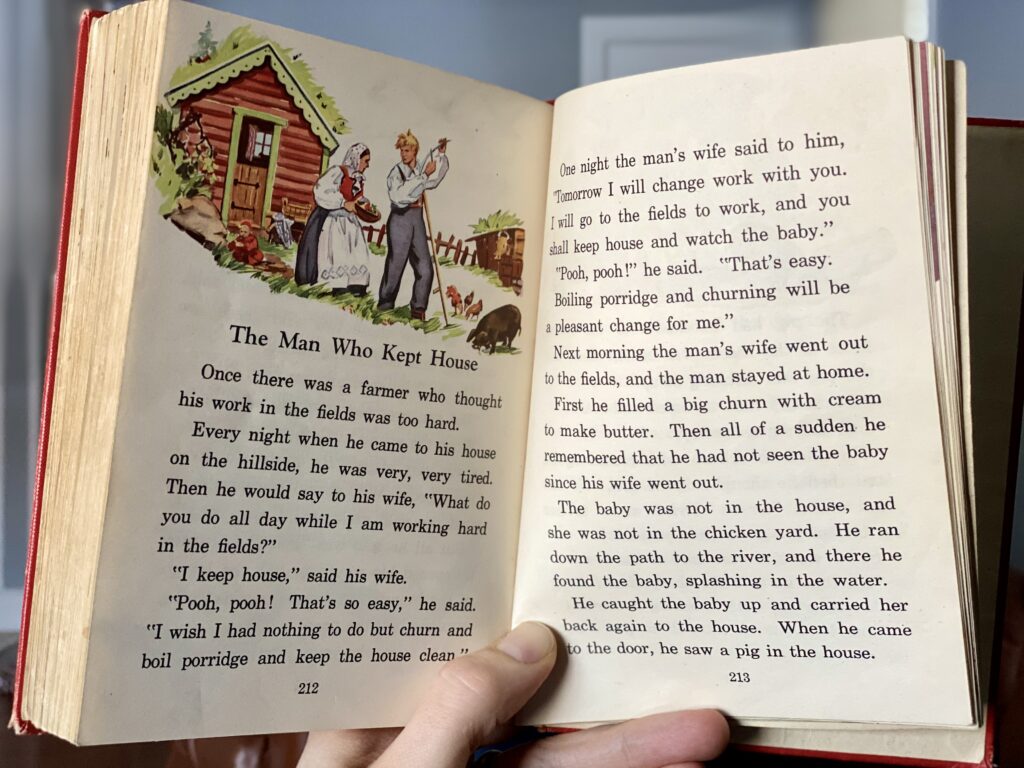 Once there was a farmer who thought his work in the fields was too hard.

Every night when he came to his house on the hillside, he was very, very tired. Then he would say to his wife, “What do you do all day while I am working hard in the fields?”

“I keep house,” said his wife.

“Pooh, pooh! That’s so easy,” he said. “I wish I had nothing to do but churn and boil porridge and keep the house clean.”

One night the man’s wife said to him, “Tomorrow I will change work with you. I will go to the fields to work, and you shall keep house and watch the baby.”

“Pooh, pooh!” he said. “That’s easy. Boiling porridge and churning will be a pleasant change for me.”

Next morning the man’s wife went out to the fields, and the man stayed at home.

First he filled a big churn with cream to make butter. Then all of a sudden he remembered that he had not seen the baby since his wife went out.

The baby was not in the house, and she was not in the chicken yard. He ran down the path to the river, and there he found the baby, splashing in the water.

He caught the baby up and carried her back again to the house. When he came to the door, he saw a pig in the house. 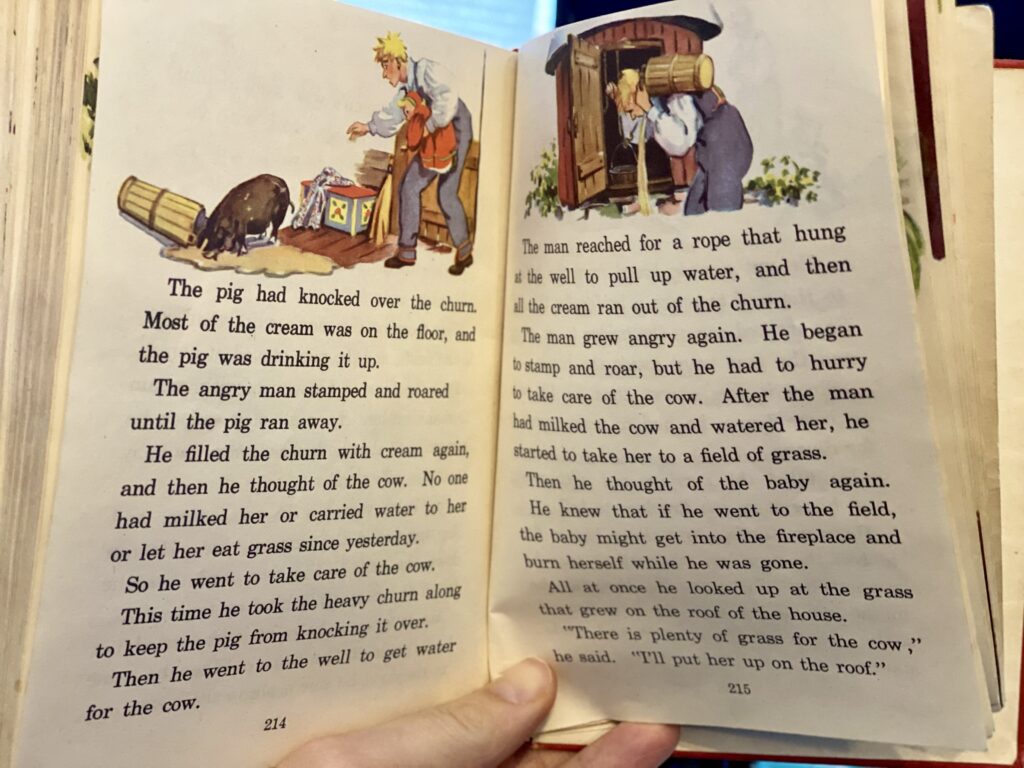 The pig had knocked over the churn. Most of the cream was on the floor, and the pig was drinking it up.

The angry man stamped and roared until the pig ran away.

He filled the churn with cream again, and then he thought of the cow. No one had milked her or carried water to her or let her eat grass since yesterday.

So he went to take care of he cow.

This time he took the heavy churn along to keep the pig from knocking it over.

Then he went to the well to get water for the cow.

The man reached for a rope that hung at the well to pull up water, and then all the cream ran out of the churn.

The man grew angry again. He began to stamp and roar, but he had to hurry to take care of the cow. After the man had milked the cow and watered her, he started to take her to a field of grass.

Then he thought of the baby again. He knew that if he went to the field, the baby might get into the fireplace and burn herself while he was gone.

All at once he looked up at the grass that grew on the roof of the house. 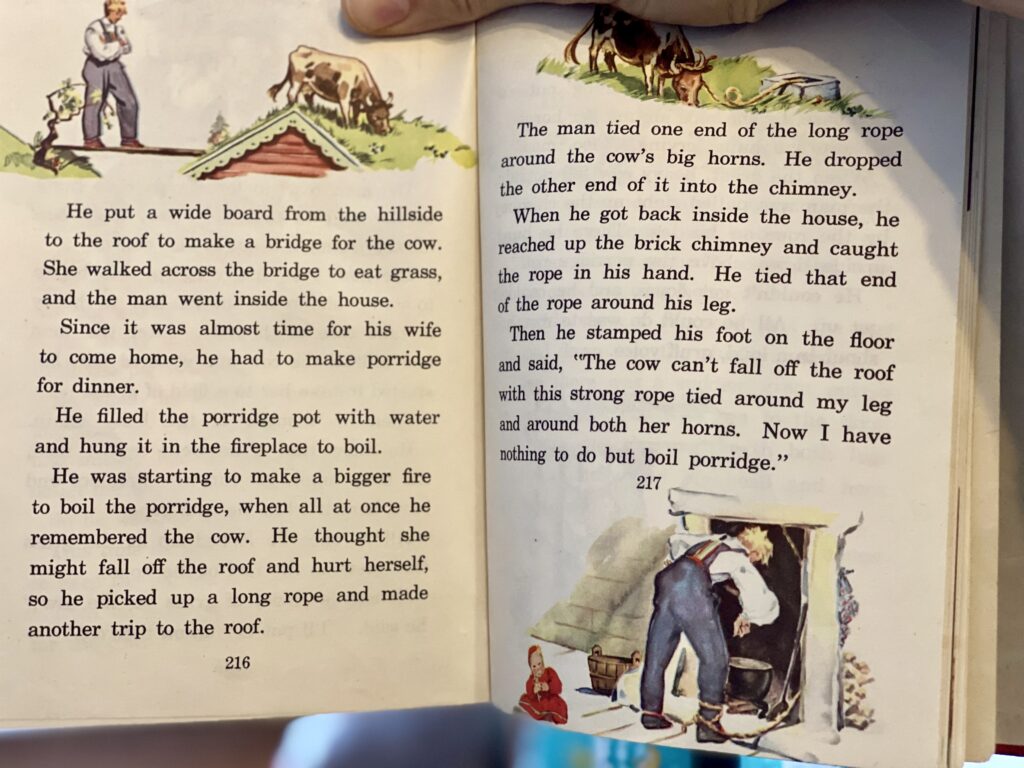 He put a wide board from the hillside to the roof to make a bridge for the cow. She walked across the bridge to eat grass, and the man went inside the house.

Since it was almost time for his wife to come home, he had to make porridge for dinner.

He filled the porridge pot with water and hung it in the fireplace to boil.

He was starting to make a bigger fire to boil the porridge, when all at once he remembered the cow. He thought she might fall off the roof and hurt herself, so he picked up a long rope and made another trip to the roof.

The man tied one end of the long rope around the cow’s big horns. He dropped the other end of it into the chimney.

When he got back inside the house, he reached up the brick chimney and caught the rope in his hand. He tied that end of the rope around his leg.

Then he stamped his foot on the floor and said, “The cow can’t fall off the roof with this strong rope tied around my leg and around both her horns. Now I have nothing to do but boil porridge.” 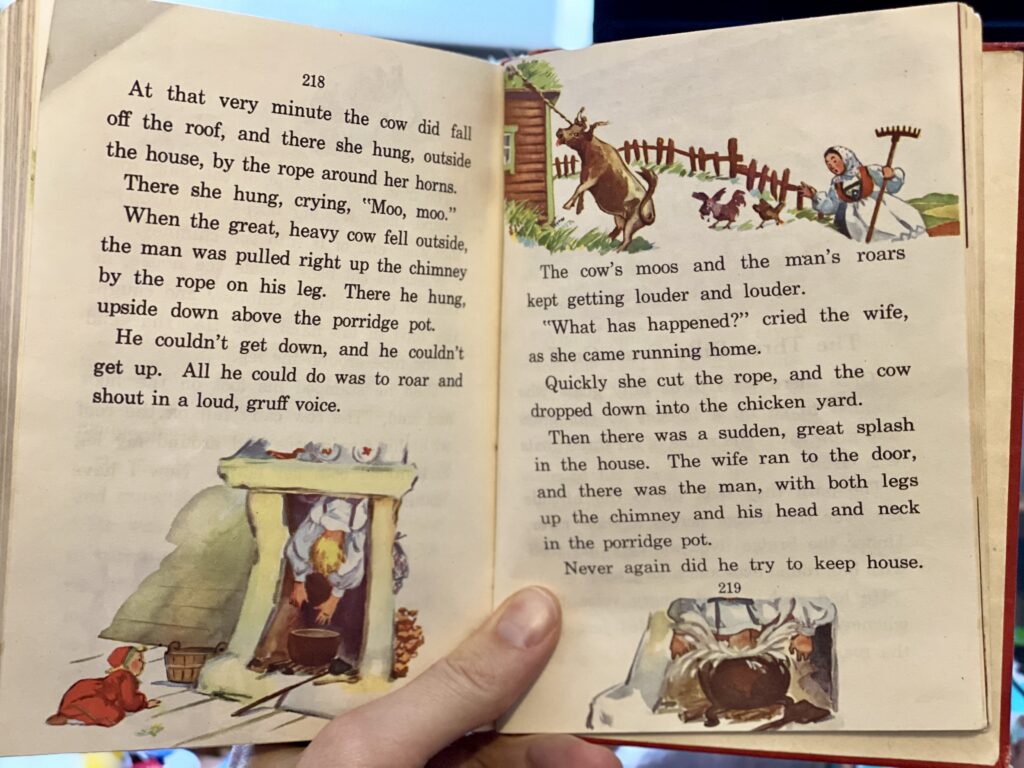 At that very minute the cow did fall off the roof, and there she hung, outside the house, by the rope around her horns.

When the great, heavy cow fell outside, the man was pulled right up the chimney by the rope on his leg. There he hung upside down above the porridge pot.

The cow’s moos and the man’s roars kept getting louder and louder.

“What has happened?” cried the wife, as she came running home.

Quickly she cut the rope, and the cow dropped down in the the chicken yard.

Then there was a sudden great splash in the house. The wife ran to the door, and there was the man, with both legs up the chimney and his head and neck in the porridge pot.

Never again did he try to keep house.