The dreaded unstoppable covid arrived in my family over the weekend (probably) and was confirmed for each of us today in positive test after test. Andrea lucked out and hers came back negative but for the rest of us, it’s COVID-19!

The youngest of the family has taken the worst of it. He didn’t sleep much last night and what little shut-eye he got, he did it in our bed breathing directly into my face.

Although I haven’t been terribly ill, I could tell I wasn’t well enough to go to school so I took a medical day and I’m glad I did. Now it turns out I’ll be home for the rest of the week (5 days for fully vaccinated Canadians) while my son and daughter are each expected to quarantine for a full 14 days because of their unvaccinated status.

The testing was not popular in our house.

“You hurt me Mom!” accused Ian, the two year old, after having the probe sent up his nose. His sister (13 months older) screamed and twisted as I held her down so we could get a sample. Ian tried to assure her — now emboldened by his status as one done testing — but it had the opposite effect, “It’s hurts a little bit. It’s a little bit.” (O.M.G. that kid is cute). She revved up the squirming to full kicking.

Anyway, as the test stripes started to appear Andrea didn’t need the full 15 minutes to declare my positive result. In the end the stripe was faint but Ian’s was darker purple than the control. 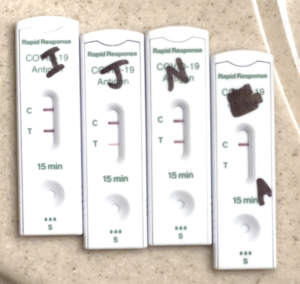 As I’m about to wrap this up, Andrea mentions to me that she thinks she feels a sore throat developing. It’s going to get us all eventually.