After checking into the Motel 6, we wandered around looking for some place to eat. I’d never been there before but I did enjoy the kitschy decor of Bubba Gump’s and even took home a souvenir glass.

We did a sneak peak at the gate to the park that evening. We were just so close and I couldn’t wait. The kids got a sticker from a nice lady at security which they proudly stuck to their coats. 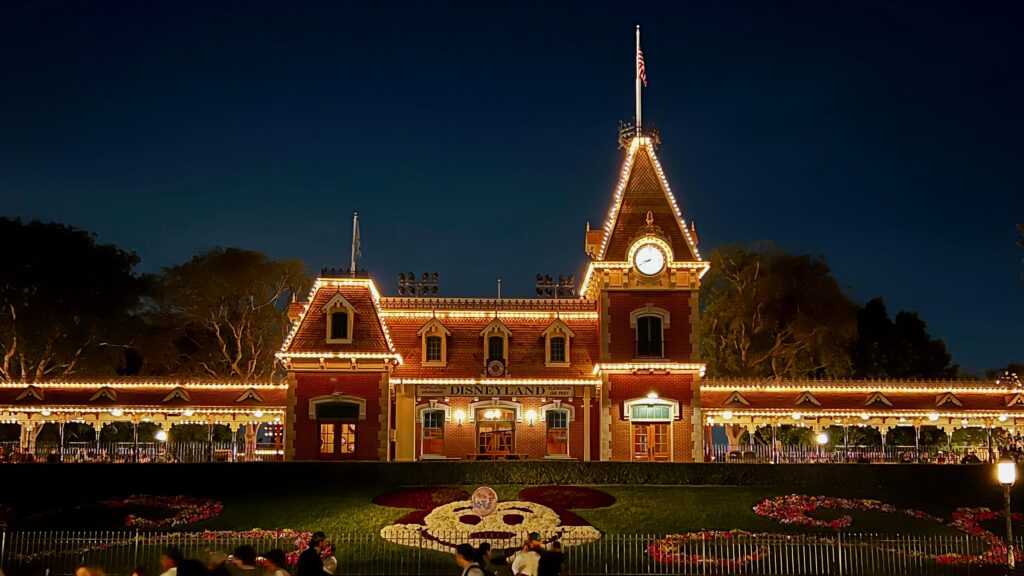 Tuesday morning finally arrived. We started out enthusiastically but not quite early enough to make it to the rope drop, nevertheless still the earliest I’d ever left for the park. After trekking a few Anaheim sized blocks a kind stranger asked us if we were going to Disneyland.

The smiles on our faces melted as he let us know that wagons are not allowed in the park. He explained that earlier that morning he arrived with a wagon himself and was turned back. He was refused a second time as they told him lawn chairs are also verboten in the House of Mouse. We thanked him and I told Andrea to forge ahead without me while I ran the wagon back to the hotel.

Ok, 8:35 with our Disney™ stroller rented, in the park and anxious to get going to our first ride… I reluctantly insisted we get in line for a photo in front of the famous Mickey Mouse planter. It was hard putting everyone through it but I knew it was now or never. The line moved faster than expected and now we have some pretty great shots in front of the iconic entrance. 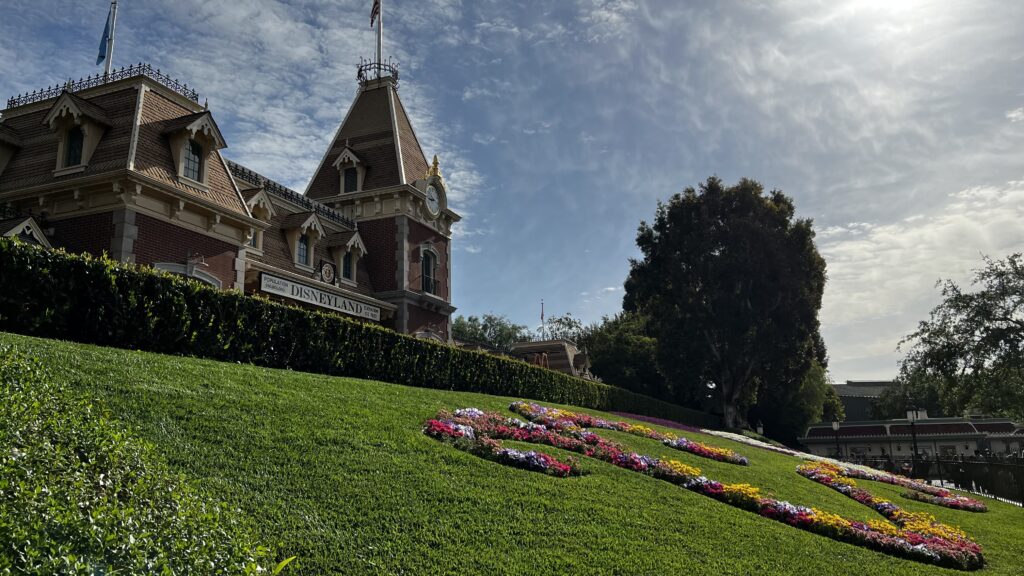 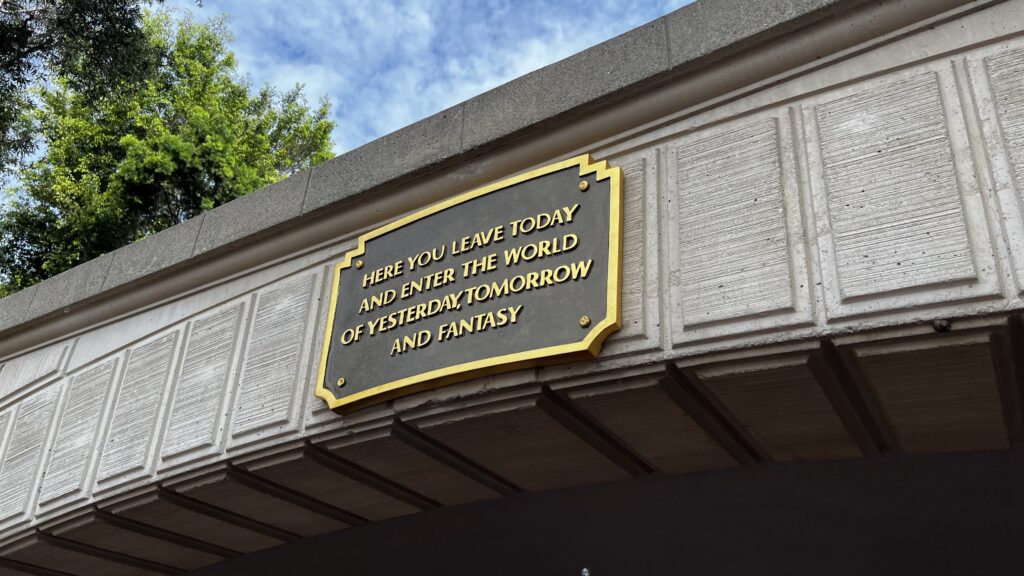 Walking into the actual park, seeing the castle at the end of the road, our magical journey had begun. We stopped into one of the shops where Ian and Nesslin were gifted a “1st Visit!” button. 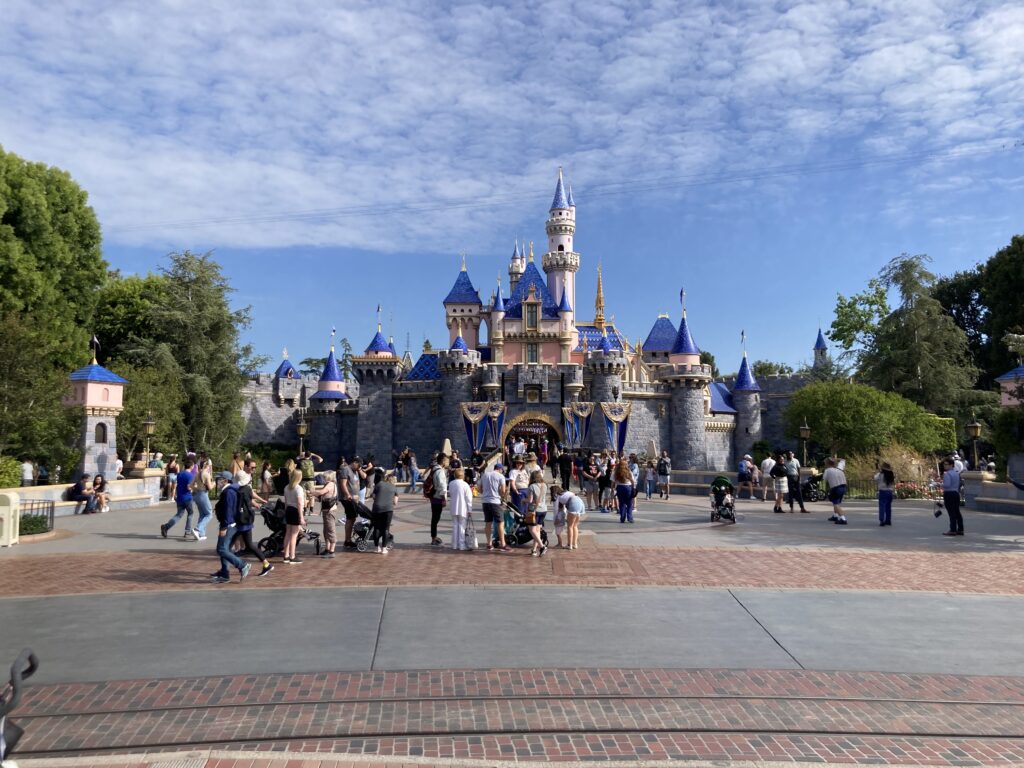 A few more photos in front of the castle and we were finally going on our first ride — King Arthur’s Carousel. A mere five minute wait, we could tell this was going to be a great day.

Next, we saw the elephants at the Dumbo ride and well, it was time to bite the bullet and get in a real line. The sign said 20 minutes. The truth was double that. And, while Nesslin would later report the elephant ride to be her favourite of the day, I couldn’t help but think a 40 minute wait for a ride lasting a minute and a half to be excessive. I needed to figure out the lightning line business on the app that I had so begrudgingly paid extra for. 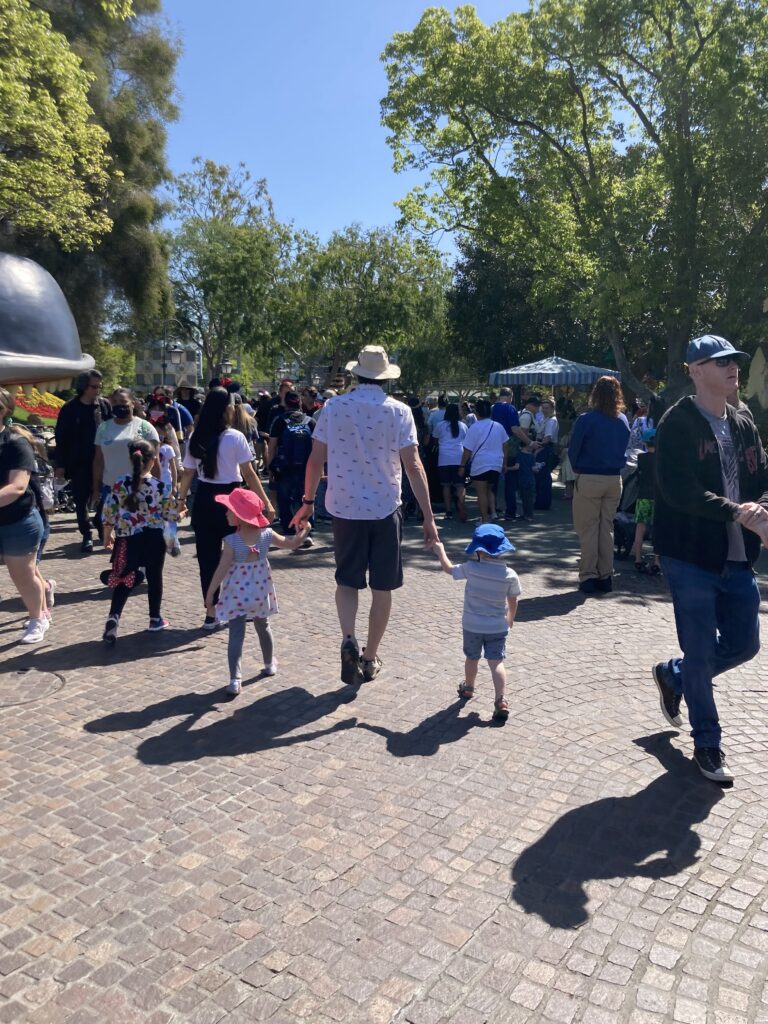 I figured it out and reserved Lightning Passes for Splash Mountain. It would be available in another couple hours but in the meantime we hit up Tom Sawyer’s Island — a favourite of mine from when I was a kid. The caves are still extremely fun to explore.

When we still had time before Splash Mountain, we tried out what would be Ian’s favourite ride of the day, The Many Adventures of Winnie the Pooh. His favorite part of the ride seems to be the wide doors that open up in front of the ride car as things get started.

Riding Splash Mountain without Ian meant the family would be splitting up for an attraction. I explained to the cast member at the Lightning Line kiosk that I didn’t really know what I was doing. He showed me where to scan and after the light turned green I asked, is that it? That’s it! We rushed to the front and spent a few minutes in what could have otherwise been an hour-long wait.

Now, the thing is, I had reserved three lightning lane passes for Splash Mountain but I had used just one . They didn’t ask me to scan for Nesslin — and Andrea and Ian weren’t lined up but were standing outside the fenced area. I thought we were pulling a fast one but I guess it’s because we were doing a parent swap that we only had to scan one ticket. I didn’t even know that’s what was happening. It’s a policy at Disneyland that parents with little ones can go to the front of the line while the other parent takes care of the baby/toddler too small to ride and then they switch. So when we were done, Nesslin immediately went back into the Lightning Lane with Andrea, and I took Ian for his third spin around The Many Adventures of Winnie-the-Pooh. He couldn’t get enough of those cool doors.

Another surprise highlight, was meeting Winnie-the-Pooh, Rabbit (and half meeting Tigger as he walked by us during a character switch). It was a good 25 minute wait but as soon as we were done the kids asked if we could get back in line and do it again. Really. 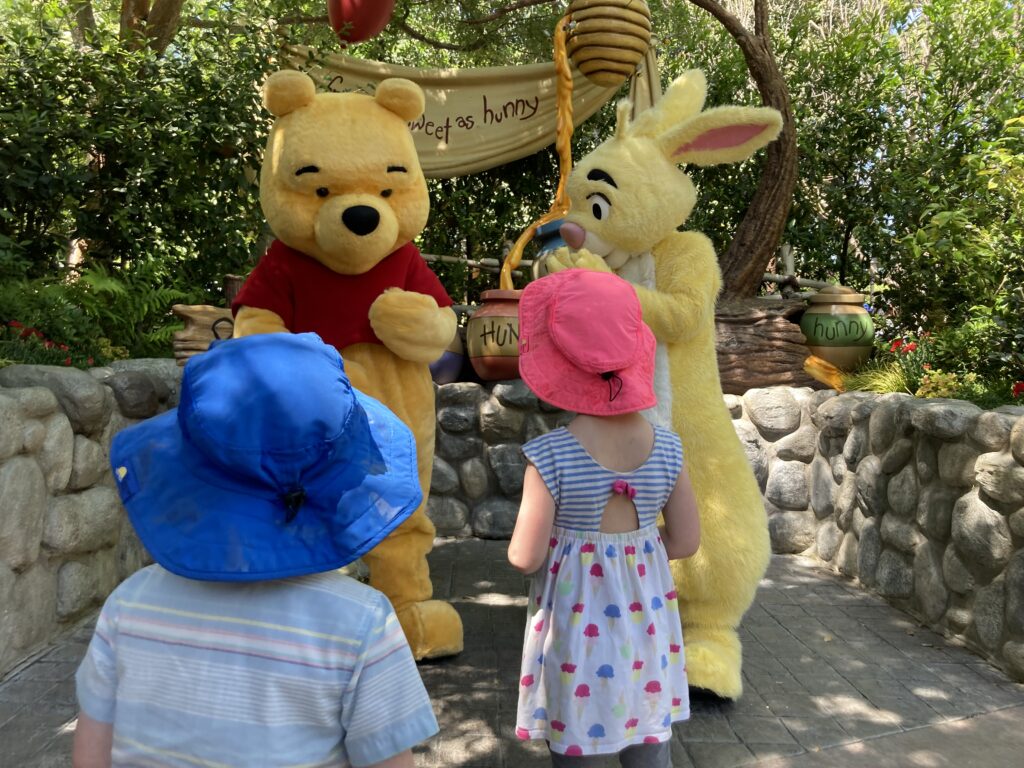 I explained that we had many things to see and do and was able to whisk them away to the next thing: Dinner at the Hungry Bear Restaurant. As a kid we never ate park food — much too expensive. As an adult I just wanted to make things easier and well, I wouldn’t describe the process as easy or particularly special but ultimately I felt it was worth it and I would do it again. At least I figured out how to order food in advance on the app. However, it wasn’t until a week after we were back that I read on Reddit about someone spotting rat droppings in the kitchen around the same time we were there. Remy, no doubt. (Our food was fine.)

Next, it was time to visit the old west and ride the Thunder Mountain Railroad. Once again we did the parent swap but this time Ian was inconsolable. He didn’t understand why he was being denied the e-ticket ride experience just because he happened to be an inch too short. 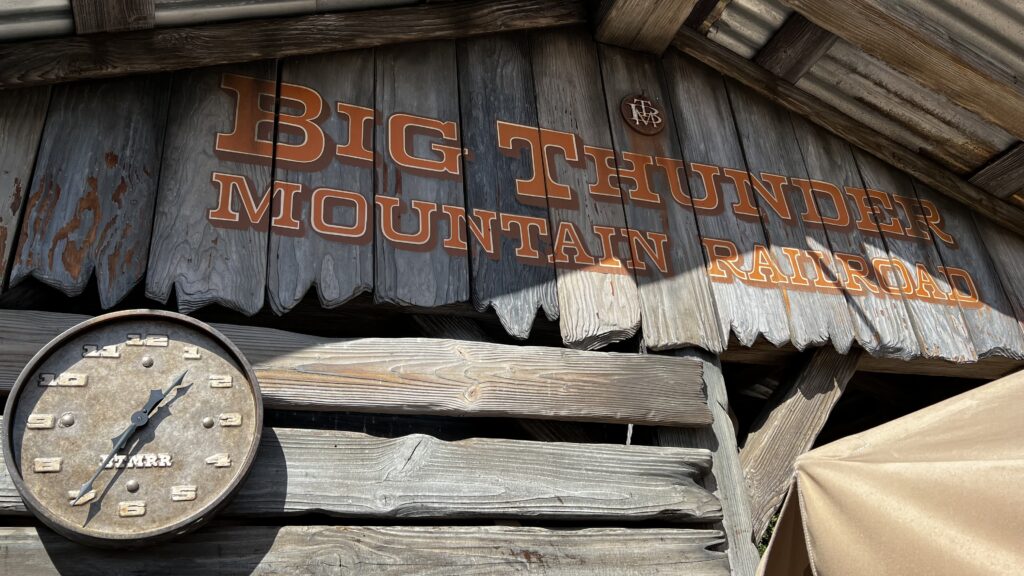 While Andrea took Nesslin I told Ian I would get him an ice cream treat. The choices of ice cream treats at the street vendor didn’t include cones so I whisked him off to Main Street U.S.A. to try at the ice cream parlour. Well, talk about long lines — I don’t know how fast that line was actually moving but I figured it would take at least an hour to get through. Trying to explain this to a tired, hungry two year old while still worrying about getting back on time to meet with Andrea and Nesslin… it was a lot. Anyway, as we were standing outside the Gibson Girl Ice Cream Parlour, we noticed the normally crowded street being cleared in preparation for a short parade. I parked Ian in his stroller and seeing Olaf, Elsa, and Anna “in the flesh” revived Ian’s spirits and is something he’s still excitedly talking about weeks later. We went back to Thunder Mountain Railroad where he settled for a Mickey Mouse shaped dilly bar with no complaints.

We made a pit stop in Galaxy’s Edge for some photos in front of the Millenium Falcon before our next Lightning Lane stop. 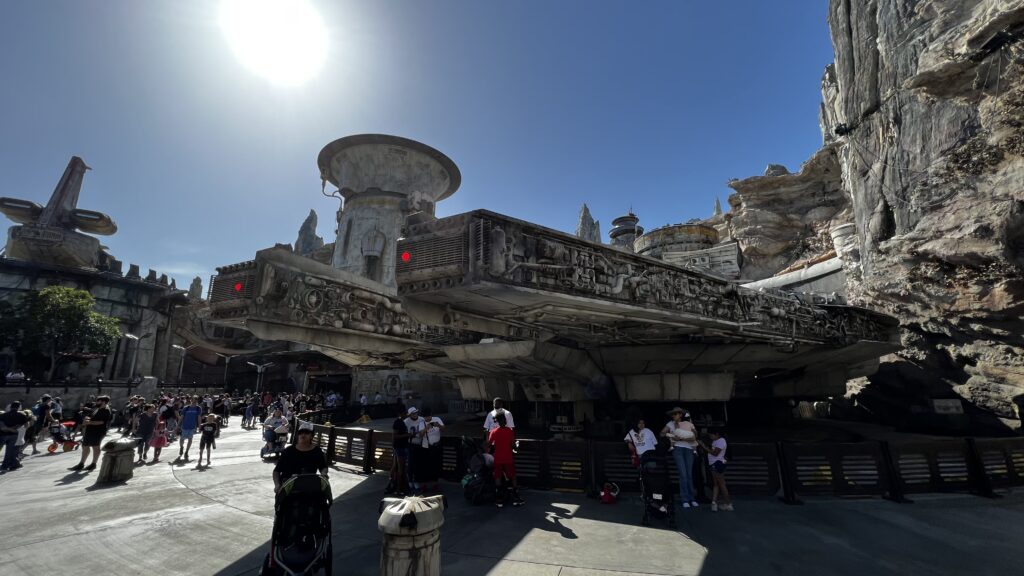 The surprise of the day was Nesslin’s reluctance to want to ride The Matterhorn. We have watched the rollercoaster zip through the dark tunnels of the Matterhorn dozens of times on YouTube and reenacted running around the house away from the mythical beast but one thing I didn’t count on was that Nesslin was actually terrified of the meeting the real Abominable Snowman. The last thing she wanted to do was trespass in his home. I persuaded her to give it a shot and soon enough we were flinging about the dark tunnels which she loved. And even though she never complained once we were on the ride, to be fair, it would have been scary for any three year old — bumpy, dark, and extremely loud. 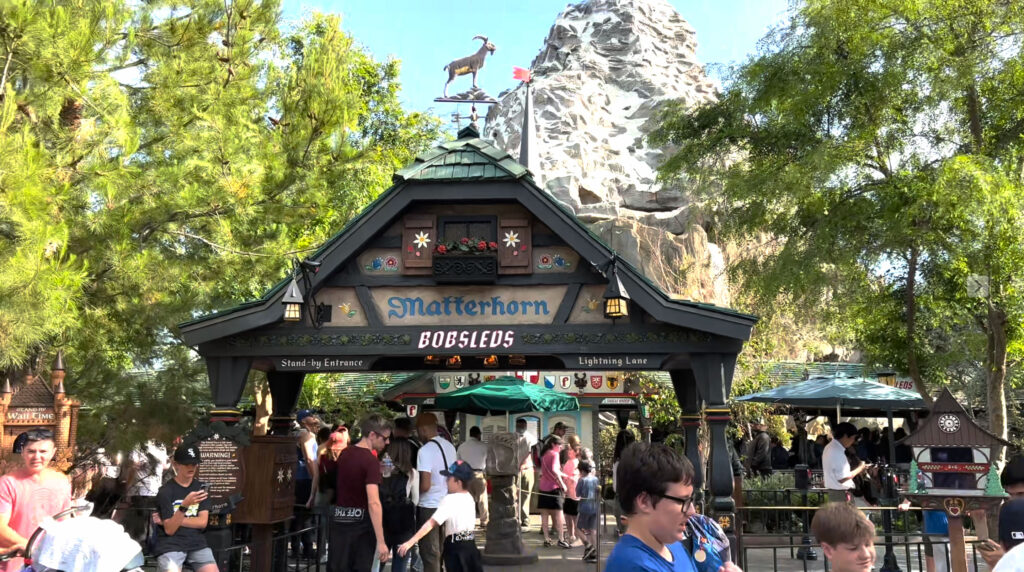 After a quick snack for supper, it was becoming clear the day was winding down. We needed to make it to California Adventure before it was too late. I meandered over to see the flagpole plaque near the entrance while Andrea took a bathroom break. I wanted to see the location of Walt’s famous opening day speech where my Grandpa’s first cousin, Goodwin Knight, also spoke on that day dedicating the flagpole. As we strolled, a fanatical mob came storming around the circular flagpole enclosure excitedly lining up for something. I figured, why not, and jumped in line. It was a line for photos with Minnie Mouse, so we got some photos and didn’t have to wait long. 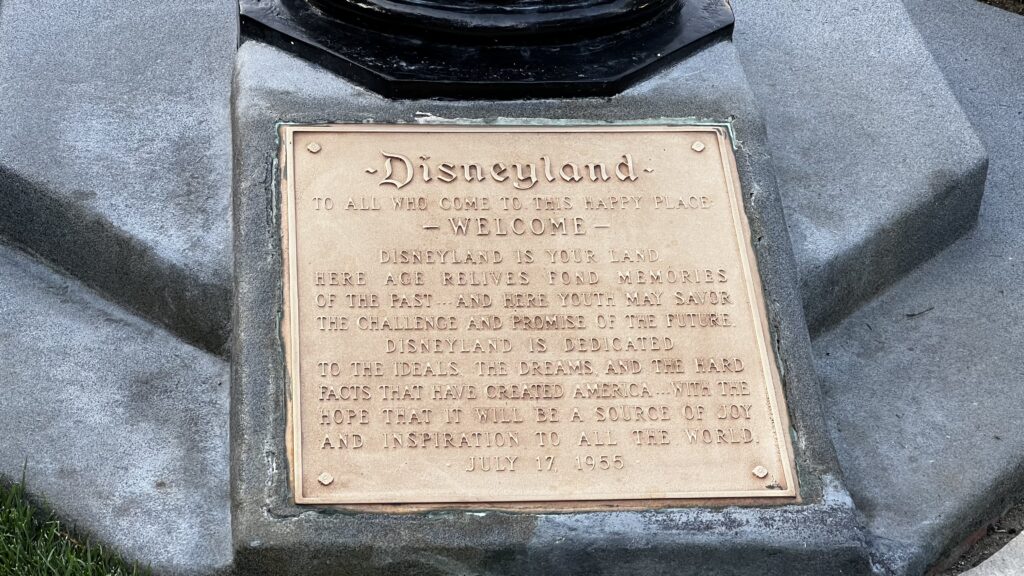 Ok, one park down, one park to go. Given how tired we were getting we just limited ourself to The Little Mermaid — Andrea was crazy about the animation when she was little. A beautiful ride with only a short wait, I highly recommend it. 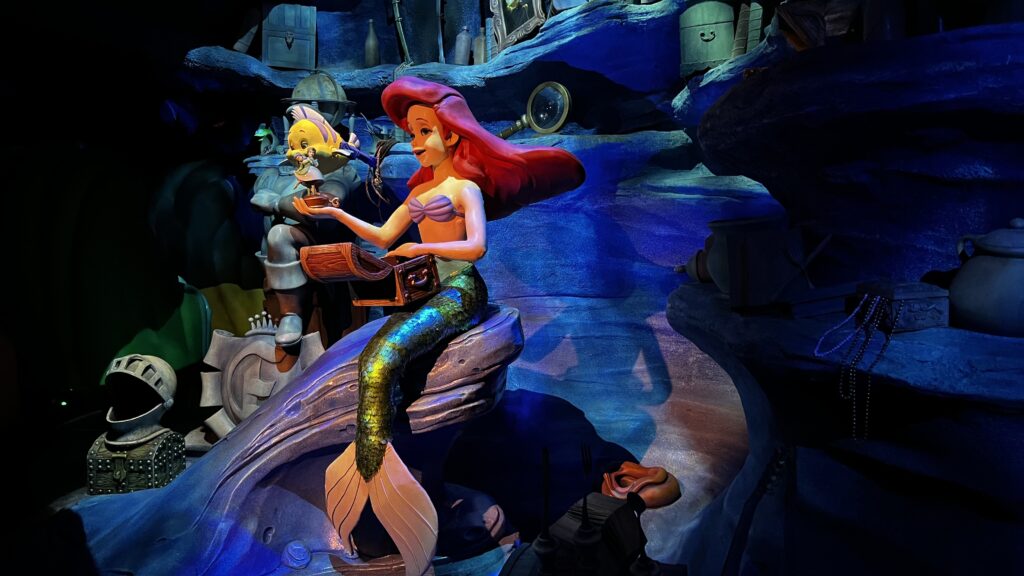 Lastly, we walked around and enjoyed some live music then headed back to the hotel exhausted but exhilarated from a sensational day. 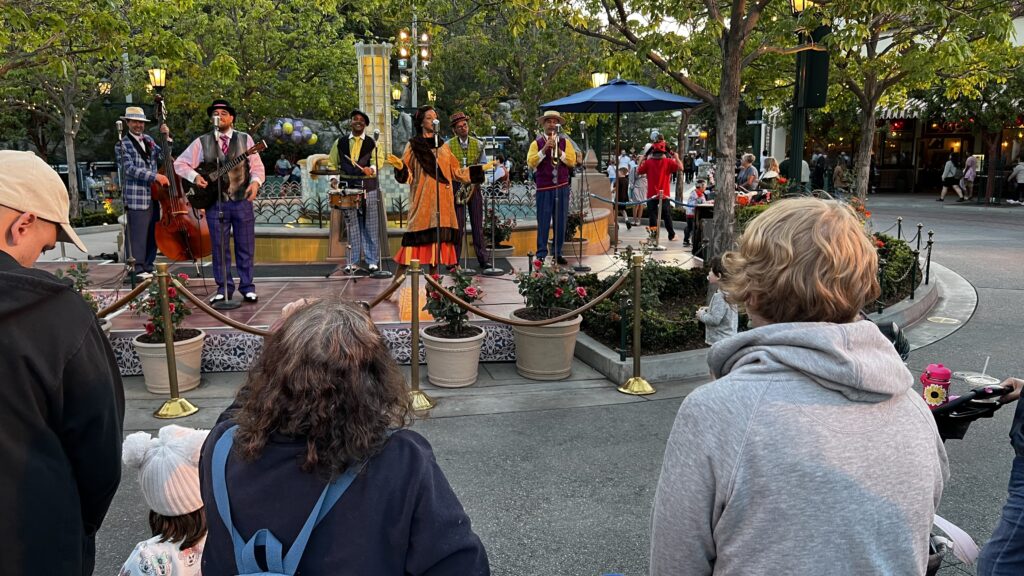 Luckily we made it back in time to catch the hot tub before they shut it down for the night.

The next morning as we were getting ready to leave, Nesslin asked if we were going to Disneyland. When she learned that we were not, she yelled out in dismay, “WHAT? Why not?!”

Such a great day — we can’t wait to go back.