Heather Armstrong, aka Dooce, just announced the release of the new book she’s been putting together, Things I Learned About My Dad (in therapy). It’s a book of essays by several of her good friends (some of whom I read regularly), about fatherhood from the perspective of fathers, wives, daughters and sons.

I’ve written two of the 17 essays, one about my father and one about Jon. A few weeks ago I gave my father an advance copy of the book with the hope that he would read what I had written, but I didn’t say anything to him other than HERE IS MY HEART AND SOUL, DO WITH IT WHAT YOU WILL. I found out a week later that he had taken it home and used it to prop up a wobbly toilet. I like to think that I improved his life by those two inches.

Sumo wrestlers are to teachers as real estate agents are to Ku Klux Klan members — or at least these are a couple of ideas put forth by the book I got for Christmas, Freakonomics. The book makes some startling connections between seemingly incongruent comparisons. 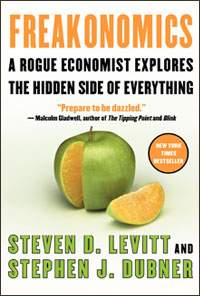 Economist Steven Levitt and journalist/contributor to the New York Times Magazine Stephen Dubner have co-authored this much talked about book from 2005. I’ve been devouring it in my spare time and I’m loving every page. It’s hard to describe exactly what the book is about because the most unifying theme one can identify within it, is that using statistics you can disprove a lot of conventional thinking.

I’m just about finished it, but in the meantime I have also been enjoying some of their other writings, both at the Freakonomics Blog and as guest posters on Google’s Blog. I have to wonder, what would Levitt do if he had access to Google’s information? Seems like there is a whole other book there waiting to be written.

If you enjoyed my previous recommendation of Blink, by Malcolm Gladwell, then I definately think you should check out Freakonomics. Oh, and if you’re interested, the chapter excerpts will give you a little taste as to how sumo wrestlers are similar to school teachers.

I finished the book that Anna left for me to read, “Middlesex” this morning. What a great novel! She sure knows how to pick them.

“‘I was born twice: first, as a baby girl, on a remarkably smogless Detroit day of January 1960; and then again, as a teenage boy, in an emergency room near Petoskey, Michigan, in August of 1974. . . My birth certificate lists my name as Calliope Helen Stephanides. My most recent driver’s license…records my first name simply as Cal.’
So begins the breathtaking story of Calliope Stephanides and three generations of the Greek-American Stephanides family who travel from a tiny village overlooking Mount Olympus in Asia Minor to Prohibition-era Detroit, witnessing its glory days as the Motor City, and the race riots of 1967, before they move out to the tree-lined streets of suburban Grosse Pointe, Michigan. To understand why Calliope is not like other girls, she has to uncover a guilty family secret and the astonishing genetic history that turns Callie into Cal, one of the most audacious and wondrous narrators in contemporary fiction. Lyrical and thrilling, ‘Middlesex is an exhilarating reinvention of the American epic.'”

Winner of the Pulitzer Prize and one of the most realistic seeming fictional books I’ve ever encountered, I highly recommend reading Middlesex.

As some of you astute readers may remember, I’ve been reading a book online called Down and Out in the Magic Kingdom. I just finished it, and now I’d like to write a little book review. Now I’m going to be quite honest with you (brace yourself, here comes the self deprecation). I’m not exactly an expert on books. I haven’t really read a lot of them. I mean I did read a bunch of Stephen King novels and I occasionally like to pick up this or that to pass the time. But as I said I’m not exactly a literary expert, and to make matters worse my writing ability is mediocre at best. So here it is – the first book report I’ve ever done that wasn’t for grades. Coincidentally I think it’s the first book report that I’ve ever done after having actually read the novel. Ok, enough rambling, it’s time to get down to business.

Cory Doctorow’s short novel, “Down and Out in the Magical Kingdom” is set in the future, I’m guessing a couple hundred years. In the future there’s no more scarcity, it’s very Utopian and it’s kind of like Star Trek where you don’t need money to get things. Also, in this world, the people don’t die. They save their identity’s to a backup and when death or illness sets in, somebody does you the favor of restoring you from back-up. There is a lot more sci-fi stuff that I won’t bog you down with now, instead I’ll move on to the meat of the story. Julius, the protagonist, is a cast member at Disney World, (he’s an important one — an Ad Hoc.) The trouble starts to brew when Debra, another Ad Hoc starts making changes to the rides. Julius is worried about her taking over the Haunted Mansion and taking the history out of it by having “scary haunted mansion experiences” pumped straight into your brain instead of the usual way of actually experiencing a scary mansion. I think my philosophy teacher would really dig this. Julius has to stop Debra, meanwhile keeping the other Ad Hoc’s and guests happy. Overall I really liked the novel and found myself imagining what life would be like if I lived in Doctorow’s world. “Down and Out in the Magic Kingdom” was fun, cheap, and best of all it only took a few hours to read (it’s just 10 small chapters).

Now you can see why I could never break 78% in English class. Maybe I can plagerize a better review from Amazon.com. I guess I was never meant to be a writer.

What am I going to do now? Well, I’d like to go to Disneyland, but instead I think I’ll go home and get some lunch.