In honour of earth day, the Boston Globe has a great collection of photos well worth checking out: Earth Day 2010 Photos. 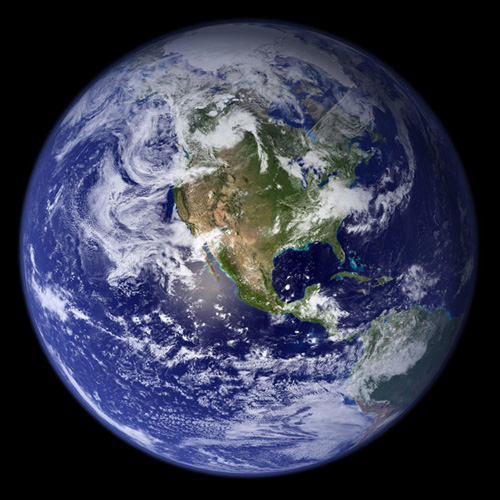 The most detailed true-color image of the entire Earth created to date. Using a collection of satellite-based observations, scientists and visualizers stitched together months of observations of the land surface, oceans, sea ice, and clouds into a seamless, true-color mosaic of every square kilometer of our planet. Much of the information contained in this image came from a single remote-sensing device—NASA’s Moderate Resolution Imaging Spectroradiometer, or MODIS. Flying over 700 km above the Earth onboard the Terra satellite. (NASA/Goddard Space Flight Center)

Last Saturday, March 28, the world turned off the lights in recognition of the environment and global climate change. Somehow I couldn’t convince my roommate that it mattered and so he spent earth hour in the glow of his room amidst a dark house on a dark street. I wondered if he would regret missing the opportunity later, as I did last year. I like to think the Earth Hour is as much about missed opportunities as taking part. Think about it.

I have to admit turning off the lights for an hour won’t do much to save the environment. It does, however, stimulate a spirit of unity and puts the problem into the forefront of our minds.

The Boston Globe’s Big Picture has posted an inspiring collection of before and after shots from Earth Hour with the lights on and off at famous locations around the world. Don’t forget to click to see the images with the lights off. 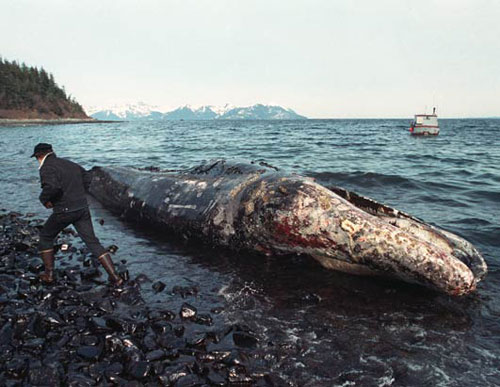 Update: The video is down.

In honour of Theodore Geisel, or Dr. Seuss, who would have been 105 today, I’ve posted part one of the environmental fable, The Lorax.

The Lorax, published in 1971, is a short story that speaks out against the destruction of the environment through the Lorax, a sage figure who speaks for the trees, only to watch his habitat destroyed by a series of unsustainable businesses. After the plants are killed and the animals leave the barren wasteland behind, the polluting Once-ler realizes the terrible mistake he’s made and urges a young boy to plant the last-ever Truffula seed to restore the beauty of the land.

Hit play or watch The Lorax on YouTube. See also, part 2, part 3, part 4, part 5, and part 6. Alternatively, here’s all the videos in The Lorax playlist.

The following logos are the Universal Recycling Symbol and Taiwan’s recycling symbol.

The familiar Universal Recycling Symbol contains three chasing arrows that form a Mobius strip or one sided loop, which is kind of cool, but notice the brilliant use of negative space in Taiwan’s recycling symbol that generates a great “aha” moment when you realize it’s there.

Greenpeace has launched a tongue-in-cheek website touting the tourism potential of the Alberta oil sands. The Greenpeace-produced site, travellingalberta.com, has an address similar to Alberta’s official tourism page, travelalberta.com, and is the conservation group’s response to the province’s $25-million campaign to improve the environmental image of Alberta’s energy industry.

Minister of Tourism, Parks and Recreation Cindy Ady was not impressed with the website.

“I’m a bit disappointed mostly on behalf of those who work so hard in this industry, but I also would say it’s not an accurate representation of this province.”

I received an email this morning outlining the Canadian Governments efforts to overturn the protection of free flowing rivers in Canada. As it stands now, the law in Canada protects the public right of navigation in Canadian waters and has done so since 1882—the right to navigate waterways in Canada is a tradition that pre-dates the beginning of our country.

In particular, Merv Tweeds of Brandon-Souris has headed up the cause for selling out on Canada’s natural resources. From his website:

BRANDON — March 13, 2008 – Merv Tweed, Member of Parliament for Brandon-Souris, is leading the review to make critical and long-overdue changes to the Navigable Waters Protection Act.

“This act controls every waterway in Canada, no matter how small, and has caused significant delay in the approval of new infrastructure,” said Tweed.

The Transport, Infrastructure, and Communities Committee, which Tweed chairs, will review the act and will be tabling a report on the findings and recommendations for change in June.

“I believe that refocusing the act will provide a more timely and predictable process for the review and approval of critical infrastructure projects,” said Tweed.

The Navigable Waters Protection Act was written in 1882 to protect the public right of navigation in Canadian waters. Unfortunately, this act does not allow for the ability to exclude anything “constructed or placed on, under, over, through or across” a navigable water, as everything may interfere with navigation to some degree.

Industry and provincial, territorial and municipal governments have, for years, been requesting changes to the NWPA to reflect current needs and respond to the increased volume and variety of uses of Canada’s waterways.

The existing backlog of approvals is impeding economic growth and the timely development and refurbishment of critical transportation infrastructure that, in turn, has the potential of creating a backlog for the implementation of projects under “Building Canada Plan”.

My favourite paragraph deserves some dissection: “Unfortunately, this act does not allow for the ability to exclude anything ‘constructed or placed on, under, over, through or across’ a navigable water, as everything may interfere with navigation to some degree.” So what he’s trying to say is, it’s unfortunate that the law protects the public right of navigation because we want to imped that right.

END_OF_DOCUMENT_TOKEN_TO_BE_REPLACED

“After the Warming”, stars James Burke, whom you may remember from the days when TLC actually showed educational television and not just a bunch of reality-tv remixes in various flavors of “how to buy a house”, “how to fix up a house”, “how to flip a house”, or “how to be an cretin while making motorcycles”.

“After the Warming” is like a special edition of Connections (wikipedia) in which we learn how changes in civilization, the weather, and industrialization brought on the current climate crisis we now face.

[“After the Warming” is] an early documentary about global warming. It theorizes and tells facts about the effects global weather has had on our history. It then theorizes a lot more about its effects on our future and especially the way in which we will overcome it’s bad effects. If you don’t mind some, not proofed, theorizing from a reasonably intelligent guy, and are interested in our climate, this is probably a must see.

I found the news clip style predictions of an increase in hurricanes, rising oceans levels, and the devastation of New Orleans particularly chilling. Some of the prediction dates were a bit off, but interesting to think about anyway.

Here are some tips from the Canadian government on saving energy, reducing green house gases, and all the while saving you money too. My friend Linnsie Clark sent this to me in an email a long, long time ago. I’m not sure I ever actually followed any of these links, but by golly I posted them to my website.

“The GWP is an index that compares the relative potential of the 6 greenhouse gases to contribute to global warming ie. the additional heat/energy which is retained in the Earth’s ecosystem through the release of this gas into the atmosphere. The additional heat/energy impact of all other greenhouse gases are compared with the impacts of carbon dioxide (CO2) and referred to in terms of a CO2 equivalent (CO2eq) i.e. Carbon dioxide has been designated a GWP of 1, Methane has a GWP of 23.” “Nitrous Oxide has a GWP of 296.”

Malcolm Gladwell’s father recently installed a geothermal heating and cooling system in his backyard. After reading his father’s explanation on the benefits of geothermal temperature control, I will definitely consider this option when it comes time to build my dream home.

“[N]ot only was the house warm but the difference in the quality of the air inside the marked. Oil heat works through combustion: it uses up oxygen. Geothermal systems heat the house with ambient air, which makes you feel like you are outside when you are inside. This summer, southern Ontario—where my parents live—has had the same heatwave as the rest of us in the Northeast, and now my parent’s house has been as wonderfully cool as it was warm in the winter.”