I went to an awards banquet tonight for being a part of the University Swim team. I never won any awards myself, but I had a good time eating the food and cheering for those that won. I think Anna-Maria was a little sad that she never got to come with me. It was really a last minute decision for me to go and so I feel bad that she never got to come along; instead she made the Vegetable Curry without me. Women are definitely from Venus.

Update: I can’t believe I never took Anna-Maria to the Blue and Gold. What the hell was I thinking? Re-reading the archives sometimes makes me feel like I was such an idiot back then.

I didn’t do any pranks this April 1st, but there’s always next year – not to mention the day is not over yet. If you’re curious read up on the Wikipedia’s entry about April Fool’s Day.

When you read articles in the Yahoo Entertainment News & Gossip and gossip section about, say, the arrest of an insider trader from the future, it’s important to remember that the article may have originated in the Weekly World News. How was I supposed to know?

I signed up for another year at the U of L today. I’m taking 5 courses this fall which is a nice increase from the 4 I took this Spring. Maybe the fact that I am only in four classes is related to the fact that I my GPA is through the roof! Or maybe it’s because Art Teachers give easy grades. Easy? As if! I worked extremely hard for my grades, and I think it’s pretty obvious that I am one of the best in the class, even if I am only enrolled in four classes.

I finished up at the pool this morning as Equipment Manager. We finished early yesterday and today and it looked like it would have been a fun meet to compete in. I had the chance to try out some scuba gear after the events yesterday and again this morning.

Amy, one of the lifeguards at the Max bell and my instructor, mentioned to me that I was on the list for call-backs to be a lifeguard there. I’m pretty excited to finally be getting a job here in Lethbridge. It will make paying the mortgage a lot easier.

The Calgary Sun reports that because of SARS, “Thousands of people, many of them health workers, are under quarantine in Winnipeg and across Ontario”. Personally I think this SARS thing is slightly more dangerous than the West Nile scare last November, but I still think it will be one of those things we hear about but never have any personal experience with. Although I think Mom said one of the students at her school contracted it.

Last night I went to Anna’s roommates birthday party. I was watching the news when the first guests arrived and we learned about a marine (an engineer actually) stationed in Kuwait who threw a live grenade into a tent filled with other Marines. The blast injured about 13 people and killed at least one. Apparently the Marines had had some problems with this guy and were planning on leaving him in Kuwait when it was time to move into Iraq. What a crazy world we live in.

Another interesting article I read this morning explains that many Iraqies would rather kill their own officers than fight the US.

It looks like my trip to Calgary has been cancelled because Anna is not going down to the States with her parents after all. I’m going to work on my animation instead.

It’s Oscar night and I’m sure Anna-Maria and I will be tuning in. Steve Martin is hosting and I read an article about where he’s getting his jokes from, which I thought was interesting.

So with the nominees list open in my other window here are my predictions:

According to CNN.com 21 deaths have been confirmed among coalition troops — 14 Britons and 7 Americans. Pretty good considering half of them were killed in a helicopter crash which was an accident. The war (according to the media) is going according to plan so far, but I still think their will be more trouble and more deaths as the ground forces get closer to Baghdad.

I talked to Mom on the phone this morning. She wanted some help with the settings in Eudora. I don’t think she ever did get everything fixed, but hopefully she is happy now that she got that Austin Powers sound changed back to the default Eudora sound. I guess, “You got mail! Yeah baby” would get irritating after the first time you heard it.

I applied for a job at the Max Bell pool. I’d rather work there than the other places that I’ve been applying because they pay much more money! I have completed about half of the 10 hours I need co-teaching to complete the course and yesterday Pat, the guy that does the hiring, came up to me and asked me to be a timer for a life guarding competition that the Max Bell is hosting. I think the fact that he knows my name and asked me is a good sign. So that’s what I’ll be doing next weekend.

The water in Lethbridge tastes bad. It has tasted bad for about a week now. I think it is from all the spring run off, but the river seems really low. More updates as they come. Have a good Saturday.

I’ve come to the conclusion that my roommate isn’t the sharpest knife in the drawer. Don’t get me wrong he seems like a smart enough guy, but he definitely doesn’t think long term. When I say long term, I actually mean a couple weeks. For example, last night I came home to find my roommate in the kitchen sporting a brand new piercing in his bottom lip. Some of you reading this may think — “Man! Jeff’s roommate is so cool!” He probably thinks he’s pretty cool too, but he won’t think he’s so cool when: #1. the money spent on a piercing would have come in real handy for food, and #2 when he can’t get a job because no one wants to hire someone with a piercing on his face.

I am back from my trip to Calgary. I was supposed to go to Medicine Hat, but I’m putting it off until tomorrow. I went and saw About Schmidt (trailer) with Anna and her sisters. It is definitely a movie made for the pre-MTV generation. Possibly the worst part was seeing Kathy Bates’ naked body — what a shock.

Gary and Tracie gave me a couple of vhs tapes that I’ll have to watch sooner or later. Raising Arizona and Born in East LA.

I didn’t go to Medicine Hat on Wednesday like I had originally planned. I didn’t feel like it today either, so because Anna-Maria and my parents are all sad that I didn’t come to Medicine Hat yesterday or today, I’d better get some sleep so I can get there in the morning.

For Valentines Day Anna-Maria bought me a book called, “If… (Questions for the Game of Life)”. It has “IF” questions in it to make you ponder what you would do if certain situations were possible or had to happen what would you do. Here are a couple of example questions from the book, “If you could spend one whole night alone with anyone in history, whom would you chose? If you could suddenly possess an extraordinary talent in one of the arts, which would you like it to be? If you could commit one crime without being caught, what crime would you commit? If your plane were about to crash and you had time to write one quick note, to whom would you write, and what would you say? If you could run any single company, institution, or organization in the world, which would you choose?

My reading week vacation starts today. I’ll have lots of time to play around on Plastic.com and Fark. I think perhaps we should have a photoshop contest on our own blog. What do you other bloggers think? 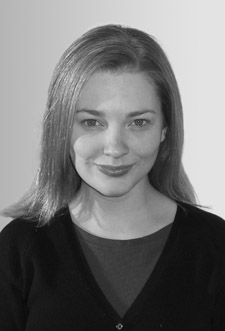 Yesterday I took some digital pictures of Anna-Maria for her application to the National Theatre School in Montreal. The best ones were taken outside and then I photoshoped them so that they had a completely white background. She had some taken in one of those two dollar photo machines at the mall, but they were way overexposed and basically useless. Anyway when I got to Cosco to have them developed — well I had saved a bunch of them on CD but there was only one that I really wanted and it was the only one that I saved in .tif format. As you might be guessing Cosco doesn’t develop tifs, jpegs only. I was somewhat frustrated but what can you do? Anna went out this morning and had them developed; they look great.

I took Anna’s roommate Zee along with me in case they asked why the name on the Cosco Club Card said Anna-Maria so that she could say, “Oh that’s me”. And when it came time to pay she did in fact pull through and say, “yep, I’m Anna”. Even though the picture of Anna on the back of the card is half worn out, Zee still looks nothing like her. Almost immediately after claiming to be Anna, Zee started talking with me about Anna’s play and if we should go see that movie The Ring, “Anna and her sisters really liked it!” I couldn’t believe her and I’m sure the guy thought we were quite the imposters / losers but he didn’t say anything.