While the full details are not yet known, ESPN appears to have an early scoop on what happened in that fatal flight.

The helicopter carrying Kobe Bryant that crashed Sunday was in a climbing turn at about 2,400 feet before it turned into a dive, a source told ESPN. According to flight-tracking data, the copter was in a 4,000-feet-per-minute descent when it crashed 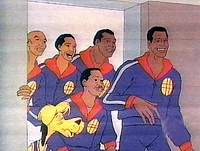 This is kind of strange. Apparently Roy Disney (Walt’s Nephew) has purchased 80% of the Harlem Globetrotters.

There used to be a Harlem Globetrotters animated cartoon back in the 70’s. I wonder if Roy can bring it back — stranger things have happened.

From The LA Times:

An investment fund led by Roy E. Disney has purchased an 80% stake in the Harlem Globetrotters, the parties said Tuesday.

Shamrock Holdings’ Capital Growth Fund, based in Burbank, said it hoped to develop merchandising and other new revenue sources for the Globetrotters, who have blended basketball and entertainment for nearly 80 years.

Manny Jackson, a former corporate executive who acquired the Globetrotters in 1993 and nursed it back from near bankruptcy, will retain a 20% ownership stake and stay on as the Phoenix-based company’s chairman and chief executive.

The purchase includes the New York Nationals, the squad that has served as the Globetrotters’ opponent and comedic foils since 1995 when the Washington Generals were retired.

From the Associated Press:

AP
BURBANK, Calif. – An investment company controlled by Roy E. Disney has bought 80 percent of the Harlem Globetrotters and will help expand the basketball team’s merchandising and licensing activities worldwide.

Shamrock manages the investments for the family of Roy Disney who is the son of Roy O. Disney and nephew of Walt Disney. The company, managed by president and CEO Stanley Gold, has invested more than $550 million in media, entertainment and communications businesses in the United States.

The closely held Globetrotters will celebrate their 80th anniversary next year.