Apparently nobody recognized the former NHL superstar during this “every man” weather report from Fox 25 asking what folks thought of the crazy amount of snow that had fallen.

“I like the snow, I like the winter, but not necessarily this,” said Jarome Iginla. “May be a little too much.”

“Pretty tough, we’re from Canada, so it’s not too crazy,” Iginla said. “I mean we got some winter tires. Used to this growing up so, it’s not great, I’ll tell you, you get some tough stretches, but if you don’t go too fast it’s doable.” 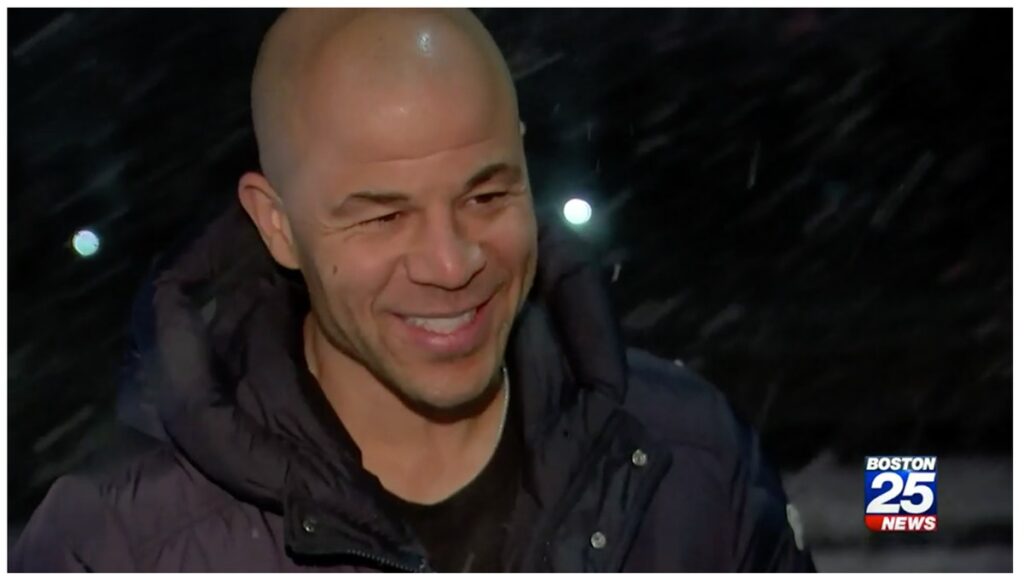 Yep, it was that Jerome Iginla. If you don’t recognize him, Iginla is a well-known superstar hockey player. He played many years for the Calgary Flames and even played a season for the Boston Bruins. He was recently elected to the Hockey Hall of Fame.

Ok, so he is their back-up, back-up emergency goalie but still worth checking out the video:

“I went to a fight the other night, and a hockey game broke out.”
-Rodney Dangerfield

I am almost ready to give up on the playoffs. With the obvious exception of International hockey, the teams I cheer for so rarely get to the finals. The Calgary Flames didn’t even make the play-offs this year. At least the weather is getting nice so I will be out playing Ultimate and road hockey a lot this spring.

I’m very pleased that Canada won the gold medal hockey game this afternoon against the USA. Our countries may be the best of friends in real life, but at the same time, I love our rivalry in sports — especially when Canada comes out on top.

I got a response from Philip Pritchard, of the Hockey Hall of Fame. He sent along an attachment from the Globe and Mail which explains why the Stanley Cup won’t be awarded to any team this year even though the NHL isn’t having playoffs.

I wanted to voice my opinion that I would like to see the Stanley Cup awarded to the best hockey team this year. I know you realize how important this is to Canadians and it’s a great opportunity to create a historic event.

Thank-you for your time and consideration.

Thanks for your e-mail and interest in the Hockey Hall of Fame. I am attaching an article for you that I hope will
answer some of your questions and concerns.
Again thanks for your note.

Phil Pritchard, vice president of hockey operations and curator of the Hockey Hall Of Fame, received his first 15 minutes of fame some years ago when he starred in a series of well-received commercials on behalf of MasterCard.

In those spots, the white-gloved Pritchard traveled back and forth around the world, sharing a series of hotel rooms and airplanes with the Stanley Cup, the most revered trophy in the world.

If the National Hockey League lockout lasts the entire season, Pritchard could be thrust in the spotlight again. As the most visible custodian of the Stanley Cup, Pritchard is getting all kinds of letters and e-mails from around the world, from people seeking to play for the coveted trophy. Last week, Pritchard passed on more than 50 of those messages to Ian (Scotty) Morrison and Brian O’Neill, the two trustees of the Stanley Cup.

The majority of correspondents want the Stanley Cup awarded, even if the NHL doesn’t declare a champion, on the grounds that the trophy began its life as a challenge cup and thus should revert to its original purpose if the league doesn’t play any games this season.

How are Morrison, the NHL’s former referee in chief, and O’Neill, a former senior vice president in the Clarence Campbell and John Ziegler Jr. eras, handling the requests?

O’Neill said he received five or six calls to his Montreal office about the Stanley Cup, all of which begin with a flawed premise.

“It’s not a challenge cup anymore,” said O’Neill. “The basis upon which it could revert back to a challenge cup is if the league decided to fold. Then they would turn the Stanley Cup back to us. That’s the way it would be done.

“Or, if you stretched a point and said, they’re not the most prominent professional league in the world, but that would be a pretty hard thing to determine.

“There is all kinds of speculation, but they’ve got to get away from this idea that it’s a challenge cup.”

Morrison added this to debate: “What if you’ve got all these guys over in Europe and (IIHF president) Rene Fasel says, ‘hey Scotty, hey Brian, our league in Europe is now the best professional hockey league in the world and we want to play for the Stanley Cup?’

“Right now, I think our response would be no. The Stanley Cup belongs to the National Hockey League and once the NHL resumes play, that’s when it will be presented.”

“The Stanley Cup just stays in the Hall Of Fame and I guess we just skip ahead and leave that panel empty,” answered Morrison. “Hopefully, that won’t happen.”

Some years ago, O’Neill and Bud Estey, the former Stanley Cup trustee, who died in 2001, amended the trustee agreement to take out the clause that said, “‘in the event that the league goes belly-up, the trophy goes back to the International Hockey Hall Of Fame in Kingston.’ We wanted that out.”

Eric Zweig, a hockey historian and managing editor of Total Stanley Cup, says in 1947, the trustees of the Stanley Cup (P.D. Ross and Cooper Smeaton) granted authority to the NHL “to determine and amend … competition for the Stanley Cup.”

The seminal clause in the agreement states however, “This agreement shall remain in force so long as the League continues to be the world’s leading professional hockey league as determined by its playing caliber. In the vent of a dissolution or other termination of the National Hockey League, the Stanley Cup shall revert to the custody of the trustees.”

In the early days, before the NHL gained control of the Stanley Cup, the trustees held a more active role than they do today and generally favored a team’s right to the trophy over that of a league.

Almost a hundred years later, what if the owners of AK Bars Kazan, the team that boasts 11 NHL players, including three prominent members of the defending Stanley Cup champion Tampa Bay Lightning (Vince Lecavalier, Brad Richards and Nikolai Khabibulin), wanted to challenge for the Stanley Cup? Even if Kazan signed the rest of the Lighting players to contracts and went on a barnstorming tour of Europe, they couldn’t do so, if the trustees followed the historical precedent.

In the 1910-11 season, as the National Hockey Association and its players were involved in a salary cap dispute, the players considered forming their own new league. Some players from the Montreal Wanderers petitioned for the Stanley Cup, but were refused by trustee William Foran, on the grounds that the trophy belonged to the club, not to the players.

Thus, if the Stanley Cup were to revert to its original role as a challenge trophy, history suggests that the only man who could petition for its custody, according to Zweig, would be Lightning owner Bill Davidson.

For that to happen, Davidson would first have to break ranks with his fellow NHL owners and the Lightning players would have to agree to go back to work for him en masse. Still, in the unlikely event that that scenario unfolded, then the trustees would have to at least consider letting Davidson have access to the trophy – and in that way, the Stanley Cup would return to its original roots.

It’s not going to happen, but it’s fun to think about – as all of Pritchard’s e-mail traffic would imply.