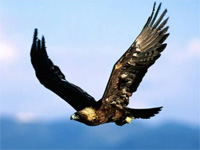 One of the most notorious birds of prey, the Golden Eagle develops a wingspan averaging over 2 m (7 ft) and up to 1 m (3 ft) in body length.

If you haven’t already seen it, the following video demonstrates the bird’s vicious killing technique as it literally plucks goats from the side of a mountain sending them tumbling to their doom.

If you’re at all sensitive about seeing animals die, you really shouldn’t watch this. At one point it looks like the goats might get even, and I hate to spoil it, but a few minutes later the bird is still snatching up goats for breakfast.

Disturbing video of the Golden Eagle throwing goats off cliffs