From the best of my feeds:

Malcolm Gladwell calls the New York Times on their misleading story about the costs of prescription drugs.

Jason Kottke explains how brands that are so recognized actually run the risk of losing their trademarks due to people’s everyday usage of the words (did you know Escalator was a brand?)

25 years in the making  (youtube playlist) is a collection an unofficial clips from a fan restoration of the world’s most ambitious animation project. Directed by Richard Williams (of Roger Rabbit fame),  for an enchanting peek at what might have been.

Update: Cartoon Brew just posted a great interview with Garrett Gilchrist the person responsible for The Thief and the Cobbler Recobbled.

Even with the broken links, I’ve decide to leave this page up for posterity.

I just read a “review on Cars” by Michael Howe and in case it’s hard to tell, I’m so excited to see this film I’m about to explode!

It’s been over 1 ½ years since Pixar released their last film and — if anything — that last extra half-a-year has probably added to a growing eagerness to see this film. In this day and age, it’s difficult to find decent films, let alone those that will leave families feeling that their hard-earned money was well spent. For those who may be wondering, “Cars” is definitely worth it and more. Pixar has never talked down to their audiences, and it shows. The parents will get some of the jokes, and the kids will laugh at some, and then later — when they grow up — they’ll go “Oh, that’s what he meant.” I’m already planning to see it again with my friends when it comes out, and I know they’ll enjoy it as well. Personally, this is the first time this year I’ve been so eager to put down $9.50 to see a movie again!

Update: Ok, I went to see the show last night and I absolutely loved every minute of it. Actually there was one thing I did not love but I’ll get to that in a moment.

First off the technical aspects of the movie, (ie. the rendering and animation) are brilliant. Pixar has really outdone themselves on this one; if it wasn’t a great story, this movie would still be fun to watch just for the amazing imagery. The animation was also extremely well done. I love how something as stiff and inflexible as a car normally is can be turned into a living personality with feelings and emotions all the while keeping the cars realistic by not turning them into some kind of mushy mess.

You’ve also got to love the personalities in this movie. They all have their perfect place and I didn’t feel that any one character was overdone. I agree with Michael Howe’s review that Paul Newman did a particularly fantastic job as Doc Hudson, The Hudson Hornet. It was a magical moment seeing Doc race around the dirt track hitting that turn just right.

But the thing about this movie is that it’s FULL of magical moments. Every character has their moment and their chance to shine.

Now for the one thing that I did not love. I’m the kind of guy that occasionally likes to stay and watch the credits after a movie I liked has reached the end. For a Pixar movie, it’s a given that you’re going to stay to watch the cute “extra” jokes they through in at the end. I was particularly looking forward to it as I’ve heard from some of the early reviews that this movie has some good ones.

The credits came up and before they could even get going—SQUEEEEEEEERTCH! The focus went really bad as the film either jumped off its track or started to bunch up in the projector. Either way the show was over and I didn’t get to see the “post credits” jokes. I guess I’ll have something to look forward to the next time I watch Cars, because it’s worth seeing again. Seriously everyone who goes will love this movie—and if you don’t, well then, it’s time you started to let yourself feel again.

Oh I should also add the One Man Band short, while cute wasn’t nearly as memorable as the Boundin one from The Incredibles. Having said that, one pre-movie bit of entertainment that really stoked my fire was the sneak peak at Pixar’s Ratatouille (Apple Trailer) coming out in 2007. 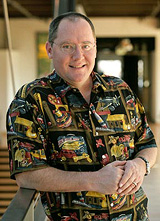 I really enjoyed reading CNN Money’s interview with Pixar’s John Lasseter. The piece has the most extensive comments I’ve seen from Lasseter regarding the Pixar/Disney negotiations. My favourite quote is the comparison of Pixar taking over Disney Feature Animation being like Nemo swallowing a whale.

I came across this great editorial in the New York Times about the Disney-Pixar deal. One thing I’ve learned recently about the deal is that the company is purging itself of most of the middle management that isn’t directly involved in creating the artwork. What they are doing is recreating the old Disney studio from the 1930s when Walt was in charge and story was king.

In the end, Disney is doing something that perhaps no other corporation of this size has ever done: actively de-corporatizing itself. It is reassigning authority from the bureaucracy to a small group of creative individuals. It is, in short, trying to resurrect Walt Disney and his early hands-on management style. Running the company out of his own head was a difficult enough task for Walt Disney himself. Whether the new crew can pull it off is anyone’s guess. But if they do, it will reverse the dynamics of the entire entertainment industry by empowering the putative visionaries over the suits.

Times Article – When You Wish Upon a Merger.

I’ve been hearing rumours about Disney buying Pixar in an all-stock deal for a couple of days. Here is the lowdown:

The Telegraph article was the first one that I heard of announcing the deal.

Today the New York Times reports that Disney may announce their acquisition of Pixar as early as tomorrow. According to the Times, the deal would combine Pixar with Disney’s animation unit and give Mr. Jobs a seat on Disney’s board.

The LA TIMES article Walt’s Shoes at Disney Could Be a Fit for Jobs draws an interesting parallel between Steve Jobs and Walt Disney.

Harry Mccracken has a collection of interesting questions about the Disney-Pixar merger on his blog posting, Disney+Pixar=?.

Update: Over at Cartoon Brew they have a copy of an email from Walt Disney Feature Animation President David Stainton as he prepares to hand over the position to John Lasseter. Especially interesting is the comment from an anonymous Disney director.

After reading this (Updated link:) wdwmagic forum article about a scuba-diving dentist that claims Disney and Pixar Animation Studios stole the idea for the hit film “Finding Nemo” from him, I think he may have a case.

He claims he submitted an illustrated manuscript to Disney and talked on the phone about his story with a writer from Pixar. (The two companies have a distribution partnership.)

A Disney vice president told Sternberg in 1996 that although the story had “great potential,” it did not fit into the studio’s “development slate” at that time, according to the suit.

Seven years later, Sternberg was in a movie theater and saw a preview for the upcoming release of “Finding Nemo.”

“I thought, ‘Hey, I’m the scuba-diving dentist. Those are my characters, that’s my story,”‘ he told The Star-Ledger of Newark for Wednesday’s editions. “It made me sick to my stomach.”

One big similarity: Sternberg story has a character named “Nimo.”

The thing is, before he submitted his manuscript he signed a two-page waiver that said he would be entitled to only $500 if he were to claim that the company used his material without permission or authorization. His lawyer is asking the court to void that waiver.

END_OF_DOCUMENT_TOKEN_TO_BE_REPLACED

I’m guessing this short film Tin Toy will be featured at the beginning of one of the next two new Pixar movies (either The Incredibles or The Cars). But why wait, check it out now – it appears to be a test piece for Toy Story and it’s actually quite brilliant.

In the realm of feature animation, the hand-drawn no longer rocks the cradle. Thanks to the consistent success of Pixar’s five computer-rendered theatrical releases, coupled with Disney’s recent failure to produce popular hand-drawn films, it’s easy to see why folks are favoring bytes and pixels over ink and paint.

Slashdot is offering up a great article and discussion thread about Disney’s abandonment of traditional, hand-drawn animation (which Disney has sworn, for years, it would never give up), in favor of 3D, computer-generated work.

Supposedly, all of their animators—even staunch traditionalists such as Glenn Keane– are being trained on 3D computer animation techniques. The last hand-drawn high-budget Disney feature scheduled for release is Home on the Range, which is due out next April. It appears that Disney is bowing to the supposed pressures of the market, even though the hand-drawn Lilo and Stitch was considered a success and the all-CG Dinosaur (done at Disney’s now-defunct FX house The Secret Lab) was not. However, I believe there’s another factor at work: Pixar’s contract with Disney is set to expire soon, and the revered CG house has been making their own demands of Disney for the contract’s renewal.

It’s no secret that Disney feels threatened by 3D Animation. “For the first time in decades, the entertainment giant that pioneered feature-length animation with 1937’s “Snow White and the Seven Dwarfs” has no traditional animated big-budget movies in production.” Disney has not only fired many of it’s traditional 2D animators, but it has also been auctioning off the tools of the 2D animation trade, a sign that they don’t plan on rehiring new animators. “Among the items listed [for sale] was an animation desk for $1,299; a story board for $54.15; and a 6-foot-tall cabinet for stacking scenes for $64.95.”