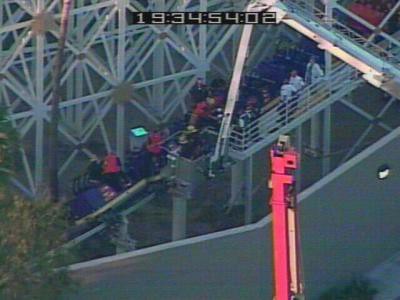 As any long term readers of my blog know, I’m a pretty big fan of Disneyland. However, I have to say my love of the park is slowly diminishing with all the bad news coming out of Disney theme parks lately. For instance there was a low speed collision on Disney’s California Adventure’s Screamin’ rollercoaster yesterday. No one was killed but about 15 people have minor injuries. What is going on with the maintenance lately that there have been so many theme park accidents? From NBC News 4:

Fire crews, ambulances and other emergency vehicles were at the California Screamin’ ride, which features a 108-foot drop. Crews received the report at about 6:40 p.m.

City spokesman John Nicoletti said 15 of the 48 people on the ride were hospitalized for treatment of minor injuries.

The slow-speed collision occurred on a flat portion of the roller coaster. Officials were attempting to determine a cause.

It was the second accident in four months at a Disneyland Resort park in Anaheim.

Our family are annual passholders and we go to Disneyland about 2-3 times a month. I love Disneyland. But I must say that with all the accidents in within the recent months and past year, makes me a little concerned. :(

Thanks For the sugges6ion on my blog about Flickr, but ill just Stick to Leon from RE4… Bloody Violency Goodness.

We used to go ALL the time, but since people started dying in the parks we've been a little nervous and we didn't renew our annual pass.

Sorry to hear there was another incident.

Im scared of incredicoaster breaking down and smashing into train