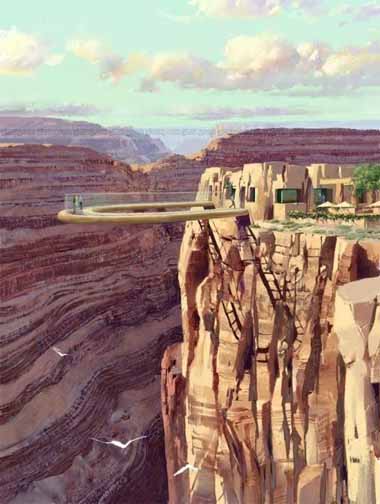 Update: Here is another image of the Grand Canyon walkway, apparently from M.R.J Architics. 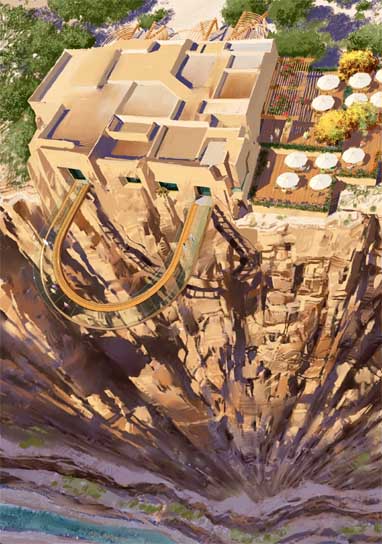 You say it's designed to hold 72 million pounds. I don't think so. I also will have to see the thing to believe that's it's for real.If anything ever looked like a hoax, this does.

I think the Brooklin bridge will only hold 35 million pounds.

PHOENIX (AP) – Beginning in January, tourists should be able to glimpse the Grand Canyon's floor through a glass-bottomed walkway jutting 70 feet from the South Rim.

The horseshoe-shaped skywalk is part of the Hualapai Tribe's $40 million efforts to turn 1,000 acres of reservation land into tourist operations that someday could include a high-end resort, golf course and campgrounds.

The destination, known as Grand Canyon West, also will feature an Indian village and Western-themed town, which are scheduled to open Sept. 1.

Visitors to the skywalk will pay $25 for a bird's-eye view of the canyon.

The skywalk could help double the number of visitors to Grand Canyon West to 500,000 a year, said Sheri Yellowhawk, chief executive officer of the Grand Canyon Resort Corp., a tribal-owned company that oversees the project.

"You're basically looking 4,000 feet down. It's a whole new way to experience the Grand Canyon," Yellowhawk said. "We think that that's what's really going to make the destination bloom."

Yellowhawk said the skywalk will accommodate 120 people comfortably although it is designed to hold 72 million pounds.

The walkway has a glass bottom and sides and is supported by steel beams.

Las Vegas-based architect David Jin came up with the idea for the skywalk in 1996 during a trip to the Canyon.

He teamed up with Lochsa Engineering, also from Las Vegas, whose portfolio includes Mandalay Bay Hotel and Hard Rock Hotel.

Jin calls the skywalk "very safe" but said an insurance company has yet to sign on.

The Indian village will feature a self-guided tour through dwellings and tepees.

The Hualapai Tribe is also positioning itself to be able to handle more visitors by improving its airport.

It will use a $2 million grant from the federal government to build a solar energy project to reduce costs at the airport, which now runs on diesel generators.

But to make Grand Canyon West a major tourism site, Yellowhawk said the tribe will need to improve the roads and water and electricity infrastructure.

We had reservations (no pun intended) through AAA to see this back in 2007 I believe. We drove all that way to see it and they would not accept our reservations. We used their satelite phone to talk to AAA and AAA talked to them and they would not yield one bit. We would have to pay them again and then try to get our money back from AAA at a later date. At that time in order to see the Canyon Walk you had to also purchase tickets to see some indians dance or something and tickets to a cowboy lunch and watch them to tricks etc. You did not have to go see or do these but you had to pay for them. All total it was about $100 per person. We had already seen the cowboys and indian type things elsewhere. We told them to stick it and left. On our way back the way we came we stopped at a small town looking for something to eat. We asked a lady about the Canyon Walkway. Her husband worked there at the time and she said that it was pretty much a waste of money at that time. The Indians owned the property and insisted that people had to buy the tickets for the cowboy and indian shows or they could not see the Canyon Walk. You also could not take cameras, cell phones or much of anything else on the Walk. If you wanted pictures you had to buy them. I thind they are just greedy