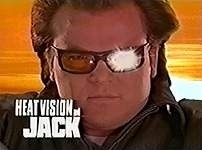 A couple of years ago I came across a link on Waxy to a TV show pilot titled, “Heat Vision and Jack” produced by Ben stiller and staring Jack Black and Owen Wilson.

Jack Black stars as Jack Austin, an astronaut on the run from NASA after a solar accident makes him the smartest man in the universe. Owen Wilson plays his talking motorcycle. Produced by Stiller, who also appears in the introduction and as a strip club DJ.

It’s a classic in it’s own cheesy way, and now that I’ve found the link, if you’re a fan of Ben Stiller, Jack Black, or Own Wilson, then I think you’d better check out Heat Vision and Jack. (Approximately a 300mb torrent but well worth it)

One reply on “Heat Vision and Jack”

[…] couple of months agoÂ I wrote aboutÂ a cancelled TV show from the 90's called Heat Vision and Jack. For those of you that missed it […]