I’ve always possessed a fascination with optical illusions, subliminal messages, the unconscious mind, and cognitive psychology in general. I think that’s why I found the idea of messages in music when played backwards so fascinating.

Back in 1998 I went on a mission for the LDS church. I was serving in the most unlikely place of Salt Lake City, Utah. Using the line, “we were just in the neighbourhood” seemed a little disingenuous when the temple marked the skyline behind you. There are a lot of Mormons there so we had to be a little more creative.

There are, however, a lot of people that are not members of the church. One of my favorite things about my mission was meeting people from all walks of life and from every imaginable social and economic backgrounds. The diversity of people I met ranged from those that were on the verge of being homeless, to literal billionaires.

Regardless of background, we (as missionaries) wanted to get our message out and influence people in as positive a fashion as we could. One of the methods of sharing our beliefs was the use of cheesy promotional videos that protreyed value of the family/church/good morals, etc. 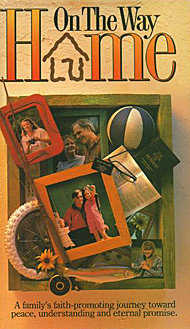 One specific movie that I showed to investigators of the church was the movie, “On The Way Home”.

It’s a quaint little movie about a family who goes through the pain of the loss of their daughter/sister and meet some sister missionaries who teach them about God’s plan, The Plan of Salvation™.

The interesting thing about this movie is a rumour that I heard from another missionary about it containing subliminal messages. I was pretty sure it was just one of those missionary urban legends, because OBVIOUSLY the church wouldn’t buy into subliminal messages, not to mention the fact that even if they are “positive” messages, it sure leaves a bad taste in ones mouth to think I was being used as a pawn to subconsciously brainwash people. (Not me! I was there to help people.)

“What kind of subliminal messages?” I probed. The other missionary explained to me that near the start of the movie, when one of the main characters is jogging home for his baptism there is a bike race and someone says the words, “don’t do drugs” but it’s muffled and hard to make out on a conscious level—unless you are specifically listening for it. So while that message didn’t seem like something you would expect, I still wasn’t convinced.

The message I remember him telling me about most was (and there may be more, but it’s this one that I remember) during the sister missionaries discussion, as they are teaching the family a lesson, the soft lighting and relaxing music which are in themselves creating a very serene and peaceful environment suddenly appear bubbles floating around behind them.

“Bubbles? What? Why?” I couldn’t imagine that this was actually true. Surely I would have noticed bubbles. What would be the point of bubbles anyway?

Well the explanation went something along the lines of, “bubbles are supposed to induce feelings of peace and tranquility. They remind people of their youth and are relaxing. People subconsciously see the bubbles and it makes them feel good. When they feel good about your message they are more likely to act on it.”

I had to see it to believe it. I will always remember the next house I showed that video to. They were a super family that had just moved in to Utah and seemed quite interested in learning more about the church. As we sat there watching the movie I could hardly believe my eyes as tiny little bubbles started floating up in the background. I looked over at the others watching the movie intently. They didn’t notice.

They did however decide to get baptized. I wouldn’t try to say that the movie was the reason for it, I mean come on, bubbles? But nevertheless there you have it. Subliminal messages in “On The Way Home”.

Update (October 2022): I found a copy of the film on Youtube. I’ve updated the part about a sign that says don’t do drugs to reflect that it’s actually the sound of someone’s voice saying “don’t do drugs”. It’s hard to make out and one can’t ignore the power of suggestion when trying to decide what you hear. The sound happens at 18:29.

As for the bubbles, I do see something, but now I think it might have been dust floating around in the room where the film was shot. See 16:50.

There may not be anti-drug sound bites or calming bubbles intentionally placed to remove our agency, but the movie is manipulative. The grieving family is promised that if they join the church, follow the church’s rules including 10% of income for the rest of their life, they can see their dead daughter again. I hate admitting it but I can’t help but miss the message of hope it provides. Watching it now still gives me tingles—but it’s so manipulative!