Darwinist’s rejoice and creationists look the other way after the discovery of “a prehistoric critter that represents a missing link in the evolutionary chain”. Paleontologists from the University of Chicago and several other institutions dug the fossils out of rock formations discovered on Ellesmere Island, in the Canadian Arctic. 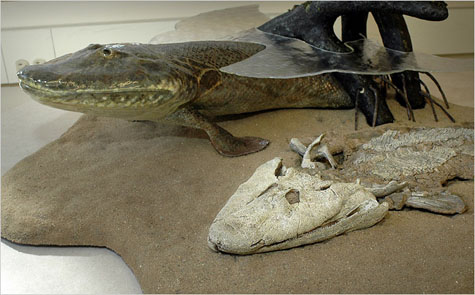 Fishapod dates from about 383 million years ago. It had the scales, teeth and gills of a fish, but also a big, curved rib cage that suggests the creature had lungs as well. The ribs interlock, moreover, unlike a fish’s, implying they were able to bear fishapod’s weight—an unnecessary trait in a fish. It had a neck—most unfishlike. And, most surprising of all, its pectoral fins included bones that look like nothing less than a primitive wrist and fingers.

Boingboing has the fishpod details.