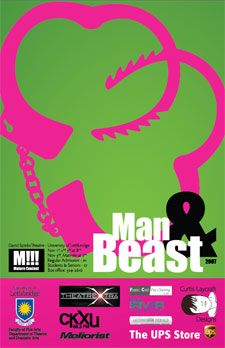 There is a new play opening at the U of L on Thursday. It’s a bit out there for my usual theatrical consumption, however, I think sometimes it’s good to challenge yourself and can you really go wrong with a play about sex?

Director Ben Hart gave me a ticket to see this show, so I guess I’ll find out on Thursday.


Here is a quick description from director Ben Hart:

In the traditional western moral system, right and wrong are meanings we ascribe to actions, generally based on the action itself. Rape and murder, for example, are generally classified as wrong, regardless of intention. But it is important to remain critical, not of IF these actions are wrong, but why they are wrong.Why do we have these rules in the first place? Yes, they are often generated through cultural traditions such as religion, but why do they last?

I am a firm believer in self-ownership. At the most basic level, we own our bodies. These rules exist as an extension of that statement. There really isn’t a simpler explanation for why we would generate social rules than that breaking them violates our rights as self-owners, and only we get to decide what happens to that body. That’s what makes these heinous acts wrong, consent, or lack thereof. Consent is the difference between sex and rape, even if objectively the action is the same.

More intricate than the the rules above, are the rules that govern a relationship. They exist for the same reasons, to protect each other’s emotional interests. But the western world has latched onto monogamy as the primary relationship form, generating all sorts of trouble. In a world where monogamy is the only legitimate relationship lifestyle, communication breaks down. This leads to cheating, which like rape, is action without consent of all parties.

Man & Beast is about consent, and the greater responsibility that it comes with.

From the Press release:

New Play at the U of L Questions Sexual Ethics

Man & Beast is a brand new play written collectively by several U of L students about sexual freedoms and responsibility. The show runs November 1st, 2nd, & 3rd at 8pm in the David Spinks Theatre, with a Matinee at 2pm on November 3rd.

The play follows the lives of several characters whose views on sexuality are at a crossroads. Robert and Suzanne are a long term unmarried couple who seek to expand their relationship by including their friend Andy, not only sexually, but emotionally as well. Meanwhile, Christian and Brenda are in a failing marriage, and Christian embarks on a destructive path of self-exploration with no caution for consequences. The desires of both couples finally collide, with tragic results for everyone involved.

This intriguing plot is surrounded by a host of unlikely comedic characters, which make the play lively and fast-paced,” says director Ben Hart, a theatre major in his final year at the U of L. Man & Beast originated as a modern adaptation of Dr. Jekyll and Mr. Hyde, with a focus on sexual compulsion. The project has since grown into a theatrical piece that challenges many of our culture’s most rooted values about sexual responsibility.

Man & Beast is the second production of the U of L Department of Theatre and Dramatic Arts’ TheatreXtra 07-08 Season, A program to which U of L students may apply to have a theatre project produced. The budget is minimal, the impact is great!

Man & Beast is supported by the U of L Department of Theatre and Dramatic arts, The Lethbridge Herald, The UPS Store, 107.7 FM The River, Fabric Care Dry Cleaning, The Meliorist and CKXU 88.9 FM.

Man & Beast runs from November 1st -3rd at 8pm in the David Spinks Theatre, with a matinee at 2pm on November 3rd.

Tickets are $11 Regular, $7 for Students and Seniors.