The National Holiday of Quebec is celebrated annually on June 24, St-Jean-Baptiste Day (the feast day of St. John the Baptist). Yes, it’s odd that a province has its own “national” holiday, nevertheless, it’s a good excuse to celebrate French Canadian culture.

Certainly an unexpected surprise to me is that it’s celebrated even here in Southern Alberta. The Association Canadienne-Francaise de l’Alberta (ACFA) is hosting a party (today) for St-Jean Baptiste day with a barbecue, campfires, fireworks, dancing, and a beer garden right here in Lethbridge. 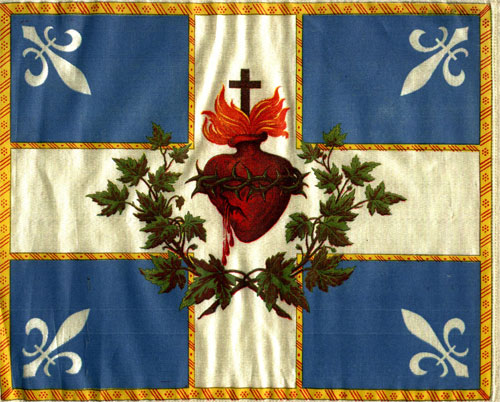 Drapeau Carillon SacrÃ©-Coeur: A Carillon flag waved by people on Saint-Jean-Baptiste Day from its creation in 1902 until 1948. The current Flag of Quebec is based on this design, and was adopted in 1948. (Source: Wikipedia)

Reading up on St. Jean Baptiste Day, I learned (or possibly relearned) that the Canadian national anthem, O Canada, shares its origins with this celebration:

On June 24, 1880, the Saint-Jean-Baptiste Society organized the gathering of all francophone communities across North America. The event was the first National Congress of French Canadians (CongrÃ¨s national des Canadiens franÃ§ais). On this occasion, the citizens of Quebec City were the first ones to hear the “Ã” Canada” of Calixa LavallÃ©e, based on a poem by a Quebec Superior Court judge, Adolphe-Basile Routhier.

The song was commissioned by the Saint-Jean-Baptiste Society. It was well received but did not become a widely known song for many years. (English words were later written for a royal tour in 1901. In 1980, “O Canada” became the official national anthem of Canada.)

I’m surprised you hadn’t heard of it until today.

I have been planning on going since I heard about it on Wednesday.

They’ve been doing it for years, before we even moved here. I’ve wanted to go, but still haven’t yet.