Before flying out to sunny California tomorrow, Ange and I will make a couple of stops. The first is to see my sister Jackie and her boys. The trip to Okotoks looks like it might be a little snowy but ironically that makes it all the better — we can’t wait to get out of this frozen desert so that we can have fun in the sun and maybe enjoy a little frozen dessert.

One of the things I noticed studying up for our trip was the Captain EO Tribute show now playing at Disneyland. As a kid visiting Disneyland, I always wanted to go to the original show, however, either it wasn’t playing or the lines were too long and I never got a chance to see it. Looking at the show’s logo I had a flash of nostalgia and made a connection with my childhood that I had forgotten about years ago. 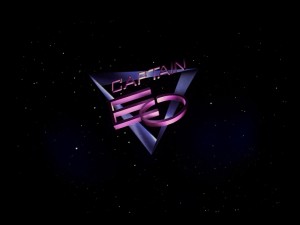 I was always a bit of a daydreamer, doodler, type and the Captain EO logo was something that I took back from my trip and would draw over and over in elementary school, modifying and warping it as time passed. Eventually we were asked to create a personal logo in that class and what I came up with became a symbol that I have redrawn hundreds if not thousands of times since. Though I had forgotten its origin, I believe it was a direct response to the Captain EO logo. Here is a quick drawing I made of it just now:

Do you see the resemblance? Maybe it’s just me but it makes me smile. I’m hoping to catch the Captain EO tribute while I’m down there. If you’re unfamiliar with the story, here’s a very quick summary.

“Michael Jackson is Captain EO, who with his rag tag band of alien creatures travels across the galaxy to find and alien queen and deliver a gift. This gift is in the form of a song that will change the world, from a dark, gloomy, evil world to one that sings and dances in a 80’s version Munchkinland.”

2 replies on “We’re off to See the Hutchinsons”

Captain EO hadn’t opened yet, we were there during Christmas holidays and the show wasn’t set to open until a week or two after we left.

Strike that, I see now that it opened in September, we must have been there in Aug.