After starting the day off with fresh picked oranges from the tree in the yard and a couple of fruit trays in the hot tub, we also had some French toast, eggs, and turkey bacon for second breakfast. We spent some time finishing up the couple remaining errands from our working lives and when it was done headed immediately out into the hot California sun for some fun on a bicycle built for two.

The beautiful thing about riding a tandem bike is that it compels even the grumpiest of strangers to perk up when they see the two of us racing along, ringing our bell, laughing, and loving all that is good in the world. I don’t know why it is exactly, it’s just hard not to crack a smile when you see a bicycle built for two.

After lunch, we played three rounds of a game called Sequence. Ange and I barely scraped by with a win in the rubber match making us the day’s champions for card games. 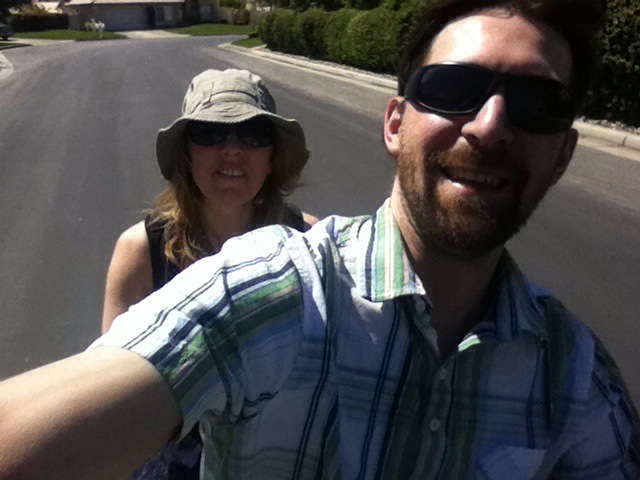 Another bike ride for some drinks and nachos at the Yard House took us through the afternoon at which time we returned to the house and indulged in another dip in the pool and hot tub (because one can never spend too much time swimming when you’re on vacation). We followed that up with dinner at a restaurant called Babe’s where the portions were humungous (and also delicious) so I give an enthusiastic thumbs up for Babe’s.

The last stop was Albertson’s for snacks for tomorrow and then a quick reminder on the steps for putting the top down on the convertible before we all headed in to bed to try and get some rest because tomorrow is going to be a very big day. We’re going to Disneyland!