The other day I learned that the tourist attraction and historical artifact, an English cannonball in a Quebec City tree is no longer there. I also learned that it probably wasn’t a cannonball, although it was likely built to be a bomb (at one point).

CBC posted the article about its history and removal last year:

It took three days of hard work, but the famous “cannonball” trapped in the roots of an American elm tree on the side of a historic street in Quebec City has been removed without any booming surprises.

Below is a photo I took of the famous tree in 2010. I was told it is believed that the ball was a cannonball shot at the French from an English ship during the multi-year siege before the Battle of the Plains of Abraham. 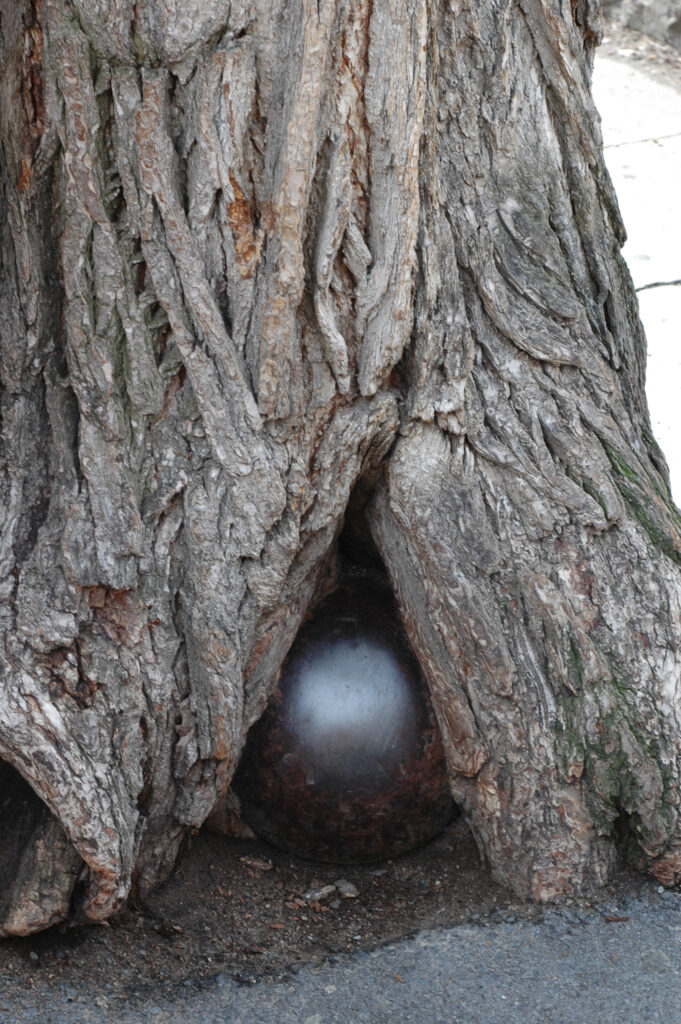 Historian Jean-Marie Lebel did his own investigation into the unmarked ball and published his findings in the June 2015 article for Prestige magazine which can still be found online.

He determined the cannonball is not a cannonball at all as those tended to be smaller and made of lead.

The ball is actually a bomb, he wrote.

Bombs like this one were hollow, metallic projectiles which were charged with an incendiary material like a cloth rag and ignited with a fuse.

So if it wasn’t a cannonball fired into the city by the English in 1759 in the siege before the Battle of the Plains of Abraham, then how did this “bomb” get there?

The ball was likely there on purpose, installed as a wheel guard to protect homes from passing carriages, the article says.

These retrofitted bombs were affixed to a metal rod that was then inserted into the ground like the bollards of today that can stop trucks in their tracks.

I liked it better when I thought it was fired there in the famous battle but I never should have fallen for it. For one thing, the “cannonball” would have had to have been there for 251 years when I saw it in 2010. Obviously the tree wouldn’t have been that old. Oh well, it’s satisfying to know the truth even if the fiction was more interesting.