I just subscribed to the Guitar Noise Podcast. In the first episode, managing editor David Hodge goes through some of the basics of strumming. If you’re just learning the guitar, as I am—my parents gave me a guitar over the holidays, then I recommend you check it out.

I hope that, as they get a little more familiar with the technology, they will take advantage of dividing their podcasts into chapters and then show relevant “artwork” such as a JPG of the strumming pattern or chords that they want you to hit. But as it stands now, it’s still a great example of using podcasts for teaching.

(Yes, I realize in order to use chapters the podcast needs to be in AAC format instead of mp3, but as an iTunes user, it’s a trade-off that works for me. Perhaps they could have two streams, a normal podcast and an enhanced m4a version.)

Despite repeated emails and Christmas cards that continually expound the details, I can’t seem to regurgitate my parents’ plans for Christmas except in the most general terms. I’m expected in Medicine Hat on Sunday? Food will be eaten? Religious differences will be tolerated? The important details just don’t stick in my mind.

However, ask me which questions I couldn’t answer on my 4th grade aptitude test to see if I qualified for AIM, and boy, do I have a list for you!

For the record, I didn’t answer “Christopher Columbus” because my fellow test taker, Christine, who finished it the day previous, told me, “contrary to popular belief it was Captain James Cook that discovered America.”

Why WOULDN’T I believe her? And to be honest, I don’t even know if Columbus is the answer they were looking for—what about the Vikings? And while we’re at it, do the First Nations people count for anything?

Don’t lose any sleep over it. I got into AIM anyway.

In case you’re curious, AIM was this once-a-week afternoon program they had for students who were high achievers. While my peers at George Davidson were learning about the First Nations (Native American Indians as they were called then) and the settlement of Western Canada, I was busy across town learning advanced science, math, and computer skills.

In AIM they taught us about negative numbers, statistics, and among other things how to use a word processor—this was a pretty big deal considering that in 1988 most people hadn’t even heard of word processors. I still remember typing away in front of those state of the art monochrome green monitors. Our teacher Mr. Freeman insisted typing would be a useful skill later in life. Who knew he’d be so right?

And even though this might sound pretty cool, I hated AIM.

One of my complaints was that I wasn’t interested in learning how to type. Computers were for games! and as any 9 year old of that time will testify, learning about home row is significantly less entertaining than Lode Runner.

They also demanded too much homework. Any extra homework, is too much. The weekly afternoon assignments at AIM more than doubled my load for the entire week. And to make matters worse, I was completely stressed out that I wouldn’t do a good job.

Homework wasn’t the worst part though.

The worst part was that none of my regular teachers had ever gotten around to teaching cursive handwriting. Mr. Freeman, liked to mix his chicken scratching with cursive shortcuts. Basically I was in a class of geniuses and I when it came time to read our homework off the board, for all intents and purposes, I was illiterate. Talk about HUMILIATING.

Mr. Freeman wasn’t exactly understanding either. There were a few of us in the same boat and he lipped us off saying that if we couldn’t read his writing, that was our problem. It was the next week that I began skipping. (How did you think I found out what everyone in my regular class was up to on Wednesday afternoons). Shortly after that I ended up dropping the program&8212;but I’ve kept the guilt.

And in so many ways, I can’t help but feel like my performance in AIM has been a reflection of my life in general. If only my circumstances had been different… if only I had a half decent teacher, or someone to inspire me… and besides whatever it is I should be doing, it’s significantly less entertaining than any number of my daily distractions.

At least I can take a break from my worries with some holiday cheer.

I occasionally get requests for materials for psychology classrooms based on the backmasking section of my website. I usually don’t send out materials, but I have been known to make exceptions, especially for professors of post secondary institutions.

I should point out that if you are teaching psychology, you may be interested in material intended for classroom demonstrations by writing John Vokey or Don Read at

and requesting University of Lethbridge, Department of Psychology, Technical Report No. 85. A blank cassette tape should be enclosed if classroom demonstrations are desired.

I imagine a blank CD would also work or maybe an empty USB thumb drive, but I would ask them first just to be safe.

You know what kind of letters make you the happiest? The kind that tell you—hey you’re kind of smart.

The UniversitÃ© Laval sent me my marks today. I got an A in CORRECTION PHONETIQUE (Phonetics) and a B- in LANGUE ORALE ET ECRITE (Oral and Written Language). La langue franÃ§aise est trÃ¨s facile. 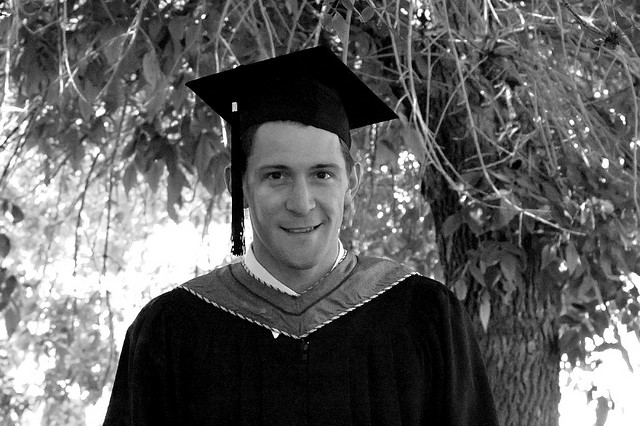 Today I received a Bachelor of Fine Arts Degree in New Media from the University of Lethbridge.

My time spent at the University passed by like the blink of an eye (with the exception of my last semester when I was only taking one class—that took an eternity.)

But alas I’m really done and now that I’ve got my piece of paper I’m free to go out and do whatever I want. The world is my oyster. (Here’s hoping I don’t choke on a pearl). 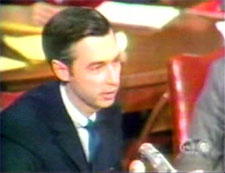 Rick Garlikov has written a compelling piece titled, The Socratic Method: Teaching by Asking Instead of by Telling. In it he demonstrates the power of the Socratic method (teaching by asking) for both teaching and also for getting students involved and excited about the material being taught.

It’s a very absorbing read—my only complaint is that he hasn’t formatted the story into nice readable columns, but if you resize your browser window and give this one a chance, I think you may find it very interesting. It works on many levels: as a method for teaching, a lesson on binary numbers, and how important it is to ask the right questions.

Tuesday was the evening of my Video Games class. The semester is winding down and I really need to get working on my final project — not to mention finish up some other somewhat overdue items.

I’ve been asked by some friends what the class is actually about. In it we talk about everything from gameplay and graphics to the cultural and philosophical implications of popular (and sometimes less popular) video games. The professor shows video clips from rare or unusual games and we learn about different genres and how things like setting and ambiance change the mood of a game.

We also talk quite a bit about gender stereotypes, violence, and the way the media portrays video game culture. It’s pretty clear that although there may be statistics out there claiming a lot of girls play video games, there are only two girls in the class and 30 very nerdy boys. (They’re not all nerds, some of us are in there doing research for blog postings). But seriously there are a couple of fairly nerdy guys in that class that drive me insane. Before this semester I wouldn’t have believed it possible to become THAT immersed in video games.

I think the most ironic thing for me is, now that I’m in the class I’ve probably played less video games than I did all summer, and yes playing video games is a requirement. I can’t explain it, but I guess it just goes to show — I’ll do anything to avoid doing homework.

Here are some great tips on writing great, productive, emails. When I worked at City Hall I discovered the myriad of emails that some people have to go through. I’m sure that if more people would practice the tips from this list their emails would have been read more often and timely, and had a greater chance of actually being acted upon. It would have made things easier for everyone. Many of these tips are also applicable to voice-mail.

Some time ago I received an email from a professor at York University. He asked if he could use part of my Stairway to Heaven backwards site / idea for a class. Here is the conclusion of his experiment.

I have now given my lecture on perception, and the Stairway to Heaven was a real hit. Before I played it backwards, (and after they had listened forwards a few times), I distributed sheets of paper with the “words”. Half the class got the Satan stuff, and the other half got my own words, which have nothing to do with Satan or religion. I realized at the outset that my words did not fit quite as well as the Satan ones, but some lines fit very well. The demo went perfectly – those who had the Satan words could “hear” the backwards lines very well, and those who got my words, could hear at least some of my lines well. Interestingly, those who “heard” my words had a very difficult time hearing the Satanic words later on when I played it again.

Thanks again so much for your [help]. It has really helped me make a very important point about the nature of perception and how we actually construct our percepts.