You may have seen fragments of video footage from the siege on the capital; hit play on the embedded podcast below to hear from the reporters who were inside.

Author/activist Naomi Klein on Q critiquing the Toronto Internation Film Festival’s spotlight on Tel Aviv. Filmmaker Simcha Jacobovici takes up the other side.

A political and artistic debate is being waged at this year’s Toronto Film Festival. An open letter of protest from the Toronto Declaration protests TIFF’s City-to-City Spotlight, which is focussing on the work of Israeli filmmakers from Tel Aviv. The signatories, which include Q guest Naomi Klein, actor Harry Belafonte, Jane Fonda and writer Rawi Hage, argue TIFF is complicit in Israel’s Rebranding campaign that aims to shift emphasis away from the occupation, especially in a year where the conflict in Gaza resulted in over 1,000 deaths of Palestinians. TIFF denies any ideological pressure was applied. On the other side of the debate, filmmakers like Q guest Simcha Jacobovici, David Cronenberg, Ivan Reitman, and Robert Lantos argue that judging films by their country of origin rather than the quality of the artistic product, is a kind of censorship.

Noami explains that the letter is not about politics and censorship but about trying to separate the propaganda from the films:

“We’re not asking for anything—that’s what’s so amazing. The reports today, in response to the statements from Norman Jewison and David Cronenberg, are kind of amazing to me because they’re all denouncing censorship. I’m against censorship. I’m not trying to censor anything. None of the thousand people who signed this letter are trying to censor anything. Even on CBC, sorry to say, they are reporting that we have a problem with the ten films. We have no problem with these ten films. I have seen some of the films—I think they are terrific and I think they are so good they deserve to be part of the regular festival programming and not politicized as part of this celebration of the State of Israel, of the city of Tel Aviv, because that’s not about art, that’s about politics.

If you’re confused about what caused the greatest financial crisis since the depression, let This American Life teach you in words you can understand, how the mortgage lending crisis started, with their episode The Giant Pool of Money and follow-up with their episode Another Frightening Show About the Economy in which we learn:

If this interests you, you might also want to check out the NPR: Planet Money Podcast.

Update: Now there is a movie about all this (by Adam Davidson no less) called The Big Short. I highly recommend it.

I went to the Naomi Klien speech at the U of L last Monday and was entertained and enraged (both at the same time) as she talked about the situations and events unfolding in the world right now and the influence that free market ideology has on the world at large. She also emphasized that new policy applied after a crisis has often been waiting for the opportunity, for people too shocked by the event to stand up against bad laws.

Here she is on HBO’s Real Time with Bill Maher (September 19):

She wrote an article for the Guardian last week which contained many of the points she made in her speech.

END_OF_DOCUMENT_TOKEN_TO_BE_REPLACED 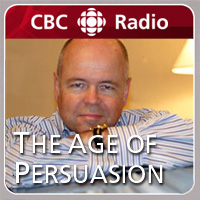 In his radio show, O’Reilly and the Age of Persuasion, Terry O’Reilly explores the countless ways marketers permeate your life—from art, media, and language, to politics, religion, and fashion—and he does it in a way that makes you crave episode after episode. You’ll never think about advertising the same way again.

I highly recommend you subscribe to the unofficial O’Reilly and the Age of Persuasion podcast.

Update: Check out my interview with Terry and Mike.

I’ve never been a believer in Freudian slips or subconscious communication, but it’s interesting to listen to Mr. Oates speculate that these kinds of behaviour happen all the time. It’s true that reverse speech sounds like a foreign language and can often even sound like English, but it would take an awful lot of research to convince me his results are anything more than a combination of coincidence and wishful thinking—nevertheless, listen to the interview and form your own opinion.

Over the last few years I’ve been secretly dying to attend the annual new media festival in Austin, TX known as South by Southwest.

My trip to Punta Cana this year took precedence but alas not all is lost because the fine folks at SXSW are releasing podcasts of all the Interactive panel sessions over the coming months. They’ve already got a few of them up.

I just subscribed to the Guitar Noise Podcast. In the first episode, managing editor David Hodge goes through some of the basics of strumming. If you’re just learning the guitar, as I am—my parents gave me a guitar over the holidays, then I recommend you check it out.

I hope that, as they get a little more familiar with the technology, they will take advantage of dividing their podcasts into chapters and then show relevant “artwork” such as a JPG of the strumming pattern or chords that they want you to hit. But as it stands now, it’s still a great example of using podcasts for teaching.

(Yes, I realize in order to use chapters the podcast needs to be in AAC format instead of mp3, but as an iTunes user, it’s a trade-off that works for me. Perhaps they could have two streams, a normal podcast and an enhanced m4a version.)