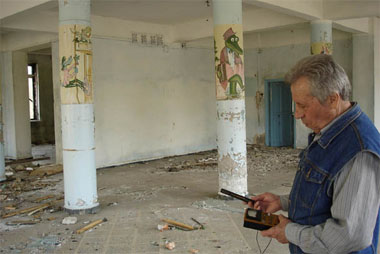 It’s just a few months until the twentieth anniversary of the Chernobyl nuclear accident (26 April 1986). Elena Filatova, previously blogged here as The Kidd of Speed, has returned to the dead zone once again.

This time she documents some of the more remote areas of the highly radioactive areas, what she calls, the Land of the Wolves.

Check out the videos, which show some of the cleanup process of the reactor and sarcophagus after the meltdown. I found the footage taken by an unmanned camera of the two metre mass in the heart of the reactor to be quite interesting. Nicknamed the Elephant’s foot, it contains enough radiation to kill a person instantly.

Expect to be hearing a lot about Chernobyl in the coming months. Twenty years after the fact, radiation levels are still too high to safely remain in the area for very long or to leave the road. Radioactivity in the plants and grass are much higher than levels on the highway.

A little while ago I blogged about the ghost town of Pripyat. There is an interesting article about a woman that drives her motorcycle through the dead zone that I wanted to link to, but her site was down. It’s now back up, updated with pictures from spring of 2004, and it is a tremendously facinating look at the Chernobyl area 18 years later.

In Ukrainian language Chernobyl is a name for a grass, wormwood (absinth) This word scares holly bejesus out of people here. If I tell someone that I am heading in a “dead zone”… you know, what I hear.. In best case- “are you nuts?” My dad used to say that people afraid of a thing which they can not see, can not feel, can not smell and that kills. Dad is nuclear physicist and he also says that of all dangerous things in my life, he can only think about one, which is riding my bike on fifth or sixth gear. In any way, dad and their team work in “dead zone” for last 18 years. They doing researches from the day when nuclear disaster happened. The rest of guys in a team are microbiologists, doctors, botanists.. etc. I was 7 years old back in 1986 and in a few hours after accident happened dad sent us with sister off with the train to Grandmother. Granny lives 800 kms from here and dad wasn’t sure if it was far enough for us to stay away of troubles. Communists kept silence about this accident. In Kiev, they forced people to take part in their stupid labor day parade and then people start learning about accident from foreign radio, from relatives of those who died and real panic began in 7-10 days after accident. Dad says, that in those first 10 days exposure to radiation was the most powerful and can not even be compared with what we have now.

Update (April 30, 2004): The Author is no longer hosting the site. She made this statement:

“‘Ghost Town’ site that was linked to this page ended existance. My purpose to show people Chernobyl is achieved. Site was viewed more then 3 million times within 2 month. I am no longer able to pay for this traffic and I had no other choice as to close this site.

For some it became weapon, for others the subject for speculations. I am out of this.., I just wanted to show people Chernobyl. I did this for free, for no fame and I did this with love for my country. If someone do not like my story, then write a better one and do not try to damp others..

Site was mirrored and copied by many people and it must be somewhere on the internet. Time will show if this is one day popularity or if it has value in itself..

I am no longer able to control or update those sites. A big thanks to people who maintain it after I quit. Also, thanks to Richard Wilson and Leonid Pankratov the authors of some photos. I got permission for using their photos on my site.

I am not involved in any commerce. Anyone who would attempt to profit from this tragedy, and those people who tried to this using my name and my site as tool to make money should be ashamed of themselves.”

Although it should be noted that I found someone has copied her site and is hosting it at: http://www.kiddofspeed.com/. I think it is safe to assume she is not the recipient of any pay pal donations to this site.

Update (May 22, 2004): Apparently the solo motocycle part was a hoax, but everything else was true.

Another Update (December 20, 2005): Her site is back up with some additional photos from new trips through the dead zone. See my post on the Land of the Wolves.