In a long but fascinating story about the Arab World’s biggest tourist destination, Johann Hari reports on the Dark Side of Dubai.

I wanted to understand how the government of Dubai will react, so I decided to look at how it has dealt with an environmental problem that already exists — the pollution of its beaches. One woman — an American, working at one of the big hotels — had written in a lot of online forums arguing that it was bad and getting worse, so I called her to arrange a meeting. “I can’t talk to you,” she said sternly. Not even if it’s off the record? “I can’t talk to you.” But I don’t have to disclose your name”¦ “You’re not listening. This phone is bugged. I can’t talk to you,” she snapped, and hung up.

The next day I turned up at her office. “If you reveal my identity, I’ll be sent on the first plane out of this city,” she said, before beginning to nervously pace the shore with me. “It started like this. We began to get complaints from people using the beach. The water looked and smelled odd, and they were starting to get sick after going into it. So I wrote to the ministers of health and tourism and expected to hear back immediately — but there was nothing. Silence. I hand-delivered the letters. Still nothing.”

A few years ago I started considering a visit to the UAE, but stories like this make me reconsider. However, at least one blogger considers this report as overkill. 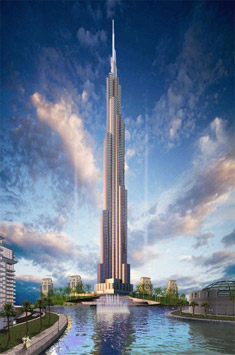 Designboom has picked out 50 amazing architectural projects currently being proposed, constructed, or developed in Dubai and its surrounding region in a new article entitled, The future in Dubai, any one of which is truly an amazing endeavor.

There is some amazing stuff there and they didn’t even mention the World Islands, a collection of man made islands made to resemble the world continents or Dubailand, a collection of amusement parks twice the size of the Walt Disney World parks.

Pictured here is a render of the completed Burj Dubai. Construction began in 2005 and is expected to be completed this year. At an estimated height of over 800 meters, it will easily be world’s tallest building when finished. It will be almost 40% taller than the the current tallest building, the Yaipei 101.

Apparently the Al Burj, when completed will take over the title of world’s tallest building at 1200 meters. That would make it more than 30% taller than the Burj Dubai and three times as tall as the Empire State Building.

Some other interesting projects not mentioned in the article: