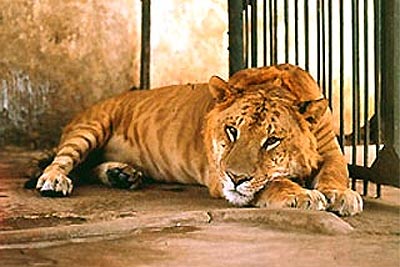 Everybody loves the previous liger image, (I get many people coming to my site for it), so just for the fun of it – here is another one.

I’m posting this on 31st of August, 2005, because I noticed that I’m getting a lot of people coming to look at the photo of a Liger that I have on this page. Well either click here or scroll down to the entry on February 13th. Alternatively you can check out the original image and story.

And after you’re done with the liger, why not check out my current posts?

Here is an actual liger!

“It’s pretty much my favorite animal. It’s like a lion and a tiger mixed… bred for its skills in magic.”
-Napoleon Dynamite

The cub is a cross between the female Bengalese tiger and an African lion. The animal resembled a lion cub except that it had stripes, and has been dubbed a “liger”, the Russian Information Agency Novosti reported.

“This was not the result of a scientific experiment,” Novosti quoted zoo director Rostislav Shilo as saying. “It’s just that the lion and the tiger live in neighboring caves in the Novosibirsk zoo, and got used to each other. It’s practically impossible in the wild.”

Here is another liger image.