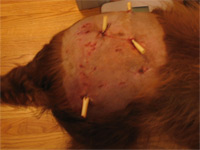 Update March 19: The news has another article up: see more below.

From the Medicine Hat News Article:

Joel and Roseanne McNarland were driving to church last Friday night when they saw what appeared to be a sad sight: a dog had been hit by a car and was injured on the walking path along 21 Avenue SE.

Roseanne told her husband to drive up to the scene. As they approached, they saw a man repeatedly hitting the dog with a snow shovel.

“He must be putting the dog out of his misery,” thought Joel.

But as they neared, it became apparent that the dog, a pitbull, had a smaller dog that looked like a Shih Tsu in his mouth, while a woman with blood covered hands desperately tried to separate the two.

The couple stopped and Roseanne instructed her husband to do something. Joel had no weapons handy and wasn’t sure what to do, but fortunately four people soon showed up with hockey sticks and shovels. Joel grabbed one of the sticks and, along with the four other people, started hammering the pitbull. They beat the dog for what seemed like a lifetime, but to no avail. He wouldn’t budge.

Then a gentleman with a goalie stick came up and delivered a mighty blow that fazed the dog enough for the smaller dog to escape. The pitbull backed away from the crowd and calmed down while two men cared for the injured woman. After administering first aid to her hands, one of the men told the crowd that one of her fingers was bitten clean off.

The group of people began looking for the severed digit, which Roseanne found hidden in the grass. She ran across the street to a house and put the finger in a bag full of ice until paramedics arrived.

Meanwhile, the pitbull was forced into a nearby garage and locked in until police officers arrived. The small dog that was mauled by the pitbull was covered in blood, but was still alive when it was taken to the vet.

As for the woman, the McNarlands say she was in so concerned about her Shih Tsu that she didn’t even notice her finger was bitten off. The News tried to contact the injured woman, but was unable to by press time on Monday.

None of the people at the scene had seen the pitbull before, but one of them stated that another pitbull was roaming around earlier in the evening. Until she is assured that there are no more pitbulls on the loose, Roseanne plans to keep her own dogs away from that area.

They were afraid that dog would strike again and in fact, Riley is no longer taking walks on that route for fear of his safety. This new attack makes them sick thinking about it.

Update March 19: Today The Medicine Hat News has a more detailed description of what happened and mentions the attack on Riley.

“I was in complete shock”
JESSE OWENS 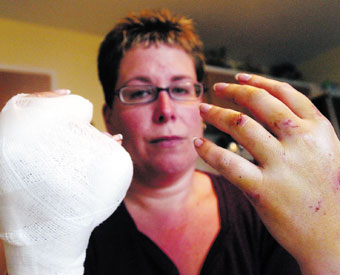 From one powerful set of jaws, Sheryle Elsasser lost her middle finger and a beloved pet. The 38-year-old mother of two was walking home with her dog of four years, Gizmo, on the path in front of the Cypress Centre Friday night when two pit bulls snuck up behind her.

The black-coloured pit bull immediately attacked Gizmo while Elsasser fended off the brown-coloured one by kicking it in the head. The brown dog strolled away as Elsasser turned her attention to her little Shih Tsu/Bichon Frise dog.

“I was in complete shock, screaming at the top of my lungs, hoping someone would hear and help because I knew I couldn’t get him off,” says Elsasser while sitting at her kitchen table.

As Elsasser frantically tried to pull the dog’s jaws apart, more and more people came to her aid with hockey sticks and shovels. By the time they got the black pit bull off Gizmo, the dog’s teeth had already severed off most of Elsasser’s right middle finger. Elsasser was so concerned with saving her dog, she didn’t even realize she lost the majority of her finger until the melee was over.

Elsasser now sits with her husband by her side in her kitchen, her right hand extensively bandaged and left hand full of cuts. The doctors at the hospital weren’t able to reattach her finger and her puppy died on Sunday night from its injuries. Her husband, Neal, gently comforts Elsasser as she quietly weeps.

“The thing is,” Neal softly says, “our 10-year-old daughter was sick that night. She would have been with her. She goes walking with Sheryle all the time. I don’t even want to think what would have happened if she was there.”

The couple had never seen or heard of pit bulls in the area before the evening of the attack, but on Jan. 10, an eerily similar event occurred on the same walking path.

Wendy Wolcoski was walking her Irish Setter, Riley, when a lone pit bull started circling her. The dog lunged at Riley and latched on to its hind leg. Fortunately, Wolcoski and her pet were able to escape the incident without further damage.

City bylaw manager Fred Crittenden says they confirmed that both attacks were caused either by the same dog or by a dog from the same household.

The Medicine Hat Police Service reported that the two pit bulls involved in the Elsasser attack belong to two men who live in the same house. Ironically, the owner of the pit bull that attacked Wolcoski’s Irish Setter was forced to pay fines of $350 for the incident by March 14, the day of the Elsasser attack.

The black pit bull responsible for the latest attack is currently in custody and Crittenden says they will be in contact with the city solicitor next week to determine the animal’s fate. The dog’s 26-year-old owner is currently being charged with four offences. Each one could result in maximum penalties of $10,000 or a year of jail time.

Elsasser and her husband both agree the dog should be put down, but regardless of the outcome, they are mainly concerned with their family’s safety. They are only letting their 14-year-old son deliver his papers if he carries a sawed-down hockey stick with him.

I HAVE OWNED ONE PIT BULL IN THE PAST AND THEY CAN BE GREAT DOGS. ANY BREED OF DOG WILL AND CAN DO THIS. JUST NOT THE PIT BULL BREED. YES THEY HAVE A BAD NAME. IF A LAB WOULD HAVE DONE THIS TO SOMEONE IT WOULD NOT HAVE BEEN PUBLISHED BUT BECUASE OF THE BREED IT HAD TO BE SHARED. JUST STATING THAT IT IS IN THE WAY YOU RAISE YOUR ANIMAL NO MATTER WHAT BREED THEY MAY BE.

Not all breeds of dogs are capable of doing this, your hyperbole doesn’t fly with me. Yes, bad owners are to be blamed but it is disingenuous to say that the kind of dog makes no difference. Pretending that “pit bulls” will only behave wildly with bad ownership is like acting surprised when a bear, tiger or other wild animal raised in captivity attacks. Some animals are just more dangerous than others.

P.S. Typing in all caps is the internet equivalent of yelling. Please, turn of your caps lock.

This is really terrifying. I do believe that their owners are being too ignorant when it comes to their dogs. They shouldn't let their pit bulls stay loose, now they have to suffer the consequences. I feel very sad for the lost of the poor Shih Tzu. The scene was very traumatic, it seems so clear in my mind as I read the article. I hope the families who were affected form this attack could move on. Thank you for sharing this information here on your site (jeffmilner.com). This could remind people to take extra precautions when they know their dogs are capable of doing this, or else, someone else's life might be at stake.

well pit bulls can be trained but its in their blod to attack.