Yesterday afternoon in the park, we helped celebrate our friend Thomas’s birthday with a potluck and games. I played some chess, had my hand injured in a slack-line tightening incident (I’m fine), didn’t come in dead last at croquet, and ate some of the best devilled eggs and broccoli salad I’ve ever had. By all accounts, it was already a great afternoon, but then something amazing happened.

Thomas pulled out a volleyball and together with five others of us armed with croquet mallets, we spontaneously created the new lawn game and soon to be sensation, “Malletball”.

It was amazing how simple and yet complex the game was from the start. We cordoned off a small section of the park, using croquet gates to mark goal posts. We felt that it would be too difficult to score if one could just block with his body, but what would be the punishment if you did block? I came up with the idea that it should be a point for the other team if the ball touches you and Thomas added then that it would be five points for a goal. So quick; so perfect.

Probably the most amazing part was that despite swinging mallets at each other nobody got hurt. As long as Matthew’s smashed thumb doesn’t count as somebody. There were a few near misses. One time I raised my mallet up over my head to stop a flying ball, the end of the mallet unscrewed and came tumbling down nearly grazing my head… resulting in the birth of the no high-sticking rule.

Some other interesting developments, Thomas invented a way to juggle the ball in the air, I created a fairly inspiring “behind the back” maneuver, not to mention the ways we learned to flip the ball up to a teammate to try and hit it at an unsuspecting opponent. (Though it is easier said than done).

The teams were very even. We decided to finish at 100 points, and the final tally was 100 – 94. I can’t wait to try it again, perhaps with hockey nets next time.

My friend Shannon Phillips is running for the Alberta NDP nomination for the Lethbridge West riding. I’ve put together a website to help get her message out. 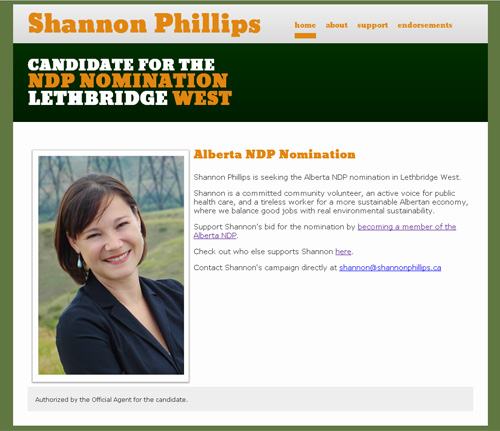 There are only a few people from my elementary school that I’m still in touch with. One of those people is Eric Bates.

I was friends with him all throughout elementary and high school. In particular, I remember playing around on 3D Studio and a very early version of Photoshop with him in Bobby Salmaso’s drafting class. We were also known to play a networked game of Doom during many lunch hours. He had some pretty advanced 3D modelling skills, even in those days, and I have always been a bit jealous of his talent.

Outside of school we worked on a project together to recreate a map of our high school on Duke Nukem 3D. His attention to detail and the way he constructed complex warping methods around the map to give the illusion of a multi-floored building blew me away. I think he liked my ample use of glass and the way one could simulate an experience of shooting out the windows next to the cafeteria. There was something cathartic about seeing all that shattered glass spray out on the floor.*

Eric and I are still in touch — though not very much now that he lives in Australia. He’s still animating and his latest piece, Sayonara was just featured on Cartoon Brew. Here it is:

Sayonara from Eric Bates on Vimeo.

A short story about two unlikely friends saying goodbye. A young man named Charles just lost his home. He spends one last day with his best friend, a sea turtle, before moving on.

This graduation project was made while at the Kyoto University of Art and Design. It brings together a lot of the research I had done over the three years I spent in Kyoto, and is based abstractly on my own experiences living in Japan. Most of the concepts relate somehow to my experiences, friends, foods, things I saw, and things I felt over this time; in particular the idea of saying goodbye to close friends.

He’s also created a making of video. Fantastic work, Eric. We always knew you were destined for greatness.

*It turns out, simulating shooting up a school in no way makes one actually want to shoot up a school — but if this had been a few years later, we probably would have been too worried about what others thought to make the map.

One of my good friends, David Logue, was on this week’s episode of Quirks and Quarks.

The interview is about cricket songs. We tested the H that aggressive signals mitigate the costs of fighting by muting and looking at a population that had lost its song. Turns out they fight like crazy if they can’t signal.

When crickets fight, there’s a lot of noise. Not just the clashing of mandibles and the clicking of legs, but the cricket equivalent of “trash talking” as well. Dr. David Logue, a biologist at the University of Puerto Rico and his colleagues from the University of Lethbridge in Alberta, were interested in what would happen when the crickets couldn’t make the sounds associated with their fights. What they saw was mayhem. Crickets, who were either naturally silent or had their noisemakers removed, fought viciously, longer, and more violently than those full of sound and fury. Apparently, these insects use bluster not to provoke, but to avoid violence.

My friend Dave has been entertaining his Facebook contacts with a NCAA style elimination tournament of the most essential food in the vegetable kingdom. Upstart Kitchen has put together a great blog post about the tournament. A friend of mine is interning at the Smithsonian Institute in Washington DC. She works next door to 1600 Pensylvania and though it’s only been a few days the interesting stories are already flowing:

“The street right outside of my workplace is closed off because [Prime Minister] Stephen Harper is coming to the White House. There was a little protest demanding that the US not buy dirty oil. Protestors wore costumes resembling dirty oil barrels and one person in particular was dressed like Chewbacca in a hockey jersey wearing a Harper mask. Is Harper, or are Canadians in general, known for their love of Star Wars?

My guess is he was trying to look like a sasquatch, or possibly it was just a long haired hippie protester that only looked like Chewbacca. Update: Now that I’ve seen the photo, I think the point of the furry custom was to say that Canada’s carbon footprint is LARGE like Bigfoot.

Over the weekend I went to my good friend Duane’s stag in Banff. We were lounging around in a bar sometime after midnight. My friend Niall was sitting beside me in a little love seat, in front of us sat a coffee table and on the other side two ladies were chatting with us. Out of the blue, one of them challenged Niall.

She declared, “I’ll betcha $20 that my friend here can beat you at an arm wrestle.”

I looked at Niall and then back at the girl—she was very tiny. I thought wow, this girl must be tremendously strong or have some kind of trick, because there’s no way she’s going to beat Niall, she’s just too small. He’s not a particularly big guy, but big enough. He’s about my height and weight, which lead me to ponder what this girl was thinking.

We moved some empties out of the way, they set up, a small crowd had gathered. It was over almost as quickly as it started.

Niall kind of shrugged and picked up his cash. I suggested to him that maybe they figured he would buy them some drinks and therefore they wouldn’t really be out any cash. Niall’s response was priceless.

“Fuck that. They can buy their own drinks.”