One of my favorite radio shows has been turned into a book. The Age of Persuasion: How Marketing Ate Our Culture is now available in book stores across Canada!

Authors Mike Tennant and Terry O’Reilly have known each other for about 20 years; they began their career together making radio shows in 1995 with O’Reilly on Advertising. They’ve followed that up with “The Age of Persuasion” and a book based on that show which hits bookstores today.

Last Tuesday I took advantage of an opportunity to talk on the phone with Terry and Mike about the show and their new book “The Age of Persuasion: How Marketing Ate Our Culture”. My questions are in bold text.

Terry: It’s certainly got the same tone of the show in the book, in a humorous way.

Mike: It’s the same speaking tone but we got to add an awful lot of stuff that we couldn’t fit in 27 minutes.

Terry: It gave us a chance to explore some material that we always wanted to explore. If you flip through the book, it has all kinds of pullouts and asides, it’s just as fun and kooky as the show.

Terry: We are at a point where on a given day a person is exposed to hundreds or thousands of advertisements. There are ads on gas pumps, hockey boards, baseball bases, sidewalks, lawns, and even beach sand. There is absolutely no aspect in 21st century life where you can separate life from modern advertisements.

Mike: When you turn this out to consumers, kids learn to speak the language fluently. That’s why people dress and talk a certain way. It’s the way people present themselves, they have grown up in a world of marketing.

Terry: Even our language has been influenced by marketing. For example with real estate: You live a home not a house, a country kitchen means a certain thing and a chiefs kitchen another. It’s all marketing-ease that we use in common place language.

Years ago a size 10 changed to a size 8. Each year the numbers get smaller, pretty soon they’re going to go into negative number. The idea is, if you find yourself in a size zero dress you feel slimmer.

Terry: In the book, we present a hypothetical, what would happen if you hopped in a cab and tried to run away from advertising. It’s pretty hard, ads are everywhere, you could drive around all day and trying to avoid it but it’s everywhere, and at the end of the day when you arrive at the beach even the sand on the shore has advertisements. Ads are everywhere. They even have ads on condoms now.

Mike: We don’t how long the ads are… (after a dramatic pause he adds), how wordy.

Terry: I don’t know if you can avoid it—maybe in a rainforrest.

Mike: But we don’t think of advertising as the big bad specter. We know how much power we do or do not have. An educated consumer can pick and choose which are worthwhile and which are skaliwags.

Terry: We have a very selfish motive, we want to teach people to calibrate themselves to respond. Our hope is that people will understand the difference between great ads and the not so great ads. It’s selfish in the sense that when that starts to happen, people will come to us for better advertisements.

Terry: Our assumption is that people look at advertising as manipulation. Advertising is said to affect the brain in ways that people can’t control. In reality it’s a nudge at people to have them look at things in a positive light. Over 20 or 30 years they’ve developed a relationship with a particular brand and that means something.

Mike: Before every chapter, there is a myth that we address. People think all advertising is in collusion that “They” meet and are working together. The truth is, there is no “They”.

Terry: Some will say, “This ad doesn’t work because I don’t remember the name of the product.” What happens there is you love the ad and 3 months later when you’re buying the product, you’ll look at the wall of dish washing soap and you will probably have some feelings toward the product if you liked the ad.

You talk about subliminal messages in ads not working, is that what you’re talking about here?

Terry: Subliminal suggests some kind of trick. That really truly doesn’t exist. Nobody puts that kind of message in the ad, what I’m suggesting is that if you have a message in the ad the people like, they’ll have some affinity to the product.

Mike: Advertising is never a science but rather an art. From our mistakes we’ve learned many directions not to go. It’s an intuitive process. There are no solid set in stone rules, or paint by number. There is no diabolical witchcraft at work, just people tyring to wrap the best message around a product.

Terry: Batting .300 is huge in baseball, sometimes you are so right and sometimes you are so wrong. An advertiser might think his ad is so flawed because it got changed so much during the approval process, but you don’t know. It can turn around and be so successful they can’t keep product on the shelf.

An advertiser might not know how successful a specific ad will be, but at the end of the day, the advertising agencies that have the highest average, will be the ones that everyone wants to work on their project.

Terry: It is an ironic part of our business—we create so much clutter and then spend all of our waking hours working through the problem that we create. I don’t know that people would do less advertising if there were tax regulations. People’s need for marketing would not be reduced because of the expense. There is a sense that you’ve simply got to get your message out.

Guerrilla marketing, can be, creative clutter — it adds to clutter, it eats up another couple meters on the sidewalk with advertising, but if the idea is awesome I’ll admire the hell out of it.

Mike: If people suddenly found they didn’t have tax reductions, you’d see more guerrilla marketing, less tv, radio, or traditional advertising. The amount of clutter wouldn’t go down. Guerrilla marketing levels the playing field but it has to be good, that gets us into “Breaking the Contract”.

Mike: Don’t buy from them. Really. If someone is breaking the contract, the most powerful response is with their wallet. Don’t patronize the company. Telemarketers interupt your meal and offer only a sales pitch in return. The easiest way to put a stop to it is taking your patronage away.

Terry: Times Square which is so filled with advertising, it’s a symbolic representation of New York’s financial and entertainment status in the world. They’ve actually created a law that every building in Times Square has to have a sign.

Mike: Yonge-Dundas Square in downtown Toronto transformed itself to be a mini Times square. They’ve reworked that intersection, it’s trying to say the same thing as New York about it’s dominance as an entertainment centre.

Terry: Too many ads without a symbolic relationship doesn’t work, it just seems like clutter. Certain places just have that symbolism. Consider the attacks in New York City and the symbolic nature of the World Trade Centre. They were trying to destroy a brand.

Terry: I sure as hell hope not. I don’t know how effective [the Do Not Call List] is, I know that there are so many loopholes. Any merchant that has your personal information, any pollster, any politcal party, there are so many exemptions it’s like a peice of swiss cheese.

The international question is interesting because there really is nothing to stop off shore businesses from calling. Then the telemarketers can turn around and say they’re losing business to oversea markets.

Terry: Once they’ve been made cinematic, if you are truly creating work for cinima it’s like a small film, there is much less voiceover on a cinematic ad than a TV, I think you could probably reconstitute it on TV, but it might not fit. Usually we’ll mix it in both surround and stereo, but depending on the application somehow it might not seem right.

Mike: It’s like a print ad on radio. The message needs to match the medium.

Terry: Matching the ad with format says a lot about the brand, how willing are they to do it right shows what kind of a company they are and how they feel about their customers.

Terry: One theme we talk about in the book, is how big marketers understand nuance, the personal touch. The really smart big marketers personalize and humanize, when selling a car some companies forget that and let their message become dehumanized. There is a great lesson when the regular guy doesn’t want to be the big marketing guy. It’s easier when you are a small shop — it’s easy to give personalized attention than if you are IBM.

A big thing is if you have a live person answer the phone. How many CEO’s have called their own company and listened to what everyone else goes through when they call. Every touchpoint should be creative. When you put them on hold, what’s the message? Rather than just muzak, every aspect should be creative. The company that does that deserves to succeed.

Terry: I love that show, by the way. It’s a great moment in time in the history of advertising. 1963 — Dual Dane Burnback is about to alter the way advertising is considered. Even at the ad firm on Mad Men there is only one art director and five copy writers. When Dual Dane and Burnback came on the scene, they changed everything.

But as for how they treat women, I don’t know, I’ve talked with Bob Levinson about that. He was a functioning creative director at the time and he doesn’t think it is accurate at all, but his work environment might have been different. He worked at Dual Dane Burnback not at Sterling Cooper.

One of biggest parts of the business is to be able to sell an idea in the boardroom and Draper is great at that. They’ve done their homework. Mad men, I feel is pretty roughly accurate on the dynamics of it.

Mike: And the drinking and smoking. (laughing) It’s very rare for Terry to be 2 or 3 drinks to the wind by the end of the morning.

Terry: I went out looking for the best and found Mike. He won’t admit it but he’s one of the great radio writers in this country.

Mike: I was the ad columnist on Definitely Not the Opera. The long story short, Terry and I and two other radio writers, would get together for lunch. Terry was giving great seminars on advertising, and we thought it would be great as a radio broadcast. I had the connection with CBC which lead to the show and eventually led to the book.

Terry: The CBC show is interesting. It’s kind of an advertising free sanctuary to the general public. When we first started the show, we braced ourselves for a blow back from the public but instead people were really kind. They were interested in learning about advertising. Who knew? (they laugh) They’ve stayed with us and every season we’ve had more and more listeners. It’s been quite a remarkable ride for us.

Terry will be in Calgary this weekend on the book tour. You can find him at the bookstore Pages for a reading / signing of the book on Sunday, November 1st from 11:00am to 1:00pm. More details here.

If you’re in the Toronto area, Both Terry and Mike will be at the Metro Toronto Reference Library for a reading on Thursday November 5th, at 7pm and stay for book signings. Copies will be available for sale. 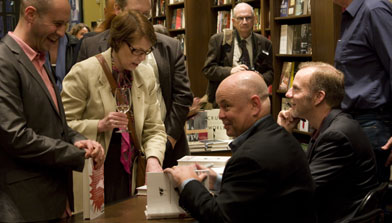 One reply on “The Age of Persuasion: How Marketing Ate Our Culture”