Chris Martin and Mick Dawson set off in a 23ft long and 6ft wide boat from Choshi, Japan on Friday 8th May 2009 and arrived in the San Francisco Bay under the Golden Gate Bridge last Friday 13th November 2009 becoming the first crew to row unsupported across the North Pacific Ocean. 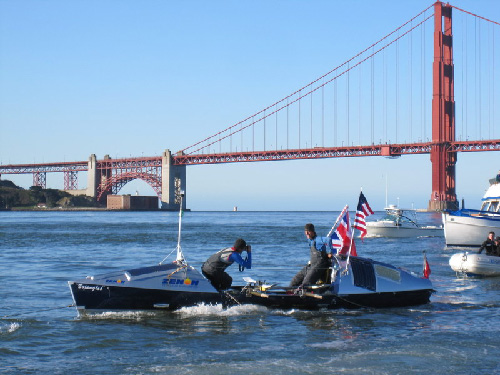 Chris and Mick photograph their historic entrance into the San Francisco Bay.

Within seconds I looked up and saw the underside of the bridge. A shotgun sounded off to our left indicating that we had made it. We had rowed across the North Pacific Ocean. After over half a year of giving everything we had to the ocean and this breathtaking, life changing an historic moment was our most welcome reward. I looked round at Mick who held out his hand which I gladly shook. The rest of the trip into land was a bit surreal.

Check out the video that Mick produced in preparation for his attempt:

They kept a blog of their daily progress at http://www.goldengateendeavour.com/.