This summer my family is holding their once-every-five-year reunion out near Mountain View, just on the eastern cusp of the Rocky Mountains. One of the things we’ll be doing is rocking out with a music jam. Not everyone in my family plays an instrument, so I suggested that those not playing should bring their air guitars. I figured just about everyone can play the air guitar, but it wasn’t until I saw the documentary, “Air Guitar Nation” did I truly know the depth and potential of the invisible instrument.

AIR GUITAR NATION is the feature documentary about the year that air guitar swept America – from New York to Los Angeles and then all the way to northern Finland. AIR GUITAR NATION chronicles the birth of the US Air Guitar Championships and the personal journeys of those talented contestants who are vying to become the first World Air Guitar Champion from the United States. Every August, the Air Guitar World Championships bring thousands of fans all the way to Oulu, Finland to see the world’s best air guitarists battle it out for 60 seconds of mock stardom. For years, the USA was missing in action. Enter the first official US Air Guitar Championships. What starts as a friendly contest above a New York strip club becomes a battle of naked ambition played out on the national and, ultimately, the world stage.

Here is a short clip from the movie, please enjoy as C. Diddy gives the most amazing air guitar performance you’ve ever seen:

What would you do first with the ability to travel through time? Desmond Warzel shares some clever writing, with Wikihistory, a message board by time travellers.

At 18:06:59, BigChill wrote:
Take it easy on the kid, SilverFox316; everybody kills Hitler on their first trip. I did. It always gets fixed within a few minutes, what’s the harm?

At 18:33:10, SilverFox316 wrote:
Easy for you to say, BigChill, since to my recollection you’ve never volunteered to go back and fix it. You think I’ve got nothing better to do?

For best results, view at around midnight just after getting home from the first night of a weekend long stag party—otherwise your mileage may vary.

Good night; have a good weekend. I’m going to Fernie first thing in the morning.

I sure wish I had come up with this idea myself, because it makes my mouth water just thinking about it. Bacon cups (with step-by-step instructions). 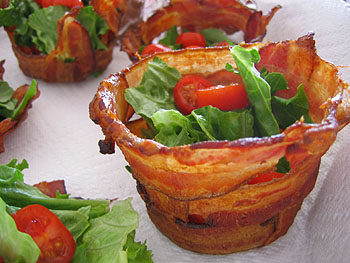 Also bacon related and VERY funny, Jim Gaffigan on the tastiest food in the world.

Song Chart Meme is a series of charts that break down pop songs in graphic form.

Admittedly some of these go over my head, but others are very good.

There are a myriad of reasons to NOT vote for the Progressive Conservative party in the upcoming provincial election but this one in particular makes me chuckle: 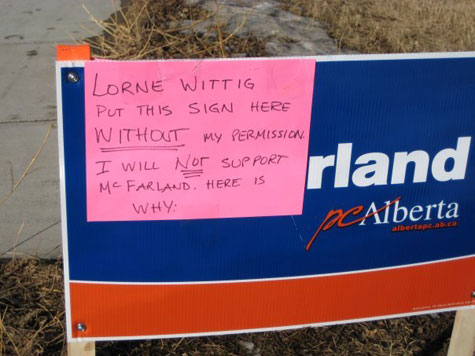 Remember that on March 3rd, Alberta needs a new government.

I just came across this clip of Patrick Stewart on The Extras. This is an old one that you may have seen before, but it’s a classic.

Back in January 2001 The Onion satirically told us Bush’s plan to end the US’s “Long National Nightmare Of Peace And Prosperity”. It’s scary how accurate they were.

“My fellow Americans,” Bush said, “at long last, we have reached the end of the dark period in American history that will come to be known as the Clinton Era, eight long years characterized by unprecedented economic expansion, a sharp decrease in crime, and sustained peace overseas. The time has come to put all of that behind us.”