In this month’s issue of The New Yorker, Steve Martin has launched a biting satirical attack on Mel Gibson, mocking The Passion of the Christ as money-making showbusiness and suggesting it should have been called Lethal Passion.

Here are some of the comments his movie-producer character, Stan, makes in the article:

An Open Letter
By John Moe

TO: THE GRINCH
FROM: MAX YOUR FORMER FRIEND AND DOG

Dear Steven,
It’s been several months now since you left and I remained here on Mt. Crumpet in the home we built together. I think it’s important that I share my feelings. I hate you Steven. Hate; hate; hate you.

For years we stood for something. We hated the Whos. Like we always said if it weren’t for Christmas and the Who’s infernal screeching of “carols”, we would have had absolute quiet all year long and isn’t that why we moved to Mt. Crumpet in the first place, Steven? Every December our meditation, gardening and literary work were shattered with “Wahoo-Boraice” or whatever that stupid song was. Have you learned it yet? Well have you? The Whos ruined our lives. Annually. And then you joined them. And why? WHY?! Because you heard them sing. Who was I living with all those years? Honestly, if you know, tell me Steven.

And, by the way, there was nothing wrong with your heart. I have, in our big file cabinet, a report from the Dr. that says while your heart was abnormally small (5th percentile), it was completely functional and unless you attempt to run a triathlon, you’re fine. And all that aside, your heart has nothing to do with your emotions. You left your Zoloft here, by the way. If you haven’t picked up a new prescription, I will send it down to you but you should really renew it.

Alone up here on Mt. Crumpet my thoughts have turned to that night. In retrospect, there were many mistakes. You shouldn’t have worn a Santa suit. Also you should not have engaged Cindy Lou Who — at all. I’m not sure what inverted Stockholm syndrome took place while I waited on the roof, but I do know that it all could have been solved with a hard shove and a quick exit. Additionally we should have stashed the Christmas crap and then left town right away … the shore, Cozumel, my parents’ place even.

But really the problem was the Whos. They’re stupid, Steven. People who get robbed and then sing with joy are stupid people. And now you’ve gone to live with them, in a ̬ what? Hut? — I can’t blame them anymore for being who they are. Perhaps I can’t even blame you for being who you evidently were all along. Perhaps I can only blame myself for seeing you as the one I spent all those years with. The one I thought shared my yearning for solitude and my deep and justified hatred for everyone else. But that was not you. You are a Who. Enjoy the roast beast. Whatever. Jerk.

(Excerpt from Dear Luke, We Need to Talk, Dad Darth: And Other Pop Culture Correspondences)

In an effort to educate the masses via easily drawn stick figures my friend Gavin has put together a quick step-by-step explanation of how indie films are made. New Media students and Drama geeks alike — take note. 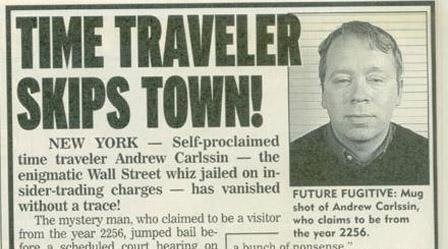 Conspiracy theories aside, here is an email I got today. I realize it’s just a silly forward, but it made me laugh.

YOU KNOW YOU’RE TRAILER TRASH WHEN:

Nothing funny or amusing to report today. So instead of a funny or even slightly amusing story, I’ll relate the lame pun I heard on CBC Radio last night while driving home to lethbridge:

“[With increasing threats from George W. to Saddam Hussien Canada is left between Iraq and a hard place.]”