It’s been a dangerous summer for boaters in Alberta. There have been 6 drownings in the last six weeks, and one that hits somewhat close to home. Linda Englehart, a Calgary kayaker who paddled Southern Alberta rivers and with the ORCKA club died Monday following a mishap on the Kicking Horse on Saturday.

I have never paddled with Linda, but she did communicate with the ORCKA club on their website and had planned at one point to join us on the trip we took down Box Canyon last month.

More details about the tragic loss from the ORCKA website.

I ended my week on such a high note I can hardly believe it. To keep this interesting to the casual reader, I’ll try and keep this short.

Spending some time with my kid sister and her two kids was fantastic. I really can’t get enough of her kids. Her 18 month toddler is just so much fun, and I’ve never had so much time to spend with a newborn—yes I even changed diapers and it wasn’t nearly as bad as I was led to believe. Of course, I never had to change any seriously smelly ones. Oh man that kid does drop the occasional bomb in which hazmat suits would be ideal.

Then yesterday I had a good time hanging with one of my best friends in Lethbridge and her mom—which was totally nice if uneventful. However today was even more excellent than any day of the previous week.

It started out as one of those bland Saturday’s where even though the weather is nice, the lawn needed to be mowed, the laundry to be done, repairs made on the damage that my psycho roommate inflicted upon the house while I was gone (that’s one I’ll save for a different post), and it didn’t look like I had much on my plate that I was interested in actually doing.

But then, by the glorious miracle of the Internet, I found a group of guys that had blogged about going kayaking in less than an hour; all I had to do was show up with a boat on my Jeep.

We hit the lower St. Mary’s river which I had never been down before. Pictured below is a one of the guys that went with us and a bunch of Calgary folks’ vehicles and boats—we were all getting ready to hit the water. 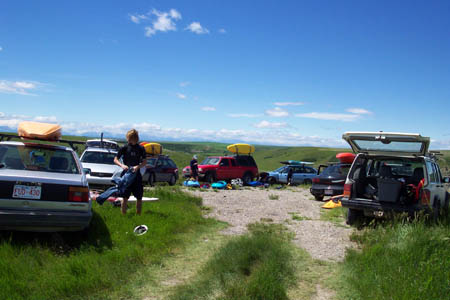 The thing is, there has been a lot of rain in the last week. Apparently it rained pretty much everyday while I was gone to visit my sister. Well with lots of rain comes a high river and let me just say, wow that river was flowing! I was getting pretty confident going down it though and noticed that the other guys were all pulling off to the side, but thought, oh well I’ll just go down a bit further and pull off after a few of these big waves.

Well HELLO, the waves kept coming bigger and bigger, until I noticed that the whole river was raging around me. I found out later this was probably in the area of class four rapids. The best thing to do in a time like that is just go for it—which I did; which was awesome! I got right through them without even flipping and then parked in the eddie like a pro. The other guys were mighty impressed. Two of them followed my path and the other two opted to walk around these particular rapids.

Later one of the guys lost his boat—which looking at it now is kind of funny but I was quite worried at the time. The two more experienced boaters wanted these other two guys to come over to the shore with us so we could check out the hole around the next bend. Well I think they might have scared him slightly because while crossing he was a little unstable and then dumped. Well knowing he was in trouble he quickly bailed and didn’t even hang onto his boat. I went after him—again charging into the great unknown but at least the other guys told me to keep left. I went down this even bigger set of rapids, but this time a little less gracefully (I did it upside down)—depending on how you think about it perhaps I should get extra points for style. Luckily I flipped myself back up (after several tries) and we found his boat circling in a nearby eddie.

So to treat myself for my hard work today I made myself what I consider a perfect supper fit for a king and watched the Oilers shut-out the Hurricanes 4 to nothing, sending them to game 7 of the Stanley Cup finals and giving me the perfect ending to a perfect week. My brother scanned some old photos he took of me kayaking down the Kananaskis white water and posted them on Flickr. I’m still cold.

Anna-Maria went to Banff again this weekend. I went to Devin Wallace’s bachelor party and played 16 player network Halo until 3 in the morning. Since none of them drink they weren’t getting any worse as the night progressed, but I can’t complain because I did pretty good anyway.

Yesterday I went kayaking down the Milk River. I also discovered that I can drive my Jeep for about at least 100km on the highway after the fuel light is on. I thought for sure I would run out of gas; I didn’t though.

So this brings me to Sunday. So far today I’ve watched a couple episodes of the Sopranos (season five is very good by the way) and I also did a couple of photoshop tutorials. Now I’m thinking about mowing the lawn. Yes, when Anna goes away, I live the crazy life.

The Milner cousins and I went kayaking down the Belly River again this weekend. The water has settled at a bearable temperature and the weather couldn’t have cooperated with us better today.

As we were floating down the river we saw a gaggle of 5 teenage girls gathered around the river bank, but all looking at something and all of them oblivious to our presence. Corry said, “Hi.” And they all jumped individually as they spun around and saw us drifting by. We chatted with them for a minute. The girls were visiting their grandparents for the holiday weekend. It turns out they were inspecting a cow’s skull they had found in the mud.

When I got back to my jeep I discovered bird droppings inside my car. How improbable is that? I’m guessing that when I left the door open to get my gear together that a bird let one fall at such an angle to precisely miss my seat and hit the arm rest. If they could only bomb that accurately in Iraq…

The video Aaron took of me last time is online. The water was higher today, but the video gives you a pretty good idea of what it was like today.

The picture below was not from today, but it was taken on the same river I was kayaking down today. 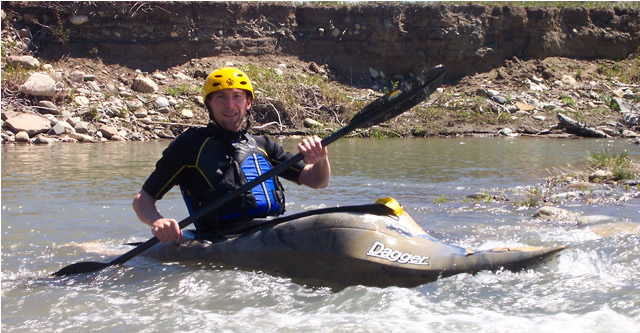 The water was cold, ice cold. The kind of cold that hurts your hands when you put them even near the ice cold iciness that is the Belly River. It makes sense that the water is chilly because it’s coming directly from the melting snow up in the Rocky Mountains about a half hour drive from where we put in.

The water level wasn’t as high as it could have been, but there were still plenty of good features. On about the third really big hole I got stuck for a moment while the water thrashed me about like a rag doll. The water is tricky like that, it pulled me in gently then whipped me around quickly wrapping my head on the large rocks below. This is the first time I’ve ever had my helmet save me from serious head injury but, oh my, I certainly felt happy to have it. I came away with a small headache. The helmet came away with its shiny yellow finish marred in several places with large white scratches.

The incident wasn’t actually that much of an incident and we had a great time the rest of the afternoon. We just cruised down that cold, cold river, playing in the waves, and having a blast. My cousin made some short movie clips of us on his digital camera. I’ll post them when I get them.