As I’ve mentioned previously, This American Life has been presenting an ongoing series about the financial crisis and the economy. Below is a list of the relevant entries so far. I recommend you listen to them all.

A couple of months ago, This American Life aired an episode of their show called superpowers. The part of the episode that stuck with me the most was John Hodgman’s discussion of which superpower is better: flight or invisibility?

When the time is right, (and it’s almost never easy to tell), I’ve taken to asking groups of my friends which they would choose: the ability to fly — Superman style — or the power to turn oneself completely invisible at will. Which choice would you make?

As per Mr. Hodgman’s clarifications, the ability to fly wouldn’t mean you weren’t any stronger than you are now nor would you have faster reflexes or a special resistance to the cold. The maximum flying speed would be 1000mph but you’d still need to stay within the atmosphere if you wanted to breath.

Invisibility came with it’s own set of caveats. One would vanish with his clothes but any non-clothing items would remain visible. (I think it’s safe to assume items in your pockets would disappear too, but I don’t think he specified). It would last as long as you wanted and could be turned on and off just by thinking about it.

I’ve found the varied responses to this question very interesting. The number of people that choose invisibility surprises me. To me, the huge list of things that could be done as someone that could fly would far outweigh the chance to sneak into a few restricted places or the ‘thrill’ of shoplifting thousands of dollars worth of clothing before you got bored with the idea. Sure you might be able to hunt down Bin Laden, but you’d still have to actually go to the Middle East and start looking. Are you really going turn yourself into “Dog” the Bounty hunter? Perhaps you are. Still it seems like a choice for invisibility says, “I’m the type of person that wants to get away with doing something illegal.”

On the other hand, choosing the gift of flight says, “I want go places and I want to do it in style!”

If I could fly, this is what I’d do: I’d officially be done with the ridiculous 40 below zero weather that we put up with in Southern Alberta every winter. That doesn’t mean I would leave Canada for good — after all, I do love it here — however, it wouldn’t take me long to discover that rather than waiting for the next chinook, the two hour jump to southern California is totally worth it.

I would certainly make “flight” a part of my living and at the same time I’d travel the world in a way few have ever even considered. With the power of flight, I’d be a hero everywhere I went and as far as fame and fortune go, I have to admit, I would eat it up.

I suppose the possibility of unlimited free travel by plane would be there for those that choose invisibility but you’d still have to find a place to sit on any fully booked flights.

So, in answer to the question which is better: it’s flight all the way.

If you missed the first episode of This American Life on Showtime last night, you can catch it online on Showtimes website. Or if you’re in a country other than the US of A, you’ll have good luck with a bittorrent search. I just finished watching it, and it really is as good as the radio version.

Also of interest, the This American Life Parody. 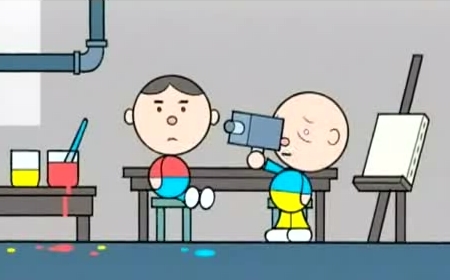 You’ve got to see this Chris Ware animation set to an intriguing This American Life tale about how being behind the camera can change you.

This American Life, one of my most favourite podcasts/radio-shows is coming to television.

What would a TV version of This American Life look like? And is making one even a good idea? Believe us, we’ve wondered all of that ourselves. But now we’re done, and we’re super excited. Our first season of half-hour episodes debuts March 22nd on Showtime. We wanted to make a TV show that feels like the radio show, but isn’t just the radio show on TV. Take a look and see what you think. Here’s a trailer we created for public radio station websites, just like this one.

Check out the teaser trailer.

And here’s an interview with Ira Glass about the new show on NPR’s Fresh Air.

I recently subscribed to the This American Life podcast and I love it. They just started offering their show as a free podcast this week and I’m so glad they did; consider me hooked.

A quick description of their show for those that have never heard of it:

One of the problems with our show from the start has been that whenever we try to describe it in a sentence or two, it sounds awful. For instance: Each week we choose a theme and put together different kinds of stories on that theme. That doesn’t sound like something we’d want to listen to on the radio, and it’s our show. In the early days of the program, in frustration, we’d sometimes tell public radio program directors that it’s basically just like Car Talk. Except just one guy hosting. And no cars.

It’s easy to say what we’re not. We’re not a news show or a talk show or a call-in show. We’re not really formatted like other radio shows at all.

Instead, we do these stories that are like movies for radio. There are people in dramatic situations where things happen to them.

There are funny moments and emotional moments and—hopefully—moments where the people in the story say interesting, surprising things about it all. It has to be surprising. It has to be fun. There are shows on public radio with no sense of fun or surprise and we hate those shows.