In addition to running very slowly, lately I’ve been getting some unexplained popups on my computer. They’re very strange, sometimes appearing with the Internet Explorer logo (which I don’t use except for updating windows).

Some of the popups have the Firefox logo but then have an Internet Explorer error message. Some other of the pop-ups are coming up as error 404 but that is likely because of my hosts file. (If you don’t have a modified hosts file, I highly recommend you get this one. (instructions)

I ran a scan using Hijackthis and found, what I think are, suspicious .dll files in the windows/system32 folder:

I don’t know what these files do and the limited search results aren’t helping. I’m posting this here with the hope that someone else may shed some light on the situation.

As sad as this is to admit, it appears there is a folder or 5 on my site that have been sending out some kind of pharmaceutical spam. I guess this is just a lesson that when working with plugins that I’m not too sure about, I need to be extra careful.

The files in question have also written special permissions to themselves making it difficult to just erase them. I’ve contacted my hosting provider and hopefully I will have things sorted out soon.

Some of the names of the noxious files in question include:

The interesting thing I found when searching for information about my situation, there appears to be a lot of other sites that also have these malicious php files on their servers and I assume they have no idea about it either—including, and this surprised me the most, many Universities’ sites.

If anyone has any more light they can shed on this, please let me know.

Update: At my request, my hosting provider has blown away the affected directories.

Using supercomputers to respond to a potential American health emergency, scientists from Los Alamos National Laboratory in New Mexico, the University of Washington and the Fred Hutchinson Cancer Research Center in Seattle have developed a simulation model that makes stark predictions about the possible future course of an avian influenza pandemic. 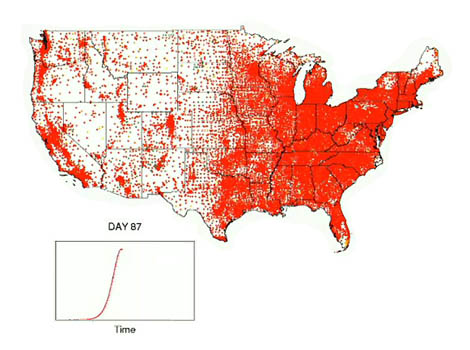 Based on today’s environment of world-wide connectivity, beginning with 10 infected people arriving in Los Angeles, the simulation predicts that the pandemic will spread quickly throughout the continental United States, peaking about 90 days after the initial introduction.

The computer simulation models a synthetic population that matches U.S. census demographics and worker mobility data by randomly assigning the simulated individuals to households, workplaces, schools, and the like. Department of Transportation travel data is used to model long-distance trips during the course of the simulation, realistically capturing the spread of the pandemic virus by airplane and other passenger travel across the United States.

“In the highly mobile U.S. population, travel restrictions alone will not be enough to stop the spread; a mixture of many mitigation strategies is more likely to be effective than a few strictly enforced ones,” said Kadau, also of Los Alamos’ Theoretical Division.