An article in the Boston Globe published today highlighted my backmasking page.

Remember that guy in high school who was always trying to tell you about the satanic messages hidden in “Stairway to Heaven” by Led Zeppelin (below) if you played it backward? Turns out he was right. Or so says Jeff Milner, a graphic designer from Alberta, Canada, who has not only posted snippets of the song, and several others, in reverse, but also transcribed the alleged backward lyrics. His findings: “If there’s a bustle in your hedgerow don’t be alarmed now, it’s just a spring clean for the May queen” translates to “Oh here’s to my sweet Satan. The one whose little path would make me sad, whose power is Satan.” The message is surprisingly clear on “Stairway,” but less so on songs like “Baby One More Time.”

About a year ago a producer from Fox 8 News emailed me and asked if I would be in Los Angeles anytime in the near future or if I knew of any backmasking experts that could help them do a report. I never heard back from them, and no, I never made the trip, but it looks like they found someone because here is their segment on backmasking. 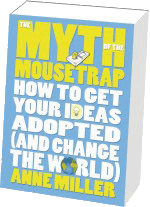 A couple of days ago I got a nice email from an author in the UK by the name of Anne Miller.

She wrote to let me know she had mentioned my website in her new book and to tell me a little something about it.

It sounds interesting, and I’m flattered to have been included.

Here’s what she wrote:

I’m referencing your backmasking site in my book The Myth of the Mousetrap: how to get your ideas adopted (and change the world), as a excellent example of the way that we force fit things to fit with what we expect. This is one of the reasons why, when you tell people your brilliant idea, they ignore it, saying things like “we tried that years ago and it didn’t work” or “thats just like my idea”.

The book was published a couple of weeks ago by Cyan/Marshall Cavendish and is available in UK, N America and Australasia.

One Red Paperclip is a site about one man’s successful attempt at trading one red paperclip for something bigger and better until, 14 trades later, he had a house. File under, “why didn’t I think of that?”

Coincidentally, because of the One Red Paperclip guy’s challenge to CBC’s The Hour, the show went to Yahk, BC and on the way they did a couple of shows in Calgary. It was one of those Calgary episodes that I was on. 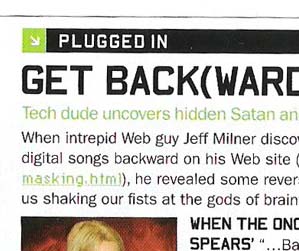 Thanks to astute reader Matt Halbig for pointing out that my backmasking website is mentioned in the May 2006 issue of Stuff Magazine.

Find the column on page 40 in the magazine or see the full scanned clip.

I’m going to be doing a television interview this Wednesday which will air during a live taping of CBC Newsworld’s The Hour on either February 6th or 7th.

Update: It looks like it’s going to air on Tuesday at 8:00pm MST on Newsworld.

I had a great time interviewing on The Jay Thomas Show this afternoon. For those of you that caught the show and came here looking for some more samples of backmasking, here is my backmasking page. 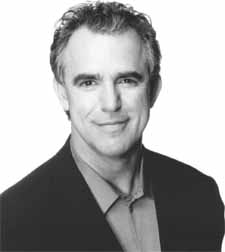 Yesterday I received a copy of the Wall Street Journal that the reporter, Dionne Searcey, had told me she would send. (Thanks Dionne).

The wood print looks great! Here it is, scanned and enlarged. Click for an even bigger version.

I’ll be on 700WLW in Cincinnati tonight at 8:00pm (MST) doing an interview about my backmasking page.

I think a large part of what makes backmasking so interesting is that it strikes people on so many different levels. First off, with relation to religion, when people hear that popular music might contain messages about Satan, they really want to listen and decide for themselves. Even if people are not religious, there is still a natural curiosity to hear what all the fuss is about. It’s compelling to feel like we have discovered a secret about something so prominent in popular culture. We know Paul is not dead, yet we are interested to learn all the clues about his untimely demise.

I’ve made my views fairly clear that I don’t think the “satanic lyrics” are (for the most part) intentional. Most people that I have shown the Stairway to Heaven clip can’t even hear the messages the first time they listen. This brings up another interesting aspect of this story. People are fascinated by the psychology at work here. It is amazing how the power of suggestion can transform your interpretation of what at first registers as reversed gibberish into a coherent message.