I love this eight-and-a-half minute infomercial about the making of Snow White. This clip illustrates the process from start to finish.

It turns out, the secret to making good cartoons is directly proportional to how many pretty girls you have inking the cells.

Who is the most hated family in America? Well it might just be the Fred Phelps family. As a result of their extremist family religion preaching hatred and intolerance, protesting at the funerals of US soldiers killed in Iraq, and being all around not nice people, nobody seems to like them.

Louis Theroux of the BBC presents the documentary “The Most Hated Family in America” (Wikipedia link).

Fantastic Louis Theroux documentary about homophobic, anti-semitic religious lunatics (Fred Phelps’ Westboro Baptist Church) in the USA. Originally aired on BBC2 (UK). If you can look past the epithets without being offended, it’s a laugh riot. Fred Phelps comes across as REALLY stupid!

In the “History of Disbelief”, Jonathan Miller goes on a journey exploring the origins of his own lack of belief and uncovering the hidden story of atheism. From the BBC here are all three parts:

The history of disbelief continues with the ideas of self-taught philosopher Thomas Paine, the revolutionary studies of geology and the evolutionary theories of Darwin. Jonathan Miller looks at the Freudian view that religion is a “thought disorder”. He also examines his motivation behind making the series touching on the issues of death and the religious fanaticism of the 21st century.

It’s hard to believe that the Nintendo Entertainment System was released 21 years ago. Last year, GameSpot sponsored a documentary celebrating the early years of Nintendo.

I particularly enjoyed the demonstrations of how to make your Nintendo cartridges run. I recall that for the first few years of Nintendo playing at our house we never had to blow on the games, I guess it was only in the later years (early 90’s) when games weren’t babied so much that dust was allowed to collect on the exposed circuit boards, and the ritual of blowing on games before you loaded them began.

Here it is, Flashback NES:

Ira Glass bequeaths the tricks of the trade in four YouTube videos that are extremely interesting, whether or not your are in the publishing/podcasting/video making business.

… It is your job to be kind of ruthless and to understand that either you don’t have a sequence of actions — you don’t have the story part that works or you don’t have a moment of reflection that works and you’re going to need both, and in a good story you’re gonna flip back and forth between the two like to be a little bit of action and someone will say something about it and then a little more action and someone will say something and it and that’s really like a lot of the trick of the whole thing you know is to have the perseverance that if you’ve got an interesting anecdote that you also uh… can end up with an interesting moment of reflection that will support it and then the two together interwoven into three minutes or six minutes or however long your story is will make something that’s larger than the sum of its parts.

The creators of the TV show Lost are often filling the shows with clues for the audience to figure out what the show is all about. I’ve never been able to follow the show—I guess that’s what happens if you try to jump in halfway through a season—but fans of the show may find this interesting.

In the scene where Karl is strapped to a chair in Room 23, there is a backwards message embedded in the audio. It’s pretty clear (at least in the reversed clip) and the person/people that made the clip wrote what it is your going to hear on the top of the clip, so no sense in saving it until after you’ve watched the video; the message, spoken by a woman, repeats the phrase, “Only fools are enslaved by time and space”.

Here is the scene forward and reverse:

And here is the same scene reversed with subtitle prompts:

I can’t vouch for the fact that the audio hasn’t been adjusted in any extra way (besides reversal).

Update: I checked the audio myself and it appears to be a legitimate reversal, though the audio was more clear in this version than in the version I flipped myself, but it was still there. (link to lost-s03e07-reversed-clip.mp3)

I came across a video clip of a preacher speaking out against the Hip Hop artist Jay-Z. Proponents of the evils of backmasking, like this preacher, argue that the effects of listening to music with backward messages are manifested in an unconscious manner on the listener’s subsequent behaviour.

the heavy metal folks used to do that and they would put the backwards masked messages in your music and they’d say that your subconscious is smart enough—that right brain was smart enough to decode and flip that message so by the time it got to your left brain you understood it and you didn’t even know you understood it. You just acted it out. Because they have the song called Another One Bites the Dust — Queen. Played it backwards it said, I like to smoke marijuana. Yeah, and then they interviewed kids and kids say when they listen to it they just wanna get high, they just want to smoke weed and they had no idea that that message was being reversed in their mind and causing them to want to do that.”

I’d like to point out that contrary to this preacher’s claims, studies have shown that it is, in fact, impossible for the subconscious mind to “decode and flip that message”.

The proponents of backmasking argue that the effects of greatest concern are not the consciously perceived meanings of backward messages but rather those effects arising from unconscious or subliminal apprehension of the (forward) meaning of the material. Consequently, we also used tasks that required less in the way of conscious apprehension of meaning. We reasoned that if some subconscious mechanism existed for the interpretation of backward messages and their influence upon behaviour, then this mechanism should allow decisions to be made about content without necessarily revealing that content.

Upon the completion of their experiments Vokey and Read concluded, “we could find no evidence that our listeners were influenced, consciously or unconsciously, by the content of backward messages.”

I’m not one to deny that it does SOUND like Jay-Z has an anti-religious message in the reverse clip. It’s my belief that if such a message is intentional, its purpose is to gain publicity for his album. By pointing it out, this video has actually done a favour for Jay-Z. The prudent thing to do would be to ignore such obvious attention grabbing tactics. Nevertheless preachers like this one continue to disseminate the false claim that backwards messages within music can influence those listening. I think it’s because that message draws big crowds and allows the preachers to more easily sell copies of their sermons on DVDs.

Today after work I created this little clip (3.5 mb Quicktime) of Anna-Maria chasing me through the backyard.

The Milner cousins and I went kayaking down the Belly River again this weekend. The water has settled at a bearable temperature and the weather couldn’t have cooperated with us better today.

As we were floating down the river we saw a gaggle of 5 teenage girls gathered around the river bank, but all looking at something and all of them oblivious to our presence. Corry said, “Hi.” And they all jumped individually as they spun around and saw us drifting by. We chatted with them for a minute. The girls were visiting their grandparents for the holiday weekend. It turns out they were inspecting a cow’s skull they had found in the mud.

When I got back to my jeep I discovered bird droppings inside my car. How improbable is that? I’m guessing that when I left the door open to get my gear together that a bird let one fall at such an angle to precisely miss my seat and hit the arm rest. If they could only bomb that accurately in Iraq…

The video Aaron took of me last time is online. The water was higher today, but the video gives you a pretty good idea of what it was like today. 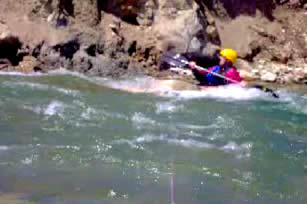