60 Minutes is reporting that Cold Fusion is gaining traction and may soon be vindicated. I’m a skeptic but I want to believe.

When first presented in 1989 cold fusion was quickly dismissed as junk science. But, as Scott Pelley reports, there’s renewed buzz among scientists that cold fusion could lead to monumental breakthroughs in energy production. 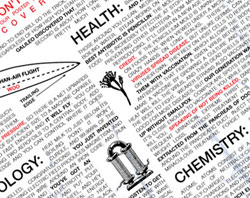 Imagine you’ve gone back in time, but you’re hankering for a few of the amenities you’ve grown accustomed to living in the 21st century. Hopefully you remembered to bring your Time Traveler’s Cheat Sheet, a handy guide to inventing some of life’s essentials.

A moving electric field produces magnetism, and vice versa, wrap copper wire around an iron core and run electricity through it, and you’ve got an electromagnet. Don’t have any electricity? Put a magnet on a water wheel, and put your copper-wrapped iron beside the wheel, and hey presto, you’re converting mechanical energy into electricity.

In 1962, the IBM 704 became the first computer to sing. The song was Daisy Bell. John Kelly and Carol Lockbaum programmed the vocals and the accompaniment was programmed by Max Mathews. This performance was the inspiration for the famous scene in 2001: A Space Odyssey in which the HAL 9000 computer sings the song as it is deactivated.

In 2009, the song has been recreated using 2000 clips of human voices collected via Amazon’s Mechanical Turk. Workers were asked to listen to a short clip of the 1962 recording and then prompted to repeat the sound as best they could.

See the Bicycle Built for 2000 project page for an interactive look at each sound clip.

Listen to Dan Ariely’s talk, presented in February 2009 at the TED conference, about his experiments in predictable irrationality. He explains how bugs in our moral code make us think it’s okay to cheat or steal sometimes but not others.

No flying cars yet, but the future is just about here. Check out this amazing device that only costs around $350 for the parts—it’s basically a camera, projector and smart phone interacting with the world around us.

The Thatcher effect is the phenomenon in which it becomes difficult to detect local feature changes in an upside down face, despite identical changes being obvious in an upright face.

Here it is, in video format:

See another example of the same.

I can’t express the level of skepticism I feel over this Discovery Channel clip claiming that subliminal ring tones can affect the way our minds think and even the way our bodies grow.

Hideto Tomabechi made headlines in June 2005 when he started selling a ring tone that he claims could make a woman’s breasts grow larger just by listening to it.

If ring tone breast enhancement smacks of gimmickry, the theories behind it are taken very seriously indeed. Over the last ten years, Dr. Tomabechi has been lecturing on how to apply his mind manipulating techniques to the threat of terrorism.

His services have been in demand ever since March 1995 when members of the Aum Shinrikyo doomsday cult released a nerve gas called sarin into the Tokyo Subway System which injured 5000 people and killed 12. Dr. Tomabechi was asked by the Japanese police to deprogram some of the brainwashed members of the cult by applying his “sound” theories.

For the record, there have been no scientific studies which demonstrate anything remotely close to subliminal commands influencing motives. It all boils down to the fact that subliminal messages designed to change behaviour DO NOT WORK.

About 15 years ago, my cousin Mike got a copy of the movie Gizmo! for Christmas. He raved about how hilarious is was, but it was in black and white and released in 1977; I was sceptical.

Gizmo! is a documentary about some of the thousands of inventions that did things we never thought needed doing, or in ways we never considered doing them. A respectful, yet humorous tribute to the inventors whose vision, however far-reaching, was just a little off the mark.

After watching it, our whole family fell in love with it and to this day, my dad still occasionally impersonates Cecil from the first scene. “I don’t know, but I’ll try!”

Here is Gizmo!, embedded for your own viewing enjoyment.