I accidentally let the insurance on my car lapse so its been sitting in the garage for the last couple of weeks. I finally got it reinstated but not until I had gone to quite a lot of trouble. I highly recommend that if you move and have insurance from a company in your old city, that you find a new local place because frankly its just not worth the hassle. During the time that I was without my car I relied on Anna to drive me around and when she couldn’t then I was left riding Anna’s bike. (I’m so pathetic I don’t even own a bike). Last Thursday Anna was in Calgary for an audition and so I rode her bike over to the University. I somewhat lost track of time finishing some old assignments that were long overdue and when it was time to come home it was really dark out. I discovered a path that is actually a substantial shortcut from the road but it was REALLY dark. I rode down the hill pretty slowly – not wanting to die and all – and then thought of a really good idea. I would use my little key chain “phaser” light that Jackie gave to me to light the way. Well no sooner than I turned on the light that I saw a weasel zip across the path in front of me. How many weasels do you think had whisked across my path before the light was on? Anyway after all the biking I decided that even with Anna’s gel seat, her bicycle is still not very comfortable to ride for a long time.

When Anna returned on Friday night she brought along two of her sisters and their little dog. Lana went home yesterday but Pam will be visiting for the next three or so days. During the time that Anna has been spending with her sisters and I guess before she got back I’ve been doing so work around the house. I finally got that old lawn mower working and I also cleaned out the gutters and watered the grass. It turns out that the sprinkler that was left with the house actually doesn’t really work. It just shoots water straight up instead of swivelling back and forth. I’m about to go out and buy a new one.

When I got home the other day I was in for a good surprise. My roommate got a new job at Robin’s Donuts and left three-dozen donuts sitting on the table with a note that I could help myself. This pleases me. :)

Anna, her sisters, and I, took in The Phone Booth (Official Site / Preview) on the weekend. First off I have to admit that this movie did keep my attention the whole way through, but it really lacked in any kind of scene change or progression. The tension peaks early on and then holds until the end of the movie. Frankly nothing really happens – at least nothing unpredictable. Actually the most unpredictable part was that the police were so slow to arrive on the scene (if you’ve ever been to Times Square then you know how many police officers there are everywhere) and how poorly they reacted to the situation. It’s like the writers haven’t ever watched Real TV or even Cops and just have no idea how the police service actually works. Anyway I don’t regret seeing it but if I ever see it again – it will be too soon.

I’m a little embarrassed to admit this, but I missed my Music 1011 final. How did that happen? It’s a combination of factors really. I have been attending Music 1011 at 11:00am on Mondays, Wednesdays, and Fridays. I had special permission since I am registered in the 3 o’clock class. Well the 11 o’clock class is supposed to have their test on the 24th but my 3 o’clock class had their test last week and well I got mixed up on which day for which class and if I was supposed to attend the test for the class I was registered or the class that I attended. Anyway I could be in some serious trouble if I am not able to take it on the 24th but I’m just hoping things will work out for me. They usually do.

The presentation of my book was successful as expected. To celebrate, Anna-Maria and I, are ordering pizza and watching Maid in Manhattan on DVD.

It might be too early to say that Maid in Manhattan is just a chick flick not worth watching, but I’ll give Anna-Maria the benefit of the doubt and sit through it with her.

The other night we rented The Count of Monty Cristo. I give it 7 out of 10. For those of you that don’t know, I can be very critical of movies. So a 7 out of 10 is pretty good. Anna gives it a 7 or an 8. Glad to see I’m on the right track, after all she is the dramatic one. 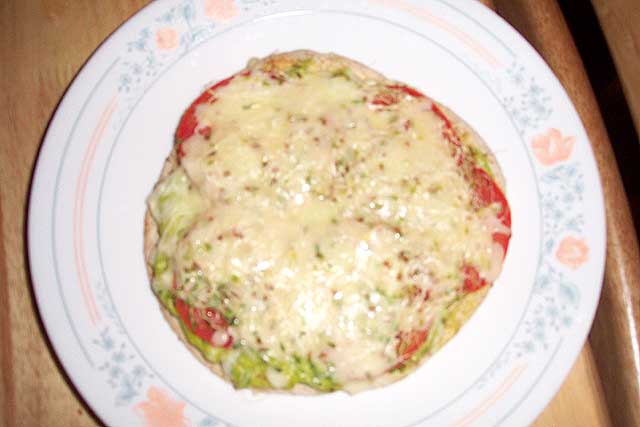 Anna-Maria made the second recipe from her Poppy yesterday night. I have the picture of how it turned out and I’d have to say – it was just as good or better than the first recipe. I can’t wait til we make the next one.

What you see in the picture is a pita, covered in smashed avocado, cheese, tomato, fresh garlic, and more cheese. You can find the recipe for the Avocado melt in the section on the right (Just click to expand the menu). Anna-Maria and I decided only to add the recipes after we try them, so there will be more added in the coming weeks. By the way, if you just make the Avocado part, it makes a great dipping sauce along with sour cream and salsa.

Anna-Maria was emailed a bunch of recipes from her “Poppy” back East. She tried one last night that was quite good. We’ll post each recipe as we try them along with suggestions. I figure it was a meal that Mom and Dad would just love. (Beans and Corn and stuff all mixed together). Just wait for the recipe.

Anna-Maria and I are strongly considering going to Edmonton on the 28th of March to audition for a job at Disneyland. I would have to get a working visa first though and I am not sure if that will be possible, given the short amount of time I have to do it. It would be really cool to work at Disneyland though. I’ll keep you updated.

Update: We never we to Edmonton for an audition but we did end up flying down to Anaheim where Anna auditioned and got offered a job at Disneyland. Also of interest — Anna tells in detail what it’s like to wear a Disneyland costume.

Hello all! Boy, have I ever been busy lately. I am registered in six classes and I am in two plays- both of which go up on Tuesday. However don’t feel too bad for me, there is one class I don’t even go. I just show up for the tests. Hey! Like the one I had today! I should probably feel ashamed or something for not going to class, but I don’t. I feel proud. I’ve never felt so proud of myself. There’s not much that compares to the feeling of doing well on a test, for a class that you only went to twice all year. On quite a different note, do you all remember my weight issues? (What can I do? I’m socially conditioned to believe that I could always use to lose an extra ten pounds. I learned about that from the textbook for the class I never go to.) Well in the play I’m in called Peer Gynt, I have to wear a boustier- a belly shirt boustier! That’s right ladies and gents, it’s also sleeveless. On top of that I have to wear tiny (very tiny) white spandex shorts with a see through skirt over top. I’m freakin out. You have to admit that that would make anyone feel a little self-conscious. Anyway, I’ve gotta get going. I will write again soon. Let me know what you think about the outfit. Jeff will fill you in on what I did for the role on top of skimpy clothes.

I haven’t seen Anna’s play so I don’t know exactly what she is going to be doing except that it is somewhat sexual in nature. (I believe something to do with a pig troll rutting on stage). All I can say is you wouldn’t catch me in such a compromising roll. On a side note, Anna had her eyebrows waxed in preparation for the show.

I just saw one of my professors walking down the hall and thought that now would be a good time to comment on his strange choice of names: Anonymous William Smith. I just call him Wil. I guess one day he decided that he would “spice things up” by changing or eliminating his middle name and then adding Anonymous as his first name. That’s the name he uses for all his art and whatnot. I thought I would have more to say about that, but I guess I don’t. I’ll just let you think about it.

In other news I qualified for Junior Nationals for swimming. The times are faster than Canada West but slower than the CI’s. I don’t think I’m going to go though, because none of the other teammates that qualified are going – and it is $250, not to mention it’s over reading week – which I’ll need to use to catch up on my homework.