The battle over “Stairway to Heaven” will rage on for at least one more chapter as the copyright infringement case heads to a federal appeals court. Rolling Stone Magazine has the details.

At the crux of the “Stairway” lawsuit is the accusation that the IV classic copies a riff found on Spirit’s instrumental “Taurus,” which predates the 1971 single. In his appeal, Malifoy wrote that the jury did not find the two songs “substantially similar” because they were not permitted to hear the version of “Taurus” that Jimmy Page allegedly ripped off.

After watching The L Magazine’s The Evolution of the Modern Blockbuster Movie (via) I got thinking that I had never actually read the famous Batman – The Dark Knight Returns comic series (wikipedia entry) from 1986 that was used as a rough basis for Tim Burton’s Batman (1989).

I remember hearing about Frank Miller’s, soon to be a collector’s item, The Dark Knight Returns and had always wanted to read it, but I was a bit young for its graphic content and besides, I didn’t exactly have any disposable income for comics when I was 7.

However, as I read it this evening, I came across a page that I found pretty interesting. On page 89 of book two, the comic makes a reference to backmasking in Stairway to Heaven. I’m posting it here to show just one more way the legend crept into popular culture. The relevant panels after the jump.

END_OF_DOCUMENT_TOKEN_TO_BE_REPLACED 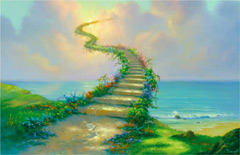 Andrew Goodwin, a professor of media studies at the University of San Francisco, wrote a nice article on Led Zeppelin’s most famous song, Stairway to Heaven, that fans will find worthwhile reading:

justcurio.us is an anonymous question and answer system, open to anyone, with one simple rule: to ask a question, you must first answer someone else’s question.

Here someone asks the question: Does Stairway to Heaven have satanic messages when played backwards? Please feel free to add you opinion.

Back in April I received an email about my Stairway to Heaven backwards clip. I know there is probably just as much chance that what this guy says is completely made up as true, but nonetheless he emailed me back yesterday and whether it’s true or not I find the possibility interesting.

Hey dude, amazing what you can find on the net when your bored, pretty cool site, some of the lyrics im really skeptical about but hey thats life.

The main thing i wanted to say was my uncle’s cousin is Robert Plant and the next time they get together i’m gonna ask if i can tag along and i’ll ask Rob about the lyrics, more than likely he’ll say it’s all “Bollocks” but hey — Worth a go.

To which I replied:

I figured it was bound to happen that eventually my site would reach someone from the band. Let me know what he says.

Yesterday I received the following:

Hey, i spoke to Rob a week ago and when i asked him he kindly replied “Not all this bollocks again” but he swore that the lyrics were just as they were and nothing was intentionally there when played backwards.
So words from the horses mouth seems that people are j[u]st reading too much into the song, always good to have a bit of controversy though.

So there you (apparently) have it. Robert Plant, member of Led Zeppelin and the writer of Stairway to Heaven, thinks this whole backmasking controversy is a bunch of bullocks. It’s too bad he didn’t get a photo with Rob, that would have gone a long way in knowing that he really did talk to him.

I received an email a couple of months ago from Michael R., and thought I should share it. Those coming here from my backmasking page may find it interesting. Michael writes:

I saw Simon Singh, author of ‘Big Bang’, use your Stairway to Heaven backwards lyrics in a lecture to make a point about how the brain imposes order on gibberish when it expects to find order, like words, where there is none. I am an ophthalmologist, and specialize in glaucoma. This is exactly the same thing the brain does when a glaucoma patient begins to lose peripheral vision. They are not aware that they have blind spots in the periphery of their visual field because the brain fills in the blank spots by continuing the pattern in the area surrounding the blind areas. This pattern completion is a lot like what goes on in interpreting the backwards Led Zeppelin lyrics.

Because I’ve noticed some people searching for the “full lyrics to Stairway to Heaven reversed” and probably find my backmasking page lacking in that regard, I will post an email that I received this morning, partly here and partly in the comments. (It’s too long to include the whole thing on the main page.)

Well, you have certainly caused a stir here. It seems that everybody is flocking to your site. Nice work. I must tell you, though, you have it wrong. Here are the lyrics to the part that you have on your site:

So here’s to my Sweet Satan.
The other’s little path
Would make me sad,
Whose power is faith.
He’ll give those with him 666.
And all the evil fools,
they know he made
us suffer sadly.

I have discovered that the ENTIRE Stairway To Heaven is a full and COMPLETE backwards message. EVERY word from start to finish is undeniable and distinguishable.

END_OF_DOCUMENT_TOKEN_TO_BE_REPLACED

A couple of days ago I received the following email. Those interested in my backmasking page might find this interesting.

Your site really got me interested in looking up information about this and I took a lot of what I already knew and compared it to the things I learned to get a pretty good idea about these backward messages.

Here’s someone else’s lyrics for the whole song…
http://web.stargate.net/zeppelin/
features/sth-reversed/index.html
Interesting how if you read the part where it says
“And all the evil, it was there, they made our souls must have Satan” and you listen to it, I still sounds like this is correct, but if you read your version it does too, I heard ‘sad satan’ before I read your lyrics

I listened to your part of the clip before reading the lyrics and I could hear some key things in it (666,sad satan,oh satan )but the other parts were very tough to interpret. Once someone reads the lyrics and sees them as one thing, it is hard for your mind to view as anything else until you see it a different way.

Link from http://www.popex.com/ — if you go here it explains that it really doesn’t have to be satanic, and probably isn’t. The forward version says “yes there are two paths you can go by, but in the long run there’s still time to change the road you’re on.” It basically says that this guy believes that he’s saying the path to satin will make you said, he also proposes the idea that satan may be a metaphor for all sadness and suffering.

If you go to http://www.reversespeech.com/Simple_Examples.htm it will give you many examples of things people said that say something else backwards. The guy on this site studies it.
I read partially from this site but mostly from some other site that the subconscious mind can interpret things backwards, and understands it as fact. However conscious decision making skills can override your subconscious mind. I learned before this that your instinct is based on facts you have gather. According to some, the more times you have heard those messages played backward, the more you get in your head to do these thing till it becomes a point where your instinct tells you to do something.

You should also check out Queen’s “another one bites the dust” backwards if you haven’t heard about it already. I won’t tell you what it says backwards, because I think your view may change on what it says but it was pretty clear to me, even before I heard what the lyrics were. However I read from some biased article (with no actual proof) that 80% of people who hear “another one bites the dust” backwards didn’t know what it was until given the lyrics where 100% said they thought that was correct.

Another freaky thing is the pokemon rap where it says “gotta catch em all” backwards says “oh satan, oh satan” sounds freaky, it can be found here, with many other clips of songs that appear to say something backward.